In St. Paul’s Letter to the Galatians, he wrote that he rebuked the first pope, St. Peter, “to his face because he clearly was wrong.” 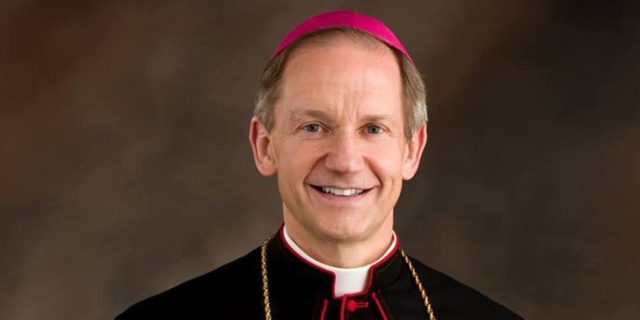 SPRINGFIELD, Ill. (ChurchMilitant.com) – In a rare move, the bishop of Springfield, Illinois is publicly correcting fellow Illinois prelate Archbishop Blase Cupich of Chicago and his false notion of “conscience.”

{It is indeed rare for a bishop to publicly correct a fellow bishop.  Abyssum has, regrettably, had to do it on a number of occasions and has paid for doing so by becoming persona non grata to some of his brother bishops.  But it is unheard of that a suffragan bishop would publicly criticize his metropolitan, yet that is what has happened in this case.  Bishop Thomas Paprocki is a Suffragan Bishop to Archbishop Blase Cupich who is the Metropolitan Archbishop of Chicago.}

In a letter to the editor published over the weekend in The State Journal-Register, Bp. Thomas Paprocki responded to a local dissenting Catholic who had praised Abp. Cupich for his erroneous remarks about Holy Communion. John Freml, author of a letter to the editor of the paper and local leader in the dissident groups Call to Action and Equally Blessed, had written on December 20:

As Archbishop Cupich said, “I think that when people come for Communion, it’s not up to any minister who’s distributing the Eucharist to make a decision about a person’s worthiness or lack of worthiness. That’s on the conscience of those individuals.”

I hope that local Catholics who have previously refrained from participating in Communion will take to heart Jesus’ message: “Take this, all of you, and eat it.” Remember that Jesus welcomed everyone to the table without condition, even Judas.

Freml was referring to Cupich’s recent remarks made during and after the 2015 Synod on the Family, where he implied that Holy Communion should be open not just to the divorced and remarried, but also to others in “irregular unions.” At a Synod press briefing in October, Cupich had said, “When people come to a decision in good conscience, then our job with the Church is to help them move forward and to respect that. The conscience is inviolable, and we have to respect that when they make decisions, and I’ve always done that.”

“[it] is important to set the record straight, and that, contrary to Cupich’s claims, Canon 916 directs those ‘conscious of grave sin’ to refrain from receiving Holy Communion.

The bishop went on to clarify that Canon 915 mandates clergy to withhold Communion from manifest, public, grave sinners. This includes those joined in invalid, non-sacramental marriages, considered adultery in Catholic teaching. Refusing Communion to such people is not about “assessing personal worthiness,” Paprocki explains, but rather meant to protect the Sacrament from sacrilege as well as prevent the harm of scandal “caused by someone’s public conduct that is contrary to the teachings of Jesus Christ.”

It is true that Jesus welcomes everyone. But as Jesus said at the Last Supper, so we say in the eucharistic prayer at Mass, Jesus poured out His blood “for you and for many,” since not everyone accepts what Christ offers, just as Judas did not accept what Christ offered him.

Bishop Paprocki has headed the Springfield diocese since 2010, and during his tenure has developed a reputation for orthodoxy. Archbishop Cupich, on the other hand, has developed a more questionable reputation during his brief time as head of the Chicago archdiocese, and has a history of willingness to offer the Eucharist to those not in communion with the Church.

In November 2014, when asked point blank on CBS’ “Face the Nation” whether he would give Holy Communion to pro-abortion politicians, Cupich answered, “I would not use the Eucharist or, as you say it, the Communion rail as a place to have those discussions or a way in which people would be … excluded from the life of the Church” — this in spite of the fact that his position contradicts canon 915 of the Catholic Code of Canon Law, which states that those “obstinately persevering in manifest grave sin are not to be admitted to Holy Communion.”

And in a televised funeral Mass in April over which Abp. Cupich presided, the Protestant governor of Illinois, in violation of the norms of the Church, was given Holy Communion — a sacrilege. When ChurchMilitant.com reached out to the archdiocese to ask whether it had contacted the governor’s office ahead of time to advise that non-Catholics should not approach to receive Holy Communion, the archdiocese responded by saying that “when any person presents himself or herself for Holy Communion, the Minister of Communion presumes that the person can receive Communion.”

2 Responses to In St. Paul’s Letter to the Galatians, he wrote that he rebuked the first pope, St. Peter, “to his face because he clearly was wrong.”