NARRATIVE OF POPE BENEDICT’S DEPARTURE FROM THE VATICAN

Correction: The date of the last interview between German writer Peter Seewald and Emeritus Pope Benedict was May 23, 2016, less than four months ago, not May 23, 2013, more than three years ago, as I wrote in several previous emails. I apologize to readers for this error.—Robert Moynihan 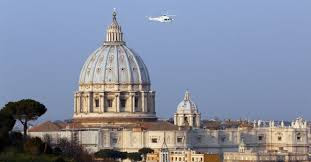 A Vatican official told me yesterday that the reflections of Emeritus Pope Benedict contained in the new book-length interview with German author Peter Seewald which came out on September 9, eight days ago, as Last Conversations (“Ultime Conversazioni” in Italian), were originally not intended to be published during Benedict’s lifetime.

Benedict granted the interviews — which Seewald tells us took place “just before, and after the resignation” (“poco prima, e dopo le demissioni” — as a help to Seewald, who is preparing a major biography of the Emeritus Pope, the official said.

So Benedict agreed to the interviews with the understanding that they would be used in the writing of the biography, which would come out after his death. How, then, did the book end up being published now, while Benedict is still alive?

In a new interview just given to the German magazine Christ un Welt (“Christ and the World”) Seewald explains what happened. The new interview is discussed by Luis Badilla, director of Il Sismografo (“The Seismograph”) — a very useful website for those who follow Vatican affairs, since it contains dozens of links daily to articles from the global press on Vatican and Church affairs — in an article posted today.

Seewald says Benedict’s words seemed so important to make clear the voluntary nature of his resignation for reasons of health that he, Seewald, decided to ask Benedict if he might not publish the interviews now, in this book, while Benedict was still alive.

Seewald notes that there have emerged many “legends and theories” of “a supposed conspiracy according to which Benedict’s renunciation of the papacy was not voluntary, that he was obliged to resign by scandals and even by blackmail.”

The publication of these interviews now was important “to put an end to such senseless tales,” Seewald says.

“So, after transcribing the tapes, I tried to convince Benedict to allow me to publish this material now,” Seewald says in the Christ und Welt interview.

“He, in the end, set one requirement: that Pope Francis would agree,” Seewald says. “There were no obstacles (from Francis).”

So Last Conversations was published now, with Benedict still living.

The Tolling Bells of Rome 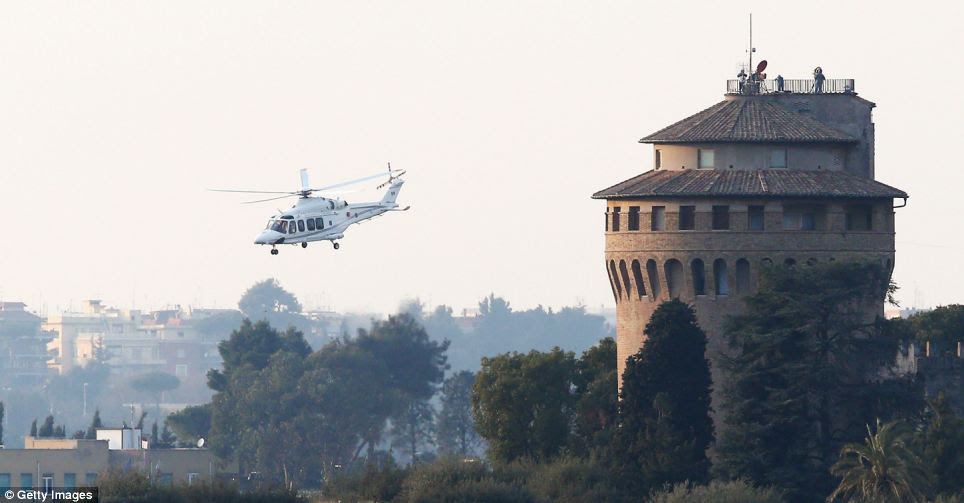 I will never forget the day Pope Benedict left the Vatican by helicopter, bringing his papacy to an end.

As Benedict left the Vatican by helicopter, he sent his last Twitter message as Pope: “Thank you for your love and support. May you always experience the joy that comes from putting Christ at the center of your lives.”

To observe the helicopter flight, I decided to go to the highest point in Rome, to the top of the Janiculum Hill, to the piazza surrounding the statue of Giuseppe Garibaldi.

From there, by leaning over the top edge of the old wall of Rome, the Aurelian Wall, built by the Emperor Aurelian in 270 A.D., one can see the cupola of St. Peter’s clearly, and then, by running to the other side of the piazza, look out over Rome and see Castel Gandolfo in the distance, to the east of the city, the Pope’s destination that day.

The sky still blue though a chilly February evening was about to descend.

And then it happened.

The white helicopter lifted off from the heliport at the top of Vatican City, near to the Vatican walls at the end of the Vatican gardens, and began to circle the dome of St. Peter’s, as if the Pope wanted to look down at Vatican City one last time.

I shook my head.

“It is really happening,” I thought, with wonder and perplexity.

With wonder, because the imagery was so striking: a Pope, the Vicar of Christ on earth, dressed in white, riding in a white helicopter, its blades churning through the air, with the dome of St. Peter’s Basilica rising starkly above the surrounding buildings. It was like watching the scene of a man making a marvelous, daring escape from a prison — Pope Benedict as James Bond, getting away at the last moment, riding a white helicopter into freedom…

Perplexity because I did not understand at all why this was happening, or what it meant. Despite the Pope’s words that he was resigning from the papacy because he felt he no longer had the strength to carry out the duties of the Successor of Peter in an effective, dignified, fitting way, in my heart I still wondered whether he might not have continued. I, like some of his closest assistants, including Archbishop Georg Gaenswein, his personal secretary — who wept openly as he walked with Benedict down the stairs of the Apostolic Palace for the last time, before the Pope got into a car and drove from the Cortile San Damaso through the Vatican gardens and up to the heliport — wondered if it might not have been possible to make things a little easier for Benedict, so that he might have been able to feel strong enough to remain Pope for at least a little longer. 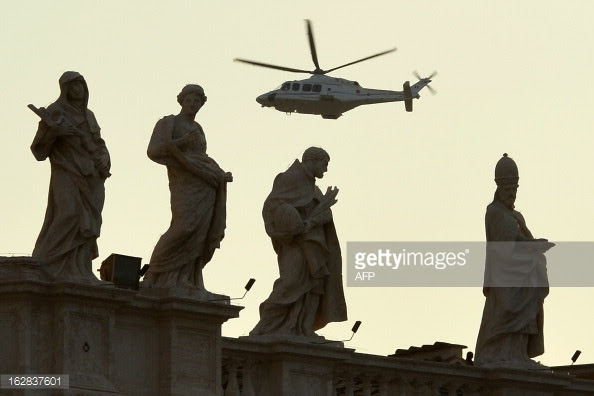 Bells rang out from St Peter’s Basilica and churches all over Rome as the helicopter circled Vatican City and flew over the Colosseum to give the pontiff one last view of the city where he had been bishop.

I felt disoriented and confused by the departure from the Vatican of a Pope I had met, talked with in his offices and in his private apartment, walked with in Borgo Pio and St. Peter’s Square, interviewed many times, and written about in Inside the Vatican for nearly 25 years.

The helicopter left the dome of St. Peter’s behind, and headed out over the center of the old city of Rome. I ran from one side of the piazza to the other.

Leaning over the wall, all of Rome stretched out below me. My eyes fixed on the white helicopter, I saw Benedict pass over the Tiber, cross over the Roman Forum and the Colosseum, cross over the cathedral of the city of Rome, St. John in Lateran, cross over over the countryside that stretches out toward the Alban Hills, and then set down in the gardens at Castel Gandolfo, about 15 miles away.

From the balcony of the castle, he told the crowd in the piazza below, many of whom were crying, that he would “simply be a pilgrim” and that he was now “starting the last phase of his pilgrimage on this earth.”

He then turned and went inside the villa, never to be seen again as Pope.

So it was official: Benedict was no longer Pope.

I did not know at the time that, as he took off from the Vatican, Pope Benedict was able to look down on the roof of the Casa Pastor Bonus [the “House of the Good Shepherd], a pilgrim’s residence just outside and in back of the Vatican’s walls, and see placards lined up with the words “Dio gliene renda merito” [“May God reward you”].

Now we know that he saw those signs, and was moved nearly to tears.

We know because, in his new book of conversations with Emeritus Pope Benedict XVI, Ultime Conversazioni (“Last Conversations”), Seewald includes this little fact, previously unknown because up until now the former Pope has said nothing publicly about his feelings and experiences after leaving the papacy in February of 2013.

Seewald asked the former Pope what he was thinking about as that helicopter took off.

“I was deeply moved,” Benedict tells him. “The cordiality of the farewell, also the tears of my collaborators. (His voice breaks with emotion) On the roof of the Casa Bonus Pastor [a hotel for pilgrims just outside the Vatican walls] there was written in huge letters ‘Dio gliene renda merito‘ [“May God reward you”].”

And at precisely this point, Seewald tells us that, recalling that moment, Emeritus Pope Benedict began to weep (“il papa piange,” meaning “the Pope  weeps”].

It is the only time in the entire book where Benedict displays such emotion.

“I was really deeply moved,” Benedict continues. “In any case, while I hovered overhead and began to hear the bells of Rome tolling, I knew that I could be thankful and my state of mind on the most profound level was gratitude.”

And with those words, with the tolling of the bells of Rome in the background, this section of the book comes to an end.

But what had happened in the weeks and months before that had led Benedict to this decision?

Through Seewald’s questioning, Benedict for the first time in this book gives us some answers and some deeper insights regarding his reasons for resigning the papac