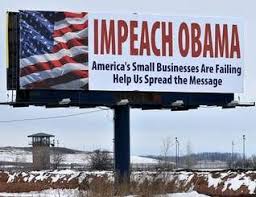 As the Affordable Care Act continues to implode and the news is daily filled with stories about violations of the Constitution of the United States that Barack Hussein Obama swore to uphold at his two inaugurations, there is more and more talk about his impeachment.  It is obvious that many people do not understand the constitutional provisions for the removal from office of a president.  It is a two step process.  First the House of Representatives impeaches (this is analagous to an indictment by a grand jury)  and then the president is tried before the Senate.  Only upon conviction by the Senate on a two-thirds vote can the president be considered removed from office.  Here are the pertinent passages of the Constitution:

Article 2,  Section 1
5:  The House of Representatives shall choose their Speaker and other Officers; and shall have the sole Power of Impeachment.
Article 2, Section 4
The President, Vice President and all civil Officers of the United States, shall be removed from Office on Impeachment for, and Conviction of, Treason, Bribery, or other high Crimes and Misdemeanors.
Article 3.
6:  The Senate shall have the sole Power to try all Impeachments.  When sitting for that Purpose, they shall be on Oath or Affirmation.  When the President of the United States is tried, the Chief Justice shall preside:  And no Person shall be convicted without the Concurrence of two thirds of the Members present.
7:  Judgment in Cases of impeachment shall not extend further than to removal from Office, and disqualification to hold and enjoy any Office of honor, Trust or Profit under the United States:  but the Party convicted shall nevertheless be liable and subject to Indictment, Trial, Judgment and Punishment, according to Law.

I am a retired Roman Catholic Bishop, Bishop Emeritus of Corpus Christi, Texas
View all posts by abyssum →
This entry was posted in POLITICAL LIFE IN AMERICA, PRESIDENCY OF THE UNITED STATES, Uncategorized and tagged IMPEACHMENT OF OBAMA, President Obama, Senate, the Senate. Bookmark the permalink.
%d bloggers like this: