HAPPY ANNIVERSARY, JUSTICE CLARENCE THOMAS !!! I PRAY THAT GOD WILL BLESS YOU, AND US, WITH MANY MORE YEARS ON THE SUPREME COURT !!!

Celebrating 25 Years of Clarence Thomas on the Supreme Court: His Close Friend Spills the Beans

Despite the setback 25 years ago caused by Anita Hill’s accusations during his confirmation hearings, even left-wing scholars agree that Thomas has become one of the most esteemed justices on the high court. 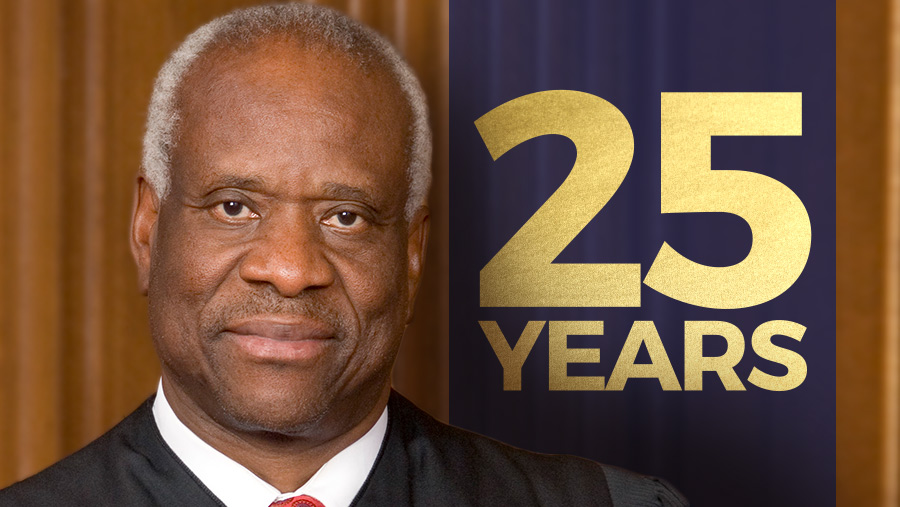 October 23 marks Clarence Thomas’s 25th anniversary as a Supreme Court Justice. I spoke with his longtime friend Mark Paoletta about his legacy. Paoletta got to know Thomas while serving as Assistant White House Counsel to President George H. W. Bush, where he was central to the campaign to get Thomas confirmed to the high court. Paoletta is now in private practice in Washington, D.C., and spends time with Thomas and his wife Virginia.

I asked Paoletta how they were able to get Thomas confirmed, considering the Reagan administration’s failure to convince Senate Democrats to confirm conservative Robert Bork. The attacks on Thomas began as soon as he was nominated. It was like “whack-a-mole,” he said, fighting accusations as soon as they popped up. To his credit, Bush never gave up on Thomas’s confirmation.

But nothing, he continued, “prepared us for fabrication by Anita Hill.” She alleged that Thomas had sexually harassed her when she worked for him. Refuting the accusation was difficult because they had to prove a negative.

Both sides of the Senate Judiciary committee decided there was not enough evidence against Thomas. After political maneuvering designed to embarrass Thomas, the committee held open hearings, broadcast over C-SPAN, so everyone could watch them, unfiltered by the media.

“Her testimony didn’t add up. She was not telling the truth,” Paoletta said. The American people agreed. They believed Thomas by more than 2-1. And there was no gender gap: Only 26 percent of women believed Hill. The Washington Post ran an editorial saying she had had a low bar to hurdle and didn’t even do that.

There were good reasons for this. Hill twice refused to let the FBI interview her. When she finally agreed, her testimony was far different from her congressional testimony. She claimed as a corroborating witness a conversation that occurred before she worked for Thomas.

She gave the Senate the names of two women co-workers who she said would corroborate her account, Nancy Fitch and Allyson Duncan. They disputed Hill’s allegations and Fitch actually testified for Thomas. Indeed, many women who had worked with Thomas supported his version of events, and were very complimentary of him. Not a single co-worker of Hill’s testified on her behalf.

One other fact continues to speak in Thomas’s favor: In contrast to other high-profile men who have been accused of sexual harassment, like Bill Cosby and Roger Ailes, no other women came forward to report similar incidents about Thomas.

Why would someone make such allegations against a respected man like Thomas, knowing it was something she’d be remembered for too? Paoletta thinks she never intended the accusation to go public. She wanted to make the allegation behind the scenes and force Thomas to withdraw.

There seem to have been personal and ideological reasons as well. Influenced by left-wing academia, she became increasingly hostile toward the conservative Thomas.

She was a Yale-educated lawyer in merely a bureaucratic government career job, who hadn’t done well at the EEOC, or at her previous job at a law firm where, co-workers say, she was passed over for a promotion by another black woman. Thomas had hired her as a favor to a friend. Hill followed Thomas to his next job. Some of her co-workers said she had a crush on him.

While Anita Hill has drifted into obscurity, the cloud of alleged sexual harassment has followed Thomas for years. Paoletta says the left will never stop bringing it up. Since most people’s memories are foggy about the events of 25 years ago, the left has been rewriting the story.

Hill herself appeared on Meet the Press to defend Bill Clinton against his female accusers. When confronted by host Tim Russert on whether she had a double standard when it comes to sexual harassment, she responded, “We live in a political world and the reality is that we want — there are larger issues, larger issues other than just individual behavior.”

Despite suggestions that Thomas must not be terribly bright because he rarely asks questions during oral arguments, legal scholars on the left have acknowledged his brilliance in recent years.

Left-leaning lawyer and founder of SCOTUSblog, Tom Goldstein, observed in 2009, “No other member of the court is so independent-thinking.” He dismissed accusations that Thomas was merely a copycat of Scalia, and went on, “I disagree profoundly with Justice Thomas’s views on many questions, but if you believe that Supreme Court decision-making should be a contest of ideas rather than power, so that the measure of a Justice’s greatness is his contribution of new and thoughtful perspectives that enlarge the debate, then Justice Thomas is now our greatest Justice.”

Mark Tushnet, a liberal Harvard Law professor who opposed Thomas when he first joined the bench, wrote in his 2005 book A Court Divided that “what [Thomas] has done on the Court is certainly more interesting and distinctive than what Scalia has done and, I think, has a greater chance of making an enduring contribution to constitutional law.”

The Hard-Working Thomas and the Racist Elites

Thomas is one of the most hardworking of the justices. He wrote 39 opinions last term, including many concurrences and dissents. In contrast, Justices Samuel Alito wrote 19 and Elena Kagan wrote 12, the fewest of the justices. Paoletta believes there has always been some racism behind the accusations that Thomas doesn’t perform as well as the others. No one has ever suggested that Kagan is under-performing for writing the fewest opinions.

He is aware of the racial dynamics in the cases he analyzes. For example, in Missouri v. Jenkins, where the court held that Kansas City was not required to integrate inner city, predominantly black schools with suburban, predominantly white schools, Thomas wrote in a concurring opinion, “It never ceases to amaze me that the courts are so willing to assume that anything that is predominantly black must be inferior.”

While Thomas and Scalia are rightly perceived to be very conservative justices, their judicial philosophies are slightly different. Both are originalists, who believe the Constitution should be interpreted as it was written, not as a “living document” that changes its meaning over time.

However, Scalia was also a textualist, who limited his analysis of language in a statute to the words only, avoiding outside factors such as legislative intent. Paoletta describes the difference between the two: “Thomas has an original meaning jurisprudence in which he looks to understand and faithfully apply the provision at issue, as it was intended to be applied by the drafters,” he explained.

Paoletto also distinguished Thomas from the other conservatives on the court. “Thomas is firmly grounded in an original meaning jurisprudence, and has been the court’s most faithful adherent to that approach,” he told me. In contrast, “I do not think Roberts or Alito are in that mold. Thomas is also less constrained by precedent more so than anyone else on the Court.”

Thomas is unique among the justices in frequently citing The Declaration of Independence in his opinions. This comes from his core belief in the necessity of protecting individual rights and liberty, Paoletta says.

“It helped him make sense of the terrible injustices and flaws that have been present throughout our country’s history,” he told me. Thomas also relies extensively on treatises outside of case law, such as the Magna Carta, the writings of the English philospher John Locke (who influenced the founding fathers) and Blackstone’s Commentaries.

Thomas’s written legacy will probably be his opinions relating to race and to the Second Amendment. He has also been called the staunchest defender of the First Amendment by liberal civil libertarian Nat Hentoff.

How did this black man, raised by a single mom in the deep South, who attended a segregated Catholic school where he was the only black student, end up as such an outspoken conservative? Paoletta thinks it was due to an upbringing that instilled in him the values of personal responsibility. He learned conservative values from his grandfather. At first, he rebelled against them growing up, testing what he’d learned.

A defining moment came at Yale Law School when he talked with longtime Republican official John Bolton. Bolton asked him why he would want to rely on a government that enslaved his race for years. Thomas realized that government could be a threat to liberty, and that the the Constitution was structured to prevent that from happening.

Another profound influence was discovering black conservative authors like the economists Thomas Sowell, particularly his book Race and Economics, and Walter Williams. At the same time, Richard Wright’s Native Son and Black Boy were great influences.

Paoletta notes that Thomas never forgets those who helped him. His eighth grade teacher, Sister Virgilias, had such a profound influence on him that he kept track of her, and for 10 to 15 years after his confirmation, would drive to visit her at a retirement home for nuns in New Jersey at least once a year, especially on Martin Luther King, Jr., Day. Paloetta would go with him, and says Thomas would sit and talk with her for hours.

He is well liked and thought of by his colleagues, and the most accessible justice on the court. He knows everyone at the court down to the janitors, often asking about their families, and has lunch with his law clerks and former law clerks once a month, usually about 12 to 25 people. It is a very diverse, nontraditional set of clerks, with a large percentage coming from non-top tier law schools. The familial connection with his clerks is unprecedented; many clerks never get to know the justice they work for.

In his free time, Thomas enjoys sports. He is a big fan of the Dallas Cowboys and the Nebraska Cornhuskers. He is also a car and NASCAR enthusiast.

Yet his accomplishments are not always recognized. The National Museum of African American History and Culture opened in D.C. last month — and it barely mentions him. However, Anita Hill and her version of the story are prominently featured.

Paoletta believes Justice Thomas will leave “a robust judicial legacy of original meaning jurisprudence.” More importantly, perhaps, he has been and will be “an inspiring figure who was born into poverty in the segregated deep south to serve as a Supreme Court Justice.”

His other legacy is of a man who overcome an almost unprecedented public attack when he was nominated for the court, and years of criticism and insults since, and done so with great and rare dignity.