“Francis has cast his lot with the Communists and red smoke enshrouds the Catholic Church. In the words of Cardinal Joseph Zen, Francis “delivered the Church into the hands of the enemy.”

Written by  Elizabeth YoreRate this item

Francis has cast his lot with the Communists and red smoke enshrouds the Catholic Church. In the words of Cardinal Joseph Zen, Francis “delivered the Church into the hands of the enemy.”
________

“Nobody has any illusion about Red determination to eliminate all religion.” – Shanghai Bishop James E. Walsh, Imprisoned by the CCP for 12 years (1958-70) for refusing to join the Patriotic Church.

The stage was set for a new papacy. 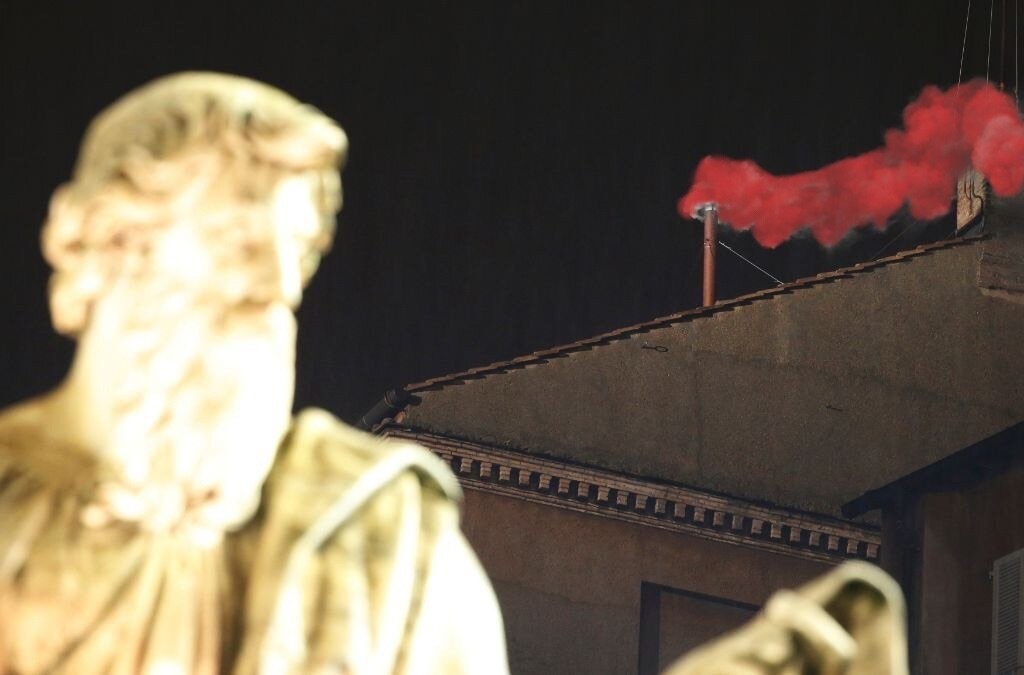 On that March evening, the Church militant were unaware of the impending danger that would befall them. With the curious and startling resignation of Pope Benedict XVI, the foundation of the Catholic Church seemed to be teetering, the ground was shifting, something was afoot, but the change was intangible and amorphous.

Seemingly, the tumultuous events surrounding the papal handover were eerily suggestive of the ominous words of Vladimir Lenin: “Sometimes, history needs a push.”

Jorge Bergoglio provided that historical push. His election would soon demonstrate that the Catholic Church was experiencing a titanic rupture, propelling the barque of Peter into treacherous waters, driven by dark forces, and engulfed by red skies. At the helm, Jorge Bergoglio, and his cadre of communist clerics and cohorts, steering the Catholic Church into the dark abyss of communism.

Seven very long and tumultuous years later, consensus builds that Bergoglio, the Black Pope, governs as the first Red Pope, a sympathetic, secretive, and cunning ally of the world’s atheistic, repressive and violent Communist regimes. The omens emerge  as Bergoglio donned his red moniker,  a cross with the crucified Jesus Christ, embedded with the hammer and sickle, the symbol of the atheistic communism. 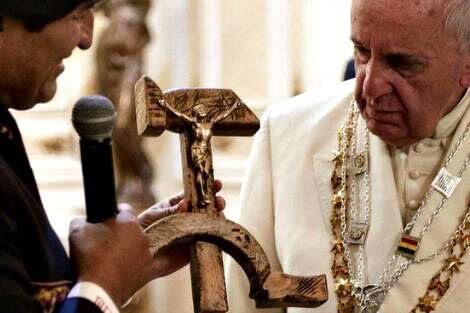 Bishop Marcelo Sánchez Sorondo, Chancellor of the Pontifical Academy of Social Sciences, known as a flack for China with his outrageous and preposterous defense of Communist China as “the best implementer of Catholic social doctrine,” or praises of the Xi government “for observing the common good.” At an organ trafficking conference where China was a participant, Bishop Sorondo unctuously stated:

China could be a model we need today to respond to globalization, a model for the dignity and freedom of human beings, a model for the eradication of the new kind of slaver-organ trafficking.”

Sorondo described the critics of the China-Vatican pact “as merely a loud minority.” Shockingly, he also praised the world’s biggest polluter, China for its “fight against poverty and pollution.”

Only 3 months into his papacy, Francis dispatches the notorious serial sexual predator and alleged Communist operative, Cardinal Theodore McCarrick to initiate negotiations with the brutal Communist regime of Chinese President Xi Jinping. Despite the fact that Archbishop Carlo Mario Vigano personally informs Francis that McCarrick is a documented sexual predator. The Pope disregards Viagno’s warning and sends McCarrick to China to restart talks with the Chinese Communists on behalf of the Vatican. 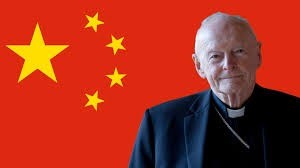 Both Vigano and McCarrick’s Rome secretary, Msgr. Figuereido confirm that McCarrick is the Pope’s personal choice to serve as diplomatic envoy to Communist China. McCarrick would travel to China a number of times on behalf of Francis, and meet with Communist officials over a potential deal with the Holy See. Ultimately, McCarrick’s trips result in the calamitous secret September 22, 2018 Vatican-China agreement, which according to Cardinal Joseph Zen, would “drive the faithful Underground Catholic Church further underground” and trigger a massive surge in widespread religious persecutions by the Communist government. 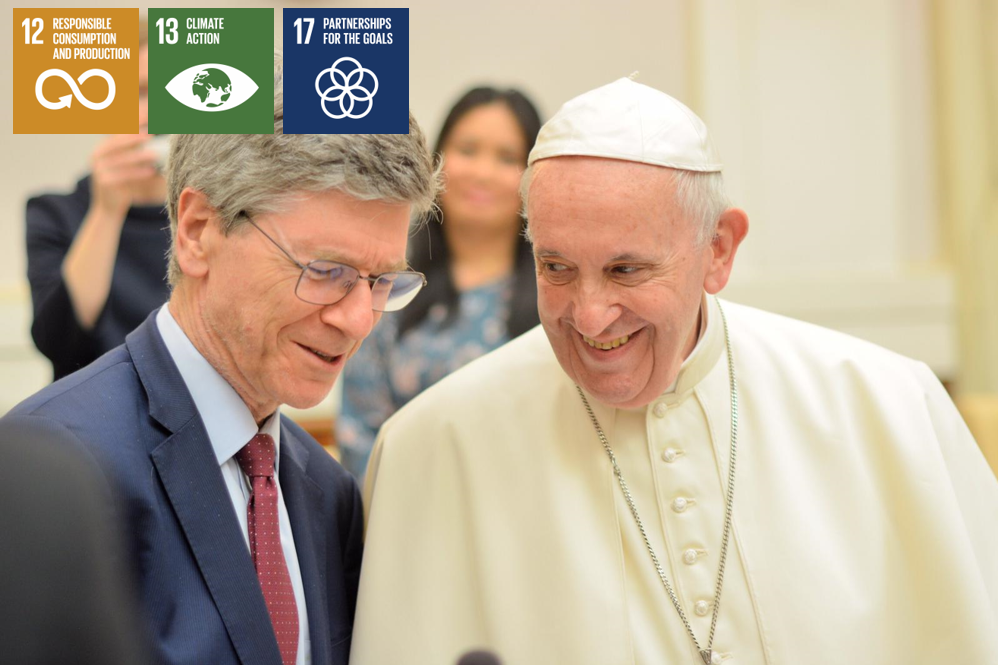 The following month, on July 1, 2013, United Nations official, Jeffrey Sachs, is honored by the Vatican with the prestigious lecture,  Vatican Lectio Marginalis at Sorondo’s Pontifical Academy. Sachs will become a close collaborator of the Pope, a fixture at the Vatican, as he directs the papal climate change agenda in close conjunction with the UN and Paris Climate Treaty.

2015- The SDGs are viewed as the goals of the globalist Communists, which has been thoroughly detailed by Michael Hichborn in an exhaustive report by the Lepanto Institute.   Francis enthusiastically endorsed the passage of the SDGs in his May 2015 papal eco-exhortation, Laudato Si,  and also reaffirmed his unwavering support of the SDGs during his United Nations address in September 2015.

Pope Francis met 6 times with Bolivian President Evo Morales, a socialist (see video below). Morales and America’s Socialist Bernie Sanders addressed the Pontifical Academy of Social Sciences on the evils of capitalism. Morales has since fled Bolivia and is in hiding and is facing charges in the International Criminal Court for “selective killings with free-shooters, ambushes, rapes and sexual assaults, hostage-taking, physical and psychological torture, state terrorism, interruption of access to food as well as water to certain cities.”https://www.youtube.com/embed/rTjm7_xQqBY?wmode=transparent

In 2014-2015-President Obama was very anxious for a detente with the repressive Cuba government of the Castro brothers. Because of the explosive nature of this highly controversial plan to normalize relations with Cuba, Obama sought back door diplomatic channels with the Vatican. Obama was assured that the Vatican was sympathetic to the Communist regime. Not surprisingly, Obama turned to the communist cardinal, Theodore McCarrick, to provide covert shuttle diplomacy with the communist regime.

Obama knew that his secret plot would be safe with Francis and McCarrick, both of whom were anxious to legitimize and normalize relations with the Communist dictatorship.  The Vatican cooperated with the Obama Administration to operate in total secrecy while they conducted covert shuttle diplomacy without the knowledge of Congress or the American people. Afterward, Raul Castro, the Communist leader, personally thanked Francis for his critical role in the negotiations. Francis visited Cuba and the Castro brothers in September of 2015.

On September 22, 2018, the Vatican signed a secret deal with the Chinese Communist Government to appoint bishops to the Patriotic Catholic Church, which is a creation of the CCP. According to the Holy See Secretary of State, Pietro Parolin, the agreement was to normalize relations for the Catholic Church in Communist China. Suspiciously, the Vatican refused to release any specifics and steadfastly guarded the conditions of the deal. The details still remain a secret, but the repercussions of the highly controversial Vatican China detente do not.  The global human rights community and several governments excoriated the Vatican for its secret China pact. The China-Vatican deal has been condemned by Congress and other U.S. religious freedom groups. The bipartisan U.S. Commission on International Religious Freedom (USCIRF) issued its 20th annual report on International Religious Freedom. One of its key findings blasts the Vatican deal:

“In September, the Vatican reached a provisional agreement with China that would allow the government a role in the appointment of new bishops; nevertheless, repression of the underground Catholic Church increased during the latter half of the year.”

The retired Cardinal of Hong Kong, Cardinal Joseph Zen, has called the deal a “suicide pact,”and “shameless surrender”  and demands that the Vatican disclose the terms of the deal. The Vatican refuses to do so. Since the signing of the agreement, religious persecution in China has skyrocketed. The Vatican deal has undermined faithful Catholics in the Underground Church. As Zen lamented, “They are forced to go deeper underground.”

2019-Hong Kong Freedom March- For months, millions of Hong Kongers take to the streets to demand freedom and democracy and to protest the repressive Chinese Communist Party of mainland China. Yet the Vatican has repeatedly refused to support the marchers. Ironically, the leaders of the protests are largely Catholic and Christian young people who are demanding that the Communist party of President Xi Jinping respect Hong Kong law. Although many world leaders have expressed support for the protestors, Pope Francis refuses to express his support. One can only surmise that he doesn’t want to anger or jeopardize his communist partners in the secret Vatican deal. On April 18, 2020, the leaders of the marches were arrested by the CCP and the Vatican maintains its silence while world leaders protest the unlawful arrests.

Francis is Silent over the Brutal Persecution of Christians and Catholics by the CCP.

2018-2020-As the CCP embarks on a  demolition derby of Christian and Catholic Churches, destroying churches, ripping down crucifixes, arresting worshippers, detaining and harassing Catholic priests, Francis and his Vatican remain shockingly mute. Not a word of protest or condemnation from the Vatican, while Christians undergo one of the worst persecutions since the brutal reign of Mao.

Nearly all global religious freedom NGOs have blasted President Xi’s persecution and destruction of places of worship. Again, Cardinal Zen pleads for help as the Chinese Catholic Church is being “murdered” while the Vatican does nothing.

2020-Among world leaders, Francis is an outlier and laughingstock for his comments which praised China’s “great commitment” to contain the coronavirus outbreak. The global community is nearly in unanimous agreement that Xi’s communist government’s engaged in secrecy and lies regarding the data and origin of the Coronavirus outbreak in Wuhan. As a result, the Chinese greatly inhibited a coordinated and knowledgeable therapeutic response.

Francis has cast his lot with the Communists and red smoke enshrouds the Catholic Church. In the words of Cardinal Joseph Zen, Francis “delivered the Church into the hands of the enemy.”
______________

Elizabeth Yore is an international child rights attorney. She is a member of Save the Persecuted Christians Coalition.Published inFetzen Fliegen

Elizabeth Yore served on the Heartland Institute Delegation that traveled to the Vatican in April 2015 to urge Pope Francis to re-examine his reliance on UN population control proponents who promote climate change.  She is an international child protection attorney who has investigated several cases of clergy sex abuse of children. She served as Special Counsel and Child Advocate to Oprah Winfrey. She is the former General Counsel of the Illinois Department of Children and Family Services and former General Counsel at National Center for Missing and Exploited Children.

1 Response to “Francis has cast his lot with the Communists and red smoke enshrouds the Catholic Church. In the words of Cardinal Joseph Zen, Francis “delivered the Church into the hands of the enemy.”