THE FUTURE OF CHRISTIANS IN EGYPT LOOKS MORE AND MORE BLEAK 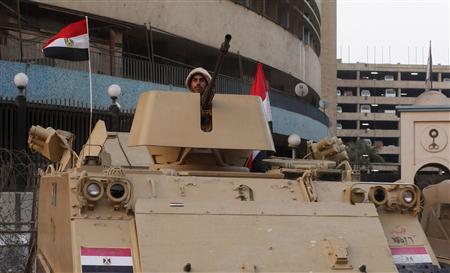 According to the decree, issued late on Monday, Egypt could see a parliamentary vote in about six months, and a presidential election would be called once the new legislature was convened.

It is the centerpiece of interim authorities’ efforts to drag Egypt out of crisis, after the military ousted elected President Mohamed Mursi last week and suspended the constitution.

In what appeared to be a gesture to Islamist parties, the decree included some of the controversial language put into the constitution last year by Islamists and which defined the principles of sharia.

Liberals and Christians had opposed the article as one of several that gave the text an Islamist tone.

Unsurprisingly, Mursi’s Muslim Brotherhood movement, which refuses to take part in the political process and demands the deposed leader be reinstalled, flatly rejected the decree.

Abdul Rahman al-Barr, a member of the Brotherhood’s Guidance Council, said “there is no need to speak about any decrees because they were issued by people without authority.”

The ultra-conservative Nour Party, Egypt’s second Islamist force after the Brotherhood, said they wanted constitutional amendments to go through a house of representatives, rather than through a committee appointed by the president.

The head of the Nour Party, Younis Makhyoun, told Reuters there had been a previous agreement that articles on sharia and identity should not be touched, but he was not satisfied with the text as it now stood.

The party initially backed the road map, lending the military Islamist legitimacy in the absence of the Brotherhood.

But on Monday, Nour said it was withdrawing from the process after 55 Mursi supporters were killed when soldiers opened fire in Cairo. However, it remains engaged in constitutional debate.

On the other side of Egypt’s political divide, and for different reasons, the decree raised eyebrows at Tamarud, the youth movement which mobilized millions to take to the streets against Mursi.

Tamarud, literally “rebel”, whose founder Mahmoud Badr was involved in the design of the road map, said in a statement the decree had not been run past them, and that they would propose amendments to the presidency in the near future.

Nathan Brown, a George Washington University professor and expert on Egypt, said the timetable for the amendments of the constitutions was rushed and provisions for consultations vague.

He added that the decree repeated many of the mistakes of a transition plan set out in 2011, widely blamed for being the cause of Egypt’s current crisis and for protecting the interests of the military, judiciary, and ultra-conservative Islamists.

Last December, Mursi’s administration rushed an Islamist-tinged constitution through in a referendum. That was seen by many as one of Mursi’s biggest mistakes during his year in office. The constitution was suspended by the road map.

Monday’s decree gave the interim head of state the power to issue laws after consulting with the government, which is in the process of being formed. It also kept an article that defines the principles of Islamic sharia law as the country’s main source of legislation.

“We are not drafting a brand new constitution. Its just the 2012 constitution with some amendments,” said Badr Abdelatty, foreign ministry spokesman.

Bishop warns: Egypt’s amended constitution is even more Islamist than the previous one

A Coptic Catholic bishop has criticized Egypt’s new amended constitution, which came into force on July 8 by government decree. “We are concerned,” said Bishop Kamal Fahim Awad (Boutros) Hanna of Minya. “We are ridiculed. The provisions that in the old constitution seemed bad in the eyes of Christians are highlighted in the new text. If we do not speak now, we will not be able to say anything.” Coptic Christians criticized Egypt’s constitution, adopted by referendum in 2012, for declaring the principles of Sharia to be the “main source of legislation.” The amended constitution, which Egypt’s new government states is provisional, “adds that the interpretation of the Sharia law should be in accordance with the body of laws developed in the early centuries of Islam,” according to the Fides news agency. In addition, Article 3 of the 2012 constitution, which discusses the rights of Christians and Jews, has been eliminated. “For Egyptian Christians and Jews, the principles of their religious law will be the main source in regulating their personal status, matters pertaining to their religion, and the selection of their spiritual leadership,” the article stated.