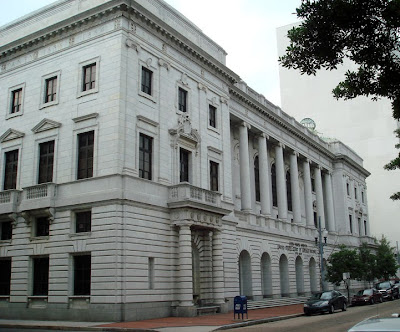 Courthouse of the 5th Circuit Court of Appeals in New Orleans

For the second time in two years, the US Fifth Circuit Court of Appeals has embarrassingly overruled Federal Judge Lee Yeakel of the Western District Court in Austin on a Pro-Life issue.

In staying Judge Lee Yeakel’s ruling against House Bill 2 (HB 2), the Court, based in New Orleans, green-lighted the 30-mile rule. Immediately, any doctor who seeks to commit an abortion must first secure admitting privileges at a hospital within 30 miles of the abortion facility. The Fifth Circuit allowed most of the new restrictions on the abortion drug, RU-486, to go into effect.

The ban on all abortions after the unborn child reaches the five-month mark of development was not challenged and went into effect yesterday.

The Office of the Attorney General petitioned the Fifth Circuit for a trial date in January of 2014 during which the full arguments on the constitutionality of two provisions of HB 2 will be heard. The plaintiffs filed a lawsuit against the 30-mile rule and against the increased regulations on RU-486, leaving the five month ban on abortions and the requirement of higher standards at abortion clinics untouched. Last week, Federal District Judge Lee Yeakel declared the 30-mile rule unconstitutional, and he approved the RU-486 measures but added wide loopholes that effectively nullify the increased restrictions. These two provisions will be the subject matter of the trial in January of 2014.

Meanwhile, these two provisions are in effect immediately — based on the late ruling that overturned Yeakel’s injunction.

“Legislators worked so hard to pass House Bill 2 because they are not only concerned about protecting the unborn, but also about women going to abortion clinics with sub-standard conditions and unsanitary equipment. The provisions being challenged in court are intended to keep Gosnell-like predators out of Texas. Ironically, one of the abortion providers for the plaintiffs testified in the hearing last week that he had secured such privileges at a number of hospitals, inadvertently helping the defense. Our Attorney General and his team have done a masterful job in defending House Bill 2 and pursuing the law taking effect immediately,” commented Elizabeth Graham, Director of Texas Right to Life.

“The other victory this week is that abortion is now banned at five months, sparing preborn children who feel pain from excruciating dismemberment. This is a historic week in Texas for the Pro-Life cause, for women’s health, and most importantly, for the unborn,” Graham continued.

The Fifth Circuit’s move to overturn the injunction could signal that this court recognizes these two provisions as common sense legislation to protect the health and safety of women who are abortion-vulnerable and that the challenge has little chance of success. The 30-mile rule has been challenged and upheld in court in other states.

I am a retired Roman Catholic Bishop, Bishop Emeritus of Corpus Christi, Texas
View all posts by abyssum →
This entry was posted in Abortion and tagged 5th Circuit Court of Appeals, abortion clinics, Federal District Judge Lee Yeakel. Bookmark the permalink.
%d bloggers like this: