THE OCTOBER SYNOD OF BISHOPS REQUIRES A LOT OF PREPARATION BY THE BISHOP DELEGATES, ARE THEY DOING IT?

THREE TOPICS FOR THE 2014 SYNOD ON MARRIAGE 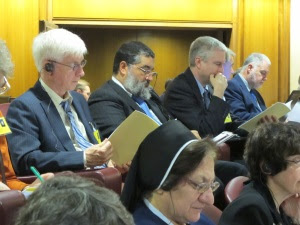 Some lay experts at the 2012 Synod of Bishops

The project to justify holy Communion for divorced-and-remarried Catholics seems to be losing steam. That’s good. As I have said many times, unless one is willing to countenance the administration of the Eucharist to those obstinately persisting in manifest grave sin (pace Canon 915), or is willing to say that typical remarriage after divorce is not the grave sin of adultery (pace CCC 2384), or is willing to say that Christ was wrong about marriage lasting till death and about remarriage after divorce being adultery (pace the New Testament!), then that project was doomed from the start. It’s now time to consider ideas that would strengthen the Church’s witness to marriage, not weaken it.

Leaving aside some important (but not urgent) ecclesiological questions about the ultimate future of the Synod of Bishops, the assembly convoked for October 2014 will not be legislative in nature and it will not make policies; instead the synod will be tasked with discussing, in an informed manner, natural and Christian marriage from pastoral and canonical perspectives. That sort of discussion requires study (general impressions and opinions about marriage are no longer adequate bases from which to respond to the crisis in marriage), and real study is hard work.

May I suggest (or re-suggest as the case may be) three marriage-related topics that need significant advance prepping if they are to be competently treated by the synodal Fathers.

1. Canonical Form for Marriage. The requirement that Catholics wed before clergy has always been an imposition on the natural and sacramental reality of marriage, and the societal conditions that supported its imposition a few centuries ago have all but disappeared today. Instead of defending marriage, the requirement of form now permits tens of thousands of Catholics annually to walk away from marital unions that we demand all others honor, deprives Catholics in such unions the graces specific to Matrimony, and relegates such unions to the status of concubinage. Further, the pastoral need to blunt the ecclesial consequences for disregarding canonical form has led to the elaboration and/or invocation of several juridically dubious “work-arounds” in such areas as jurisdiction, dispensation, and sanation. The question is: does the requirement of canonical form do more harm than good to the Church’s proclamation of marriage today?

2. The Annulment Process. In the popular mind (including many bishops’), the annulment process is a pastoral mechanism that “works” when it allows Catholics in failed marriages the chance to marry someone else. Correcting this massive misunderstanding about the vital juridic nature of the annulment process is of the utmost importance. Beyond that, however, the annulment process, being established and administered by human beings, is in need of reform especially regarding: (a) appreciating the canonical impact of widespread societal and familial dysfunction on young persons attempting to enter marriage as Christ and his Church proclaim it; (b) the actual or perceived disconnect between the interpretation accorded norms on consent as given in Rome versus that in many other tribunals around the world; (c) the real burdens and benefits associated with mandatory appeal; and (d) the feasibility of allowing third instance tribunals to function in nations that actually need them.

3. Same-sex unions vs. ‘same-sex marriage’. If there is a philosophically, juridically, and pastorally defensible distinction between same-sex unions and ‘same-sex marriage’, the time to articulate that distinction is now. Earlier ecclesiastical documents on this issue, striving (correctly!) to avoid any semblance of support for the idea of ‘same-sex marriage’, rejected same-sex unions in terms that admit of no toleration in the secular arena and indeed, if taken literally, demand sacrifices by Catholics that the Church should, in any age, be loathe to impose. Besides this important clarification of categories, the practical issues occasioned by having faithful in same-sex unions or ‘marriages’ (chiefly in regard to their admission to the sacraments and participation in Catholic public affairs) need systematic elucidation.

Some lay experts at the 2012 Synod of Bishops

A special charism is at work within synodal assemblies. Their maddening inefficiencies notwithstanding, synods can produce real insights into pressing pastoral questions and can refocus papal-episcopal leadership in regard to important matters. But it is presumption to assume that, because the Holy Spirit guides the Church, we all can just sit back and enjoy the show. Protection from error (such as officially treating typical remarriage after divorce as anything other than adultery) is one thing, but assessing and adequately responding to the pastoral exigencies of the day is something else. The 2014 Synod is all about the latter.