THANKS BE TO GOD!

A woman sentenced to death for marrying a Christian flew to Italy today and met privately with Pope Francis.

Meriam Ibrahim, 27, was sentenced to be flogged and hanged to death in Sudan for marrying a Christian and converting from the Muslim faith to Christianity. Ibrahim’s story drew outrage from people across the globe as it went viral on social media under the “#savemeriam” hashtag and world leaders condemned the harsh sentence.

Man Rushes to Save Wife Sentenced to Death in Sudan 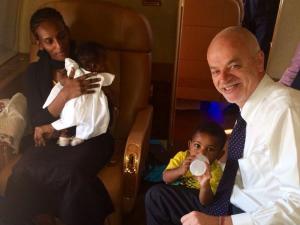 Ibrahim, who was raised by her Christian mother, was eight months pregnant at the time of her sentence and has since given birth.

Ibrahim and her family flew on an Italian government plane, accompanied by Italian minister Lapo Pistelli, the BBC reported. Pistelli posted a photo to Facebook showing the group with the caption, “With Meriam, Maya, Martin and Daniel, in a few minutes of Rome. Mission accomplished.”

The Associated Press reported that Pope Francis met privately with Ibrahim once she landed in Rome.

The Vatican said the pontiff had “a very affectionate” meeting with Ibrahim, her husband and their two small children.

Vatican spokesman the Rev. Federico Lombardi said the pope “thanked her for her faith and courage, and she thanked him for his prayer and solidarity” during the half-hour meeting.

Italy along with the United States worked for her release.

The Associated Press contributed to this report

I am a retired Roman Catholic Bishop, Bishop Emeritus of Corpus Christi, Texas
View all posts by abyssum →
This entry was posted in Uncategorized and tagged Italy, Lapo Pistelli, Pope Francis. Bookmark the permalink.
%d bloggers like this: