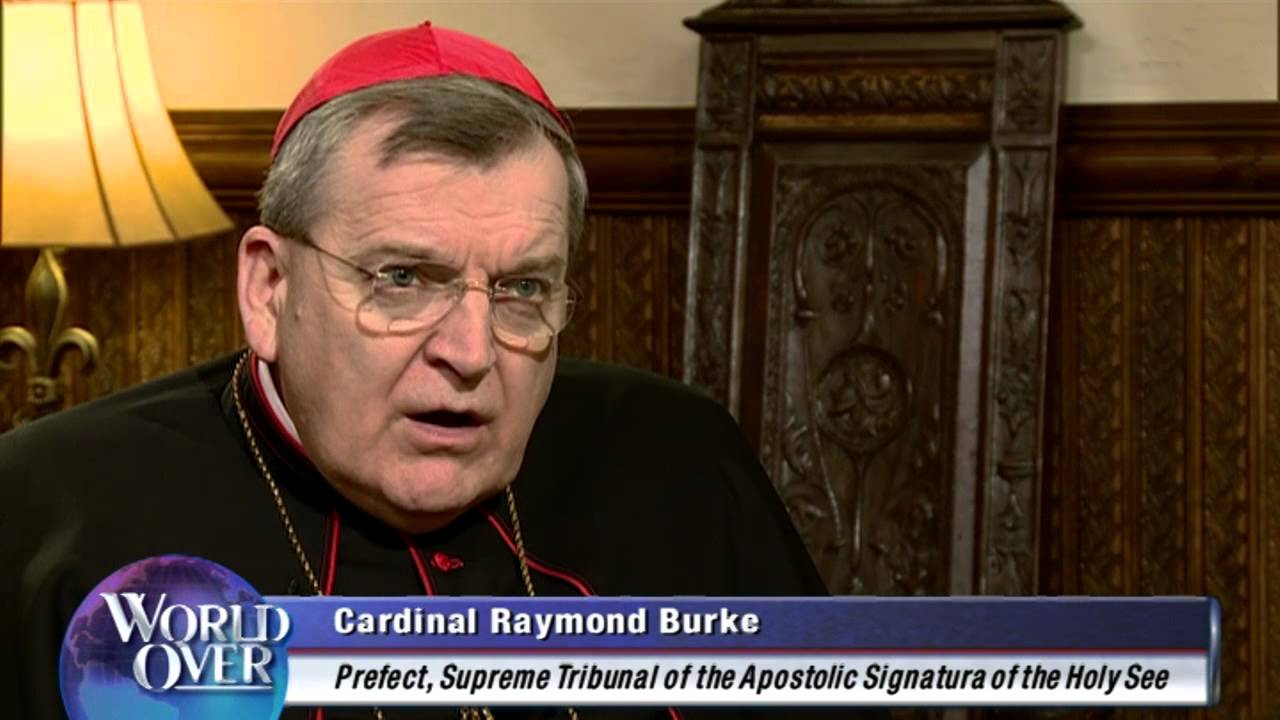 There are too many important passages in Raymond Cdl. Burke’s recent 29 minute interview with EWTN to quote and comment upon here. The entire interview should be seen by those wanting to understand better what is happening in and around the Extraordinary Synod on the Family. Even so, a few parts warrant underscoring.

At approx. 11:45, Burke talks about helping couples in irregular unions (Catholics civilly remarried after divorce) to “lead a chaste life”. Burke is referring to the brother-sister relationship long recognized by moralists and canonists as a viable way for such couples to stay together (say, for the sake of children), cease taking for themselves the prerogatives of the married, and access holy Communion.

At approx. 12:45, I wish Burke had been allowed to respond to Cdl. Kasper’s astounding claim that sacramental Confession is possible for someone who does not express firm purpose of amendment. Instead the discussion went down another interesting path. Oh well.

At approx. 15:58, Burke rejects with the bluntness it deserved Kasper’s claim that the annulment process itself is nothing more than Catholic divorce. The 1944 address of Pius XII mentioned by Burke is available in English at Canon Law Digest III: 612-622 or in Italian here.

At approx. 17:08, Burke makes a subtle but vital point that is of divine law that the Church have a process for assessing (among other things) the validity of marriage. It must be understood that, whatever else it is, marriage is, by Christ’s decision, a relationship rooted in contract (though this contract is raised to the level of sacrament between the baptized, c. 1055) and therefore the ecclesial society needs a legal process to assess the binding character of those contracts apparently entered into by its members. While the Church can, and does, make use of both judicial and administrative procedures to attain justice (annulment cases being among those matters treated judicially, c. 1671), the notion of hearing marriage nullity cases “administratively” has become code for deciding such cases “pastorally” or “mercifully” or in some way or another that is not “legal” in nature. Burke’s comment is an urgent call not to abandon the idea that some legal process be employed to satisfy certain aspects of divine law.

At approx. 18:50, Burke makes an important observation on the “complexity” of the annulment process, namely, that the process is, for the most part, only as a complex as are the situations that the process is meant to assess. If life (including its legal aspects) were simple, then living life (and settling its legal questions) would also be simple. He makes the same point at approx. 19:30, calling for more people to be trained in canon law.

At approx. 21:10, Burke concedes the oddity of the pope’s naming a commission to revise tribunal procedures before it was even settled that tribunal procedures needed to be revised, let alone agreed in regard to the manner in which they should be revised. For my part I too was surprised to learn that such a commission had been appointed so quickly, and then struck by, among other things, how few of the members seem to have extensive first instance experience or come from nations wherein tribunals function on significant scales.

At approx. 21:20, Burke says he would make very few and very small changes to the current annulment process. “Very few” because, as I and others have argued, the tribunal process already is a bare-bones legal process, that is, almost nothing that tribunals do is not directly required by natural law for the achievement of justice. Things like citation of parties, use of witnesses, settled grounds for investigation, moral certitude of decision, and so on—to eliminate any of these aspects of an annulment case would be to deprive the process of something required by natural law itself for justice. “Very small” because Burke strongly supports, among other things, maintaining mandatory second instance review of affirmative sentences (c. 1682). Now, this is one of the few points on which reasonable Catholic minds can differ with Burke (and still make sense while doing so).

All informed discussants recognize that mandatory review of trial court sentences is not required by divine law for the attainment of justice, so in that regard it is a matter left to human genius for decision. Precisely because it is a matter for human determination, I am comfortable leaving the continuation or abandonment of mandatory second instance to the wisdom of ecclesiastical authority. Personally, I prefer its abrogation—but I grant that my experience in tribunal work colors my view: I served in tribunals where qualified first instance judges took their duties seriously and (I’d like to think as a result thereof) second instance courts rarely failed to ratify first instance decisions. Too, perhaps one incentive to the good work being done in first instance is knowing that second instance is going to examine it. Removing mandatory review is a risky way to test that hypothesis.

In any event, Burke in his office regularly sees tribunal cases from around the world: he might therefore appreciate second instance as being a much more important practical, if admittedly optional, check on faulty first instance processes or decisions and, as a prudential matter, favor retention of second instance on those grounds. If that’s the case, well, let’s just say that Burke’s prudential judgment on such things is worth considerably more than mine.

At approx. 22:30, I wish the discussion on the “nature of the Synod” had turned first to the incredibly bad ecclesiology that allows such nonsense as “Synod 2014 is like a new Vatican Council II” even to be uttered. How does such nonsense get said at all? Compare Canons 336-341 on ecumenical councils (subjects of “supreme and full power over the universal Church”) with Canons 342-348 on synod (groups of bishops that foster unity and advise). Good grief.

At approx. 26:20, Burke makes the kind of comment that resonates with every good lawyer: when asked how he felt about being removed from the Congregation of Bishops, Burke replies that No one has a right to be on such a body. Brilliant, go right to the heart of the law (cc. 331, 360-361, and ap. con. Pastor bonus) and defend the pope’s authority over his own dicastery. Whether Burke’s is a voice that Pope Francis wants to hear is entirely the pope’s call to make. Opinions may differ on the wisdom of such a removal, but it is not for this group or that, for the media, or for any one else to impose their preferences in such matters on the pope.

I am a retired Roman Catholic Bishop, Bishop Emeritus of Corpus Christi, Texas
View all posts by abyssum →
This entry was posted in Uncategorized and tagged Dr. Edward Peters, RAYMOND ARROYO, RAYMOND CARDINAL BURKE, THE WORLD OVER/EWTN. Bookmark the permalink.
%d bloggers like this: