THE THIRD WEEK OF OCTOBER, 2014 WILL GO DOWN IN HISTORY AS IMPORTANT

October 20, 2014, Monday — Light from the East
The leadership of the Roman Catholic Church has just spent two weeks considering fundamental questions about the nature and purpose of marriage and the family.

These two weeks are only the beginning of a conversation which will continue for another year, until October 2015, when another Synod will be held on the same topic to take decisions.

So there will be a year to reflect on what has been said in these days, and on what is being said in the months ahead, leading up to the “Family Synod: Part 2.”

In a preliminary way, however, we may say that this Synod truly was a watershed.

It marked the moment when the debate in Western culture over gender identity, sexuality, marriage, divorce, procreation and child-rearing “washed over” into the deliberations of the Church at the highest level.

In the West, post-Christian elites — and many increasingly secularized Christian denominations — have, for half a century or more, been seeking to revise, even revolutionize, society’s understanding of human nature, human behavior and human rights in ways departing from traditional roles — roles such as “father,” “mother,” “son,” and “daughter” — questioning each of these roles (replacing “father” and “mother,” for example, with “Partner #1” and “Partner #2,” as has occurred in France).

Strikingly, during the past two weeks, the African bishops were the most outspoken against a departure from the “traditional” line. Chief among them was Cardinal Wilfrid Napier, 73, of Durban, South Africa.

But if there was a “reservoir of traditionalism” in regard to morals in the African hierarchy, there was also such a reservoir in Eastern Europe, especially Poland.

In this sense, it may be said that there was in the Synod a “light” coming from the East — an East which until 25 years ago was officially atheist and unrelentingly radical its vision of a “new Soviet man” whose identity was rooted in his economic class, freed from the “shackles” of traditional family models.

Archbishop Stanislaw Gądecki (photo), head of the Polish bishops’ conference, was one such “voice from the East.” 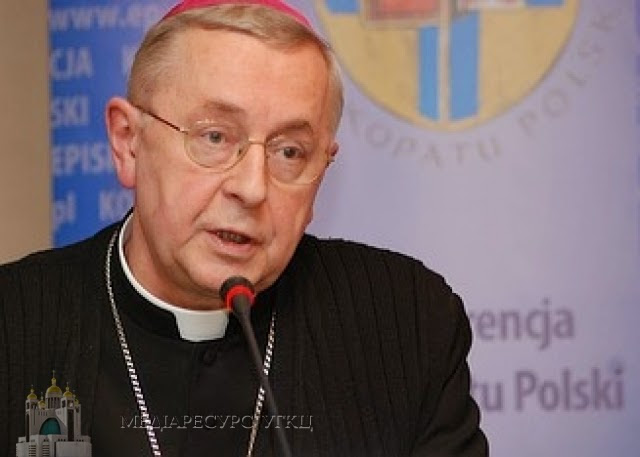 “Had I not spoken up, the Synod might have ended up worse,” Gądecki said yesterday on Polish state radio, as reported today by Polish journalist Marek Lehnert, writing for the Vatican Insider website.

Gądecki, along with other bishops, criticized last Monday’s relatio post disceptationem (“report after debate”) as going away from the teaching of Pope John Paul II and “strongly ideologized, because it considered more the sociological than the theological side.”

“I am under the impression that, had I had not spoken up, things might have ended up even worse,” Gądecki said. “I consider that there was a need to say something, because of the calls rising up from families, they were terrified. Something had to be said, so as not to confirm to people the certainty that we were about to abandon the doctrine of the Church. Because everything had to have a more serious format, more detailed and analyzed.”

“Thankfully,” the Polish prelate added, “the circuli minores carried out a very serious work, considering word by word, and that which ended up in the third text is much more serious, thank God.”

Gądecki added: “The impression cannot be given that for two millennia there had been no mercy in the Church, that mercy now shows up unexpectedly. Mercy makes sense if it is related to truth.”

But there was also another, and generally overlooked, “voice from the East” at — or near — the Synod, this time from Russia.

From Russia with Faith

On October 18, Russian Orthodox Metropolitan Hilarion of Volokolamsk, 48 (in the photo below with Pope Francis), chairman of his Church’s Department for External Church Relations, met with Francis for about one hour — a rather long meeting given the circumstances (the ongoing Synod).

Their conversation was reported on by the website of the Moscow Patriarchate in these terms, which gives special emphasis to the desire of the Orthodox to collaborate with the Catholics in many areas, especially in the Middle East: 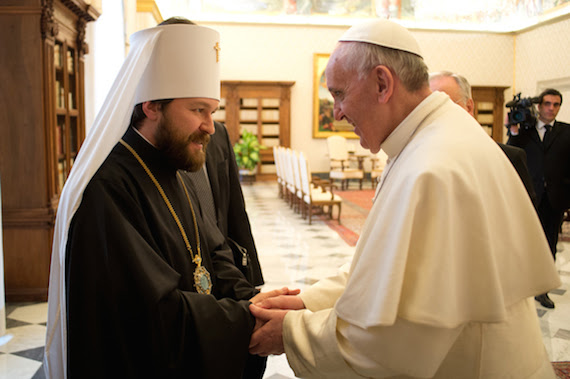 (2) Much attention was paid to the dramatic situation in Ukraine where the conflict lasting for a year has claimed thousands of human lives.

(4) Also, consideration was given to various aspects of the Orthodox-Catholic cooperation. Metropolitan Hilarion recounted the results of the 13th plenary session of the Joint Commission for Theological Dialogue between the Orthodox and the Roman Catholic Churches held in Amman, Jordan, in September. He underscored that consideration of the correlation between synodality and primacy on the local, regional and universal levels of the church governing must be based on the sources rather than on theological speculations.

(5) Metropolitan Hilarion shared with Pope Francis his impressions of participation in the plenary session of the Synod of Catholic Bishops, noting the topicality of thorough discussion of the institution of the family and the necessity of defending traditional family values. The importance of cooperation in this area between the Orthodox and Catholic Churches was underscored.

A Talk in Naples

But more remarkable than all of this was a talk Hilarion gave in Naples the previous day, October 17.

He came to Naples at the invitation of Crescenzio Cardinal Sepe, Archbishop of Naples, in order to take part in the opening of the academic year at the Pontifical Theological Faculty of Southern Italy.

The talk is quite long, but  merits a read-through.

Hilarion sets forth a powerful vision of the relationship between Christianity and secular authority.

In this vision, Christian faith can influence and inform the secular regime, but never “merge” into it.

This is a proclamation of the valuable role the faith can play in any society, but also a rejection of the accusation often made against the Orthodox, that the Church “merged into” the State, becoming servile to it.

This is not true, he asserts. He makes this proclamation explicit at the end of his talk, saying: “And no matter what researchers say about Church-state relations in Byzantium and Rus, at her very heart the Church has remained free, irrespective of the external political circumstance.”

Indeed, for Hilarion, the key characteristic of the Christian Church is her freedom.

And this seems an important point to keep in mind in a time of political correctness, when political regimes seem to be demanding that the Church accept changes in her doctrinal formulations or suffer persecution.

“A Reverential Attitude towards Freedom”

Hilarion spends some time on the transition from the pagan to the Christian era.

“Contrary to widespread opinion,” Hilarion writes, “Christianity did not simply become a substitute for the decayed paganism of the Roman Empire; it entered its life and structure as something principally new. It was not subject to the dictatorship of secular authority, it influenced this very authority, at times embarking upon an unequal conflict with it.”

“We Christians,” Hilarion adds, “believe that the gift of life is a gift from God, and that human life is not under the power of anyone other than the Maker of the human race.

“This belief renders Christians free from the oppression of any political power and any ideology.

“No other religion or ideology characterizes such a reverential attitude towards freedom. [emphasis added]

“The great Russian philosopher Nikolai Berdyaev said that ‘freedom, above all freedom, is the soul of Christian philosophy and this is what cannot be granted by any other abstract and rationalistic philosophy’.[xi]”

So Hilarion presents the Christian faith as a support for the deepest aspirations of human freedom against oppressive state power.

Strikingly, he sees that oppressive state power at work in the West today, rooted in a false conception of freedom.

“In recent times,” Hilarion writes, “we have more often been able to observe how in the West another type of freedom has been proclaimed: freedom from moral principles, from common human values, from responsibility for one’s actions. We see how this freedom is destructive and aggressive. Instead of respect for the feelings of other people, it preaches an all-is-permitted attitude, ignoring the beliefs and values of the majority. Instead of a genuine affirmation of freedom it asserts the principle of unrestrained gratification of human passions and vices remote from moral orientation.”

He goes so far as to say: “The modern-day democratic state is even viewed by some as the role of guarantor of the legal status of immorality, for it protects citizens from the encroachments of ‘religious sanctimoniousness’.”

Russia has begun a spiritual conversion

What is perhaps most remarkable about this essay is its depiction of the conversion that has taken place in Russia — a turning away from one system of life (the communist one) to embrace a different, new one — the Christian one.

Some will deny that this has actually occurred. They will say that the return to faith is Russia is superficial and state-sponsored. But Hilarion disagrees.

Hilarion traces the beginning of an authentic “conversion of Russia” to the celebrations in 1988 of the 1,000th anniversary of the baptism of “the Rus” (the Russian people collectively).

“From that moment (the year 1988) on,” Hilarion writes, “there began an unprecedented in its scale revival of the Church throughout the expanse of the former Soviet Union. At the beginning of the 1990s the number of those wanting to be baptized was such that a typical priest in a typical city or village church could baptize in the course of one day hundreds of people. Everywhere churches were restored and opened.

“Throughout the last 26 years in the Russian Church there have been restored from ruins or opened anew more than 26,000 churches: this means that we have opened and continue to open a thousand churches a year or three churches every day. There have been opened more than 800 monasteries, which have been filled with young monks and nuns.

“In the large cities, Church secondary schools and church institutes of further education have appeared. Theological faculties have been opened in secular universities. The Church has assumed the direction of her activities which in the period of persecution were in effect banned: publications, social ministry and charity work.

“And all of this has taken place in the very same era which in the West some call post-Christian.”

And he adds: “In our time the Church and her sacred Tradition have become a revelation for our nation. A whole generation of people torn from the Church has again discovered faith.”

And so, as the Catholic bishops debated, a Russian Orthodox bishop, speaking in Italy, is telling us that Russia has begun her conversion, and is seeking in the West for partners in confronting the misery and sorrow that is a life and a culture without faith.

“I would like to wish you all, and in your person the future generation of Western Christians,” Hilarion ends, “to preserve the spirit of the Christian freedom which considers as vanity all that which does not incline its head before the living God and the Saviour of the world, Jesus Christ… For God calls us to be his co-workers in this world…”

That such words are spoken by a Russian after the long night of communism, can only cause an American, a westerner, to wonder…

2 Responses to THE THIRD WEEK OF OCTOBER, 2014 WILL GO DOWN IN HISTORY AS IMPORTANT