THE SMELL OF SCHISM IS IN THE AIR 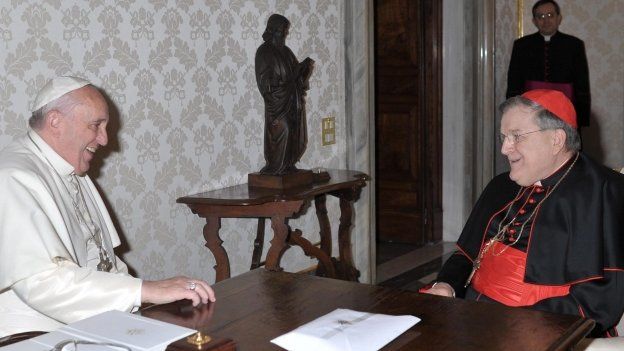 The Dangerous Road of Papal Silence

The letter of the four Cardinals to Pope Francis, and the decision to go public with this document certainly constitute a stunning affair in the history of the Church. When has anything like this ever taken place? There’s the sad history of Ignaz Von Dollinger, which eventually led to his excommunication, but Dollinger was simply a priest-historian, and no Cardinals ever joined his challenge to Vatican I’s solemn teaching on papal infallibility.

This present event is a dramatic challenge to Pope Francis who, ironically, has several times called for a shaking up of the Church. The Cardinals are all well respected and strong supporters of the papal primacy and the papal office of teaching. Their letter to the Congregation for the Doctrine of the Faith is a sincere effort to gain some clarity on positions advanced in Amoris Laetitia. For their troubles, the head of the Roman Rota has openly threatened them with the loss of their status as Cardinals.

It’s worth noting that only one of the five questions posed for clarification by the Cardinals had to do with admitting divorced and civilly remarried Catholics to the Eucharist. In a way, the other four questions point to even more significant problems relating to the existence of intrinsically evil acts, the objective situation of grave habitual sin, and the critically important formation of an objectively true conscience.

The five dubia were very carefully and succinctly written and followed the traditional method of presentation of such questions to the Holy See. They ask the pope to explain how certain statements in Amoris Laetitia were to be understood in the light of the authoritative teachings of his predecessor Pope John Paul II as found in Familiaris Consortio 84 (reaffirmed in Reconciliatio et Paenitentia 34, and Sacramentum Caritatis, 29 (dubium 1); Veritatis Splendor 79 (dubium 2); (Pontifical Council for Legislative Texts (dubium 3); Veritatis Splendor 81 (dubium 4); Veritatis Splendor 56 (dubium 5). These texts are foundational for the Church’s teaching on moral principles, for an upright confessional practice, and for sacramental discipline.

The letter’s authors insist that their only intention is to remove the confusion: “theologians and scholars have proposed interpretations that are not only divergent, but also conflicting. . .thereby provoking uncertainty, confusion and disorientation among many of the faithful.”

Cardinal Burke, in an interview with the National Catholic Register, stated that they chose to go public only after they learned that the pope had decided not to respond, which decision is a stunning response from the Chair of Peter. One might almost call it reckless, given the very real potential for dividing the Church. Indeed, Cardinal Burke addressed this possibility in the interview when he stated that the letter “has also been undertaken with the greatest respect for the Petrine Office, because if the Petrine Office does not uphold these fundamental principles of doctrine and discipline, then, practically speaking, division has entered into the Church, which is contrary to our very nature.”

Pope Francis already had an agenda for “reshaping” the Church in certain areas of discipline when he came into office, as seems clear from the speed with which he announced the Synod on the Family. It was a perplexing event. His predecessor, Saint John Paul II, had convoked a Synod on the same topic and had issued a brilliant exhortation, Familiaris Consortio.

It was even more telling that little in the preparatory documents, or in the exhortation following the Synod, seemed to have much reference to that earlier exhortation. In retrospect, that Francis had it in mind to alter certain determinations of that earlier Synod and John Paul II’s exhortation appears all but certain.

Now, it is not only Catholic scholars like the eminent philosopher Robert Spaemann who in 2015 recognized that “This pope is one of the most autocratic [popes] that we have had in a long time.” In a recent Reuters article, “Pope Francis the manager – surprising, secretive, shrewd,” Philip Puella argues that Pope Francis, whom he admires and strongly supports, is more like an autocrat than a typical, saintly pontiff. For instance, Puella says “Francis likes to break rules and then change them once the shock has died down.” And that “after he was elected, he appointed trusted people to lower or mid-level positions in Vatican departments, where they can be his eyes and ears.”

Looking back, the pope’s invitation to Cardinal Kasper to speak to the bishops months before the first Synod on the Family seems almost certainly now to have been a bit of management. The pope was behind the proposed change from the beginning and was determined to provide access to the sacraments by the divorced and remarried, even if the Synod Fathers did not support it – which they didn’t.

Pope Francis certainly had no mandate from the Synod Fathers to make such a drastic alteration in the Church’s sacramental discipline. Quite the opposite, which should have suggested he would be entering dangerous waters should he choose to do so. But he did, nonetheless, and has since tried to portray his critics as fundamentalist, legalistic, and rigid Catholics, who are troubled and are troubling the Church.

The upshot of all this, as Australian Cardinal George Pell remarked in a lecture in London earlier this week, is that “a number of regularly worshiping Catholics” are “unnerved by the turn of events.” More seriously, there is now widespread confusion about the role of conscience in Catholic moral thought.  {This is really the heart of the problem.  Pope Francis seems to be rejecting the most important of all the important Encyclicals of Saint Pope John Paul II, VERITATIS SPLENDOR.  In that Encyclical Saint John Paul II effectively demolished one of the most dangerous errors that had come to dominate much of moral thinking in western thought: proportionalism/consequentionism.  The philosophical/theological errors of proportionalism/consequentionism provide the rationale for the push by the Kasperites to make the giving Holy Communion to those who are divorced and living in civil marriages legitimate.  The basis of that error lies in the rejection of the existence of intrinsic evil.  A shocking example of an intrinsic evil act is the killing of an innocent child in a partial-birth abortion.  Pope Francis’ criticism pro-life Catholics is perhaps a consequence of his seeming rejection of Veritatis Splendor with its clear magisterial teaching about intrinsic evil.  The heresy of Pope Francis’ ally in the ‘reform’ of the Church, Cardinal Walter Kasper, is that, as he has written, the essential attribute of the nature of the God is “mercy” not love. The teaching of Jesus is clear in the Gospels:  mercy is preceded by judgment.  Jesus did not say “Who am I to judge!” on the contrary he proclaimed  judgment as being an essential attribute of the Kingdom of God.}

Well, now four cautious and conscientious churchmen have openly sought a solution to all this turmoil. Cardinal Burke suggested what might follow if the pope remains silent:  “There is, in the Tradition of the Church, the practice of correction of the Roman Pontiff. It is something that is clearly quite rare. But if there is no response to these questions, then I would say that it would be a question of taking a formal act of correction of a serious error.”

This really would be quite awful, forcing Church leaders, priests, and lay people into taking sides – a kind of practical schism. Let’s pray it never comes to this. But to avoid such divisions and worse, Pope Francis will now have to do something.

Fr. Mark A. Pilon, a priest of the Diocese of Arlington, Virginia, received a Doctorate in Sacred Theology from Santa Croce University in Rome. He is a former Chair of Systematic Theology at Mount St. Mary Seminary, a former contributing editor of Triumph magazine, and a retired and visiting professor at the Notre Dame Graduate School of Christendom College. He writes regularly at littlemoretracts.wordpress.com.

4 Responses to THE SMELL OF SCHISM IS IN THE AIR