“THE HORROR, THE HORROR” A CELEBRATION OF APOSTASY, MARTIN SCORSESE’S NEW FILM: SILENCE 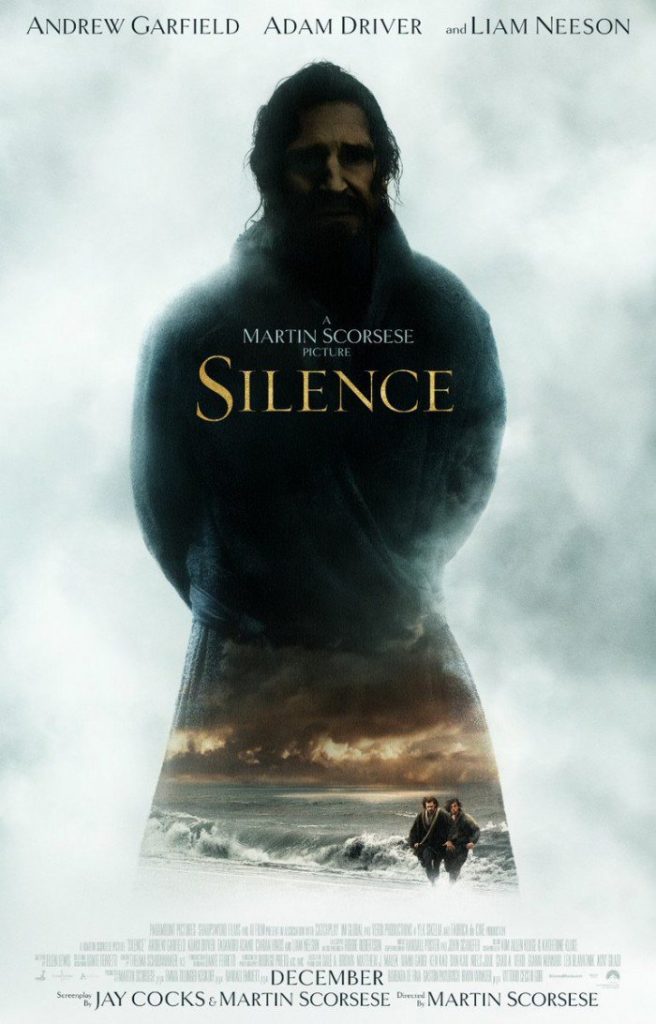 [ EMPHASIS AND {COMMENTARY} IN RED TYPE BY ABYSSUM ]

When St. Francis Xavier, S.J. brought Catholicism to Japan in 1549, conversions were hard to come by. Xavier struggled to learn Japanese, and initially relied on imagery, usually illustrations of Christ, Mary, and the saints to tell the Christian story. He died just three years into his mission.

Yet hundreds of thousands did convert, and the Japanese Church flourished for more than a generation, until the persecutions began. In 1597, twenty-six Christians were crucified in Nagasaki. {I have always considered it to have been the work of Satan that the Generals in the Pentagon (who were themselves perhaps members of the Masonic order and enemies of the Church) that they chose the most Catholic city in Japan, Nagasaki, as the target for the dropping of the second atomic bomb on Japan.  They could have chosen one of the heavily industrialized cities of Japan as the target, instead they chose Nagasaki which had no real military value to Japan.  In the same way General Mark Clark ordered the destruction of Saint Benedict’s ancient monastery in Italy, Monte Cassino, even though it had no military significance other than being used as a place for artillery spotters.}  Then beginning in the following year and continuing into the 1630s, another 205 were martyred throughout the country. And by the time the two Portuguese priest-heroes of Shūsaku Endō’s 1966 novel, Silence, came to Japan in 1639, an additional 206 had been killed for being Kirishitan.

What Japanese authorities had taken to be a curious adjunct of trade with Western nations was now considered a lethal threat to the nation’s cultural patrimony. Missionary work was dangerous, and those fictional priests, based on real missionaries, fully expected to die for Jesus.

But Endō’s book (and Martin Scorsese’s new film version of it) isn’t about martyrdom; it’s about avoiding it. Above all, the authorities want apostasy (sincere or not), and most of the main characters apostatize.

The word {apostasy} itself in its etymological sense, signifies the desertion of a post, the giving up of a state of life; he who voluntarily embraces a definite state of life cannot leave it, therefore, without becoming an apostate. Most authors, however, distinguish with Benedict XIV (De Synodo di£cesanâ, XIII, xi, 9), between three kinds of apostasy: apostasy a Fide or perfidi£, when a Christian gives up his faith; apostasy ab ordine, when a cleric  {priest} abandons the ecclesiastical state; apostasy a religione, or monachatus, when a religious leaves the religious life.  – Advent New Encyclopedia

Now it’s easy at the distance of half a millennium to look with disdain upon a priest who knows the risks and yet abandons the profession of faith to which his ordination bound him. Scorsese seems to ask: What would you do when asked to trample on a sacred image of Jesus, if doing so would save the lives of others? Kirishitans are hanging upside down in a pit, small incisions in their necks, slowly bleeding to death, and only you can save them. All you have to do is stamp your foot on a fumi-e – a sort of demonic icon depicting Christ. What would you do?

Well, those hundreds of real Japanese martyrs, saints one and all, perished because they refused to apostatize – because they believed their lives, though ending in agony, were redeemed by Christ. Eternal joy awaited them.

Endō was a Catholic convert, and it’s fair to wonder how complete his conversion was. Martin Scorsese is a cradle Catholic who, despite meeting with Pope Francis during promotion of his movie (which premiered on December 23rd), shows no signs of being a faithful Catholic.

The book is very much a retelling of Joseph Conrad’s anti-colonial novel, Heart of Darkness (1899), the tale of a man named Marlow who travels up the Congo in search of an ivory trader named Kurtz, described as “an emissary of pity, and science, and progress,” but who has become a god to the “natives.” Conrad’s book was also the basis of Francis Ford Coppola’s 1979 Apocalypse Now, in which a spec-ops officer goes up the Mekong in search of a rogue colonel, also Kurtz, now a godlike figure for the Montagnards. Both Kurtzes die uttering the famous line: “The horror! The horror!”

What does this have to do with Scorsese’s Silence? The two Jesuit priests, Sebastião Rodrigues (Andrew Garfield) and Francisco Garrpe (Adam Driver), have come to Japan to find Father Cristóvão Ferreira (Liam Neeson), who is said to have gone native, even to the point of apostatizing and marrying.

When Endō read Heart of Darkness, he must have been impressed by the fictional organization with which Kurtz corresponds, the International Society for the Suppression of Savage Customs, because that is surely a part of what missionary activity everywhere has amounted to – in the minds of the “natives” anyhow – and it’s likely Endō loved Christ but wasn’t particularly fond of Christians {surely that is contradictory, but, given the labyrinth of the human mind, it is possible}.

When Marlow/Rodrigues/Garfield finally confronts Kurtz/Ferreira/Neeson, it is the older man, formerly Rodrigues’ teacher back in Portugal, who secures the younger man’s apostasy.

Scorsese’s film is actually the second adaptation of Endō’s book, the first being Masahiro Shinoda’s 1971 Chinmoku (“Silence” in Japanese). Two American actors portrayed the Portuguese priests, but with a difference: both were able to speak most of their lines in Japanese, whereas Mr. Garfield manages, towards the end of Scorsese’s film, just a few words in that language. Perhaps the most remarkable thing about the earlier film is the casting of Tetsurō Tamba (who played Tiger Tanaka in the Bond film You Only Live Twice) as Ferreira. As if to say: here’s a Portuguese Jesuit who has really gone native!

Shinoda’s film runs a manageable two hours; Scorsese’s is nearly three, and it’s because of repetitiveness, not because there was more to tell of Silence than Shinoda did.

As the book reaches its climax, Rodrigues feels the sand giving way beneath him:

“From the deepest core of my being yet another voice made itself heard in a whisper. Supposing God does not exist. . . .

This was a frightening fancy. . . .What an absurd drama become the lives of [the martyrs] Mokichi and Ichizo, bound to the stake and washed by the waves. And the missionaries who spent three years crossing the sea to arrive at this country – what an illusion was theirs. Myself, too, wandering here over the desolate mountains – what an absurd situation!”

{BEWARE:  DO NOT TAKE YOU CHILDREN TO SEE THIS FILM, IT MAY HAVE A CORROSIVE EFFECT ON THEIR FAITH}  Scorsese’s Silence is not a Christian film by a Catholic filmmaker, but a justification of faithlessness: apostasy becomes an act of Christian charity when it saves lives, just as martyrdom becomes almost satanic when it increases persecution. “Christ would have apostatized for the sake of love,” Ferreira tells Rodrigues, and, obviously, Scorsese agrees.

{THAT IS A BLASPHEMOUS THING FOR THE SCRIPTWTRITER TO HAVE THE CHARACTER FERREIRA (LIAM NEESON) SAY.}

Silence is rated R for its multiple scenes of torture. The Americans and Brits {actors} mostly have the movie stolen from them by a superb Japanese cast, including: Yôsuke Kubozuka as Kichijiro, a Judas who earns a lot more silver than the original one; Issei Ogata as the missionaries’ principal antagonist, the inquisitor Inoue; Shin’ya Tsukamoto (Mokichi) and the great Yoshi Oida (Ichizo) as Catholic villagers martyred by the inquisitor. I won’t be surprised if either Mr. Oida or Mr. Kubozuka receives an Oscar nomination as a supporting actor. If so, that will likely be the film’s only nod from the Academy.

© 2016 The Catholic Thing. All rights reserved. For reprint rights, write to: info@frinstitute.orgThe Catholic Thing is a forum for intelligent Catholic commentary. Opinions expressed by writers are solely their own.

Brad Miner is senior editor of The Catholic Thing, senior fellow of the Faith & Reason Institute, and a board member of Aid to the Church In Need USA. He is a former Literary Editor of National Review. His new book, Sons of St. Patrick, written with George J. Marlin, will be published on St. Patrick’s Day. The Compleat Gentleman, is available on audio and as an iPhone app.

30/11/2016 14:34
(Vatican Radio) Pope Francis on Wednesday met the Italo-American movie director Martin Scorsese whose latest film “Silence” recounts the persecution of a group of Jesuit missionaries in 17th century Japan. Scorsese was accompanied at the audience in the Vatican by his wife, his two daughters, the producer of the “Silence” film and the Prefect of the Secretariat for Communications Monsignor Dario Viganò.  A Vatican statement said the meeting was very cordial and lasted 15 minutes.Pope Francis told those present that he had read the novel on which the film “Silence” was based, written by the late Japanese author Shusaku Endo.

Scorsese gave the Pope two paintings on the theme of “hidden Christians,” one of them a much-venerated image of the Madonna painted by a 17th century Japanese artist. Pope Francis gave his guests rosaries.

The audience in the Vatican came after a special screening of “Silence” in Rome on Tuesday night for more than 300 Jesuit priests. The movie is due to premiere in the United States this December.

{It would be interesting to learn what Francis thought about the Shusaku Endo’s novel.  Francis has spoken publicly about his disdain for proselytizing.  Unfortunately in the context of his remarks about proselytizing Francis seemed to be condemning all missionary activity by the Church.  That is more than passing strange since the Society of Jesus, to which Francis belongs, was responsible for the Christianizing of Japan and India and China and has many of it members, like Saint Francis Xavier, in the company of canonized saints.  His trip to Lund, Sweden to celebrate the 500th Anniversary of the Protestant Reformation was characterized by remarks he made which seem to denounce Catholic efforts to convert Protestants to the Catholic Faith.}

5 Responses to “THE HORROR, THE HORROR” A CELEBRATION OF APOSTASY, MARTIN SCORSESE’S NEW FILM: SILENCE