Posted on October 30, 2017 by abyssum
When a Prince of the Holy Roman Catholic Church celebrates the Arch-heretic Luther and the countless loss of souls to the so-called Reformation – then the Great Apostasy is here.
[…]
This Saturday, October 28, 2017 at 16h, took place in the [Roman Catholic] Cathedral Saints-Michel – & – Gudule
a Protestant ceremony in commemoration of the 500th anniversary of the Reformation.
The preaching was done by [United Protestant Church of Belgium /President] Pastor Steven Fuite.

Cardinal Jozef De Kesel, Archbishop of Mechelen-Brussels, participated in this ceremony with other religious leaders and laity.

This initiative was not to everyone’s taste. A group of young Catholics disrupted the ceremony by reciting the Rosary [in reparation] , preventing Pastor Steven Fuite from beginning his preaching.

That lasted 40 minutes: it was only after the intervention of the police and the expulsion of the young people, that the ceremony could continue. 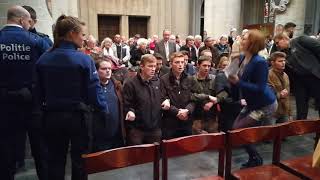