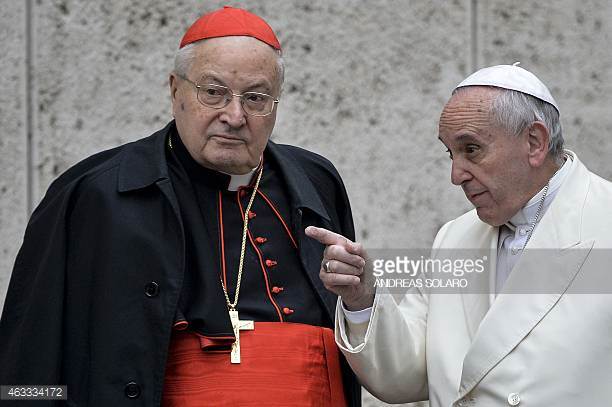 Cardinal Angelo Sodano on the left with friend on the right

The Pope and the Vatican’s top power broker

For the first time in my life, I find myself in substantial agreement with Robert Mickens, who now covers Vatican affairs for La Croix. In his most recent column there, Mickens examines the enormous and enduring influence of Cardinal Angelo Sodano. It’s an eye-opener.

Cardinal Sodano retired as Vatican Secretary of State in September 2006. But he did not leave office willingly—in fact, he literally stayed, physically, at the same desk for weeks, forcing his successor Cardinal Tarcisio Bertone, to work out of a temporary office—and he has continued to play his accustomed role behind the scenes, promoting the interests of various prelates and various causes. He remains the dean of the College of Cardinals today, at the age of 90, with no sign that he is prepared to step down from that position.

After nearly half a century of work in the Secretariat of State, Cardinal Sodano was reportedly not pleased with the selection of Cardinal Bertone, a non-diplomat, as his successor. In fact, according to Mickens, with that appointment “Benedict inflicted a slow-bleeding and mortal wound to his own pontificate by rebuffing Cardinal Sodano.” From that point forward, the “old guard” of the Vatican bureaucracy, led by the many officials who owed their rank to Cardinal Sodano, ceased to support Pope Benedict. And it showed, in the various public gaffes, petty quarrels, and internal scandals that troubled the last few years of Benedict’s pontificate.

(Actually I would argue that the tension between Pope Benedict and Cardinal Sodano was evident earlier, almost from the start of the pontificate, when Benedict ordered a full-scale investigation of abuse charges against Father Marcial Maciel, the founder of the Legion of Christ, who up until that time had enjoyed Cardinal Sodano’s protection and escaped from serious inquiry. The investigation, which revealed that Maciel had been leading a double life, was led by then-Msgr. Charles Scicluna.)

In any case, when Pope Benedict resigned, Cardinal Sodano, in his role as dean, organized the meetings of cardinals before the conclave. Mickens believes that he used his considerable influence to encourage votes for Cardinal Bergoglio, and although I have no way of knowing whether that is true, it would be difficult to imagine that the Italian cardinal missed any opportunity to exercise his influence. So was Cardinal Bergoglio his favored candidate? And if so, why?

Here too Mickens provides some useful background, much of it already well known. Cardinal Sodano had spent years in Latin America as a Vatican diplomat. He was well acquainted with the bishops of the region. He would have known Cardinal Bergoglio better than most other Vatican officials.

More to the point, Cardinal Sodano spent more than a decade in Chile as apostolic nuncio, helping to select that country’s bishops. So he knows—or at least certainly shouldknow—which prelates and priests would have a reliable perspective on the current controversy surrounding Bishop Juan Barros. Mickens believes that Cardinal Sodano defended Bishop Barros, because the cardinal “has a long history of protecting ‘the interests of the church’—as institution, that is.” Again I cannot confirm that theory, but I cannot deny that it is plausible.

But now Pope Francis is facing heavy criticism for defending Bishop Barros. And significantly, to investigate the furor he assigned now-Archbishop Scicluna: the same prelate whose probe into the Maciel case revealed the limits of Cardinal Sodano’s influence. At the Vatican today, Mickens writes, Cardinal Sodano “is becoming less and less a force to be reckoned with.”

Cardinal Sodano has been a skillful behind-the-scenes player at the Vatican. If indeed his power is finally fading—and if, as Mickens seems to suggest, Pope Francis is prepared to declare his independence of the consummate Vatican power broker—whose star is on the rise?

Phil Lawler has been a Catholic journalist for more than 30 years. He has edited several Catholic magazines and written eight books. Founder of Catholic World News, he is the news director and lead analyst at CatholicCulture.org. See full bio.

{I am surprised the Phil Lawler did not mention in this article that Cardinal Angelo Sodano is under investigation by Italian justice officials because he sought and received (probably with the help of Francis) an improper ‘loan’ of $400,000 from the Bambino Children’s Hospital in Rome with which to REMODEL HIS APARTMENT.

As Dean of the College of Cardinals, Cardinal Sodano has the responsibility of calling the next Conclave in session and presiding over it in the event that Francis dies, resigns, or otherwise leaves office.}

2 Responses to KEEP YOUR EYE ON CARDINAL ANGELO SODANO