MUCH HAS BEEN WRITTEN ABOUT BENEDICT’S RESIGNATION AND FRANCIS’ ‘ELECTION’. HERE IS THE BEST ANALYSIS I HAVE READ UP TO NOW 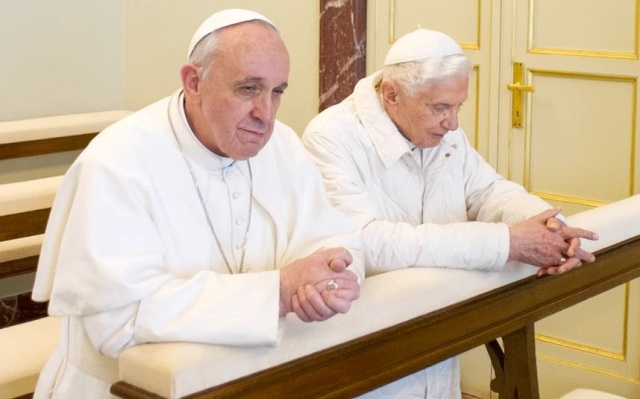 Pope Benedict XVI did not renounce the munus petrinum; and therefore, the question is, who is the true pope, Francis or Benedict? I have systematically analyzed (as did far more systematically and thoroughly, Canon Law Professor Fr. Stefano Violi) Benedict’s own words, in which he very carefully states his intention to renounce only the petrine ministry, but NOT the petrine munus. Benedict stated explicitly that he received his committment to serve (i.e. the munus) on 19 April 2005, which he said was “for always” and added, “my decision to renounce the active exercise of the ministry does not revoke this.” Thus it is clear that Benedict XVI did not validly resign the papacy, since to validly resign the office, the pope must correctly express his intention to renounce his munus: Can. “332 § 2 – Si contingat ut Romanus Pontifex muneri suo renuntiet, ad validitatem requiritur ut renuntiatio libere fiat et rite manifestetur, non vero ut a quopiam acceptetur.” Not only did Benedict not correctly express any intention to renounce his munus, but he expressly stated that his renunciation of the ministry does not revoke his munus. Therefore, he erroneously stated that his renunciation vacates the chair — an invalidating substantial error: “Can. 188 — Renuntiatio ex metu gravi, iniuste incusso, dolo vel errore substantiali aut simoniace facta, ipso iure irrita est.”
This “substantial error” has created the appearance that two men in papal attire with papal names, and who address each other as “Your Holiness”, share the petrine munus; and therefore it is PATENTLY ABSURD for , the Bergoglians to claim that the election and subsequent “unanimous acceptance”, which resulted from an election conditioned on a defect of intention and an invalidating substantial error; and which is not exclusive, but includes both mens’ claim on the papacy, somehow proves that Bergoglio is the true pope! A plain and simple application of the cited canons proves beyond all shadow of doubt that Benedict’s resignation was invalid, and consequently, he is still the only reigning pope. Bergoglio is the heretic-antipope foretold in the secret of Fatima; and according to the Secret of Fatima, the heretic-antipope will lead the stampede into apostasy.written by Father Paul Kramer
+++++++++++++++++++++++++++++++++++++++++++++++++++++++++++++++

It is impossible for the pope to relinquish only the active exercise of the petrine
ministry and hand it over to a successor, since that would amount to an attempt to
divide an office that is indivisible. Hence, Pope Benedict’s attempt to divide the
papacy, according to the formula of the Karl Rahner proposal to reform the papacy
by dividing it between two or more individuals; necessarily results in a juridically invalid act, since, the office of the supreme
pontiff cannot be divided in the mamner that the episcopal office is sometimes
divided in other diocese between the ordinary of the diocese and a coadjutor with
power of governance.

The reason why it is impossible is because the pope, who in virtue of the plenitudo
potestatis of his office can deprive an ordinary of his jurisdiction, and hand it over
to a coadjotor; whereas the papal office is indivisible — and therefore the office and

The Prophecy of St. Francis

Shortly before he died, St. Francis of Assisi called together his followers and warned them of the coming troubles, saying:

1. The time is fast approaching in which there will be great trials and afflictions; perplexities and dissensions, both spiritual and temporal, will abound; the charity of many will grow cold, and the malice of the wicked will increase.

2. The devils will have unusual power, the immaculate purity of our Order, and of others, will be so much obscured that there will be very few Christians who will obey the true Sovereign Pontiff and the Roman Church with loyal hearts and perfect charity. At the time of this tribulation a man, not canonically elected, will be raised to the Pontificate, who, by his cunning, will endeavour to draw many into error and death.

3. Then scandals will be multiplied, our Order will be divided, and many others will be entirely destroyed, because they will consent to error instead of opposing it.

4. There will be such diversity of opinions and schisms among the people, the religious and the clergy, that, except those days were shortened, according to the words of the Gospel, even the elect would be led into error, were they not specially guided, amid such great confusion, by the immense mercy of God.

5. Then our Rule and manner of life will be violently opposed by some, and terrible trials will come upon us. Those who are found faithful will receive the crown of life; but woe to those who, trusting solely in their Order, shall fall into tepidity, for they will not be able to support the temptations permitted for the proving of the elect.

6. Those who preserve in their fervour and adhere to virtue with love and zeal for the truth, will suffer injuries and, persecutions as rebels and schismatics; for their persecutors, urged on by the evil spirits, will say they are rendering a great service to God by destroying such pestilent men from the face of the earth. but the Lord will be the refuge of the afflicted, and will save all who trust in Him. And in order to be like their Head, [Christ] these, the elect, will act with confidence, and by their death will purchase for themselves eternal life; choosing to obey God rather than man, they will fear nothing, and they will prefer to perish rather than consent to falsehood and perfidy.

7. Some preachers will keep silence about the truth, and others will trample it under foot and deny it. Sanctity of life will be held in derision even by those who outwardly profess it, for in those days JESUS CHRIST WILL SEND THEM NOT A TRUE PASTOR, BUT A DESTROYER.

1 Response to MUCH HAS BEEN WRITTEN ABOUT BENEDICT’S RESIGNATION AND FRANCIS’ ‘ELECTION’. HERE IS THE BEST ANALYSIS I HAVE READ UP TO NOW