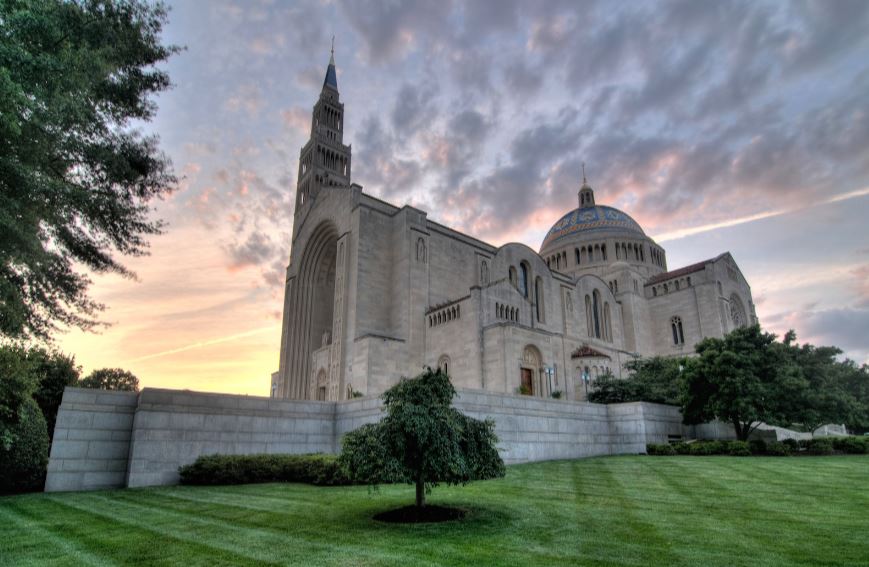 WASHINGTON, DC, April 28, 2018 (The Remnant Press) — A Solemn Pontifical Mass according to the Extraordinary Form was celebrated today at the Basilica of the National Shrine of the Immaculate Conception in Washington, D.C. The Pontifical Mass was organized by the Paulus Institute for the Propagation of Sacred Liturgy in honor of the tenth anniversary of the motu proprio Summorum Pontificum, issued by Pope Emeritus Benedict XVI in July, 2007. Although the tenth Anniversary of Summorum Pontificum was in July, 2017, the Pontifical Mass was delayed until the completion of the Trinity Dome over the transept of the basilica.

The Mass was celebrated by the Most Reverend Alexander K. Sample, archbishop of Portland in Oregon. Rev. Fr. D. B. Thompson of the Diocese of Lake Charles, Louisiana, served as assistant priest, Rev. Fr. Gregory Pendergraft of the F.S.S.P. served as deacon, and Canon Andrew Todd of the Institute of Christ the King Sovereign Priest served as the subdeacon. The first master of ceremonies was Rev. Fr. Zachary Akers, F.S.S.P. The second master of ceremonies was Rev. Fr. Gregory Eichman, F.S.S.P. Rev. Fr. Joseph M. Bisig, F.S.S.P., and Rev. Canon Matthew Talarico, Institute of Christ the King, served as deacons at the throne. Rev. Fr. Ernest Cibello, pastor of St. Mary Catholic Church in Hagerstown, Maryland, served as subdeacon of the cross.

The Mass celebrated was the Votive Mass of the Immaculate Heart of the Blessed Virgin Mary in Eastertide. The music was provided by the schola cantorum of The Lyceum School, the schola cantorum of St. John the Baptist Catholic Church in Allentown, New Jersey, the Choir of the Basilica of the National Shrine of the Immaculate Conception, the Washington Cornett and Sackbutt Ensemble, and the schola of St. Mary Mother of God Church in Washington, D.C. The propers of the mass were sung in Gregorian chant, and motets by Claudio Monteverdi, Pierre de Manchicourt, Thomas Tallis, Vincenzo Ugolini, and Luca Marenzio were performed. 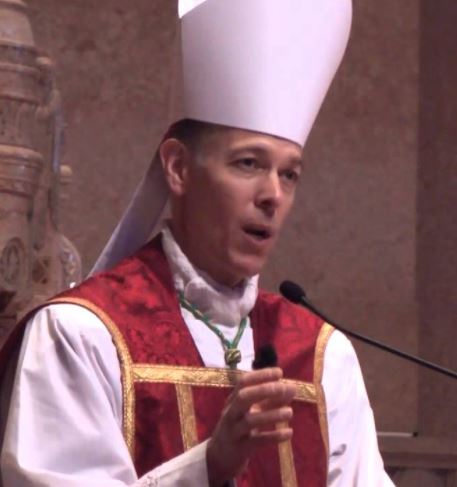 In his sermon, Archbishop Sample spoke about Summorum Pontificum and the relationship of the Church today with the Extraordinary Form of the Mass. The archbishop, who said that he decided to learn the traditional Latin Mass on his own after Pope Benedict issued the motu proprio in 2007, thanked the pope emeritus profusely on behalf of all those present for giving the Church so great a gift as to allow the Latin rite to be celebrated once more.

He noted that in this day and age, it is the temptation of many Catholics to assume that the Catholic Church essentially hit a restart button at Vatican II and that it is unnecessary to inform oneself about the Church prior to the council, especially concerning the Sacred Liturgy. Archbishop Sample explained that knowledge of the Traditional Latin Mass is in fact quite necessary even for those who attend the Novus Ordo, as it is when the Extraordinary Form and the Ordinary Form work together for the good of the Church that the Church will thrive. There must, he said, be a “hermeneutic of continuity” between the pre-Vatican II Church and the post Vatican II Church. While stressing that he was not challenging the ideas and reforms of the Second Vatican Council, he acknowledged that the way in which those reforms were carried out has led to many of the problems the Church faces today. He assured the congregation that he fully believed in the validity and legitimacy of the Novus Ordo, but he expressed concern over the many liturgical abuses that the rite has shown itself to be prone to.

Archbishop Sample also noted the large number of young people present in the congregation. He said that many in the Church today do not understand why so many young people are drawn to the Latin Mass – a rite in which they did not grow up and with which they had no prior contact. That, the archbishop said, is exactly the question that should be asked: why are the young people drawn to the mass? Why is there such a desire among the young people of the Church to return to the Rite which their parents and grandparents attended? The Extraordinary Form of the Mass is a beautiful, solemn, and enriching Mass, he said. It is a Mass that was celebrated by generations and generations of faithful Catholics, a Mass that drew countless new converts to Catholicism, and a Mass “that produced saints.”

The Mass took place at the high altar of the upper church of the National Shrine, which, according to the National Shrine’s website, seats 3,500 people and can accommodate up to 6,000. It was encouraging to see that almost every pew in the Church was full and that so many of the faithful present were young. A significant number of the young people in the congregation, as well as many of the altar servers, were college students and seminarians from the nearby Catholic University of America. Also present were representatives from several chapters of Juventutem America. We should hope and pray that this wonderful experience, for many of them their very first experience of the Latin mass, will inspire these college students and young people to learn more about the Latin Mass and to grow in their faith.