Pope Benedict installed effective procedural reforms on clerical sex abuse; Francis The Merciful has all but completely dismantled or reversed those changes. Pope Benedict ‘had defrocked or suspended more than 800 priests, his reforms specifically included bishops who refused to act against priest-abusers. These reforms, and removals by comparison have practically ceased under Francis and his Cardinal in charge of sex-abuse cases, Cardinal Sean O’Malley of Boston 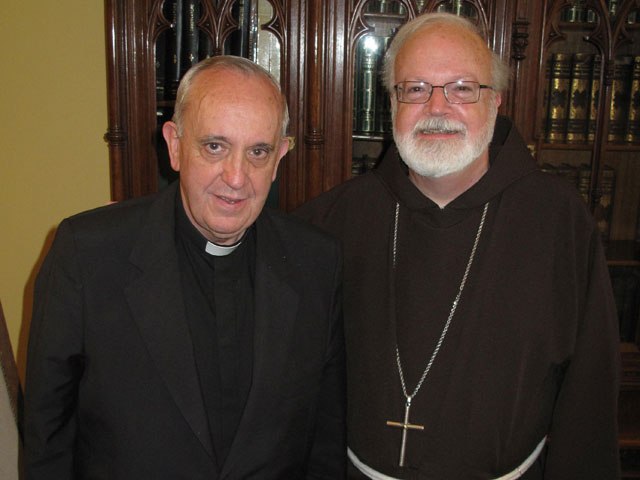 It appears that Francis and O’Malley don’t receive letters when it’s about sex abuse of minors.

Pope Francis’s own chief adviser on sexual abuse matters and president of the Commission for the Protection of Minors Cardinal O’Malley personally gave a sex abuse victim letter to Francis that he never received.

Now, O’ Malley received a letter from a priest that one of the most influential Cardinals in the United States was a sex abuser and he never received it.
[http://m.ncregister.com/blog/joan-desmond/cardinal-omalley-says-more-than-apologies-needed-in-cardinal-mccarrick-scan?utm_source=feedburner&utm_medium=feed&utm_campaign=Feed%253A+NCRegisterDailyBlog+National+Catholic+Register#When%3A2018-07-24+22%3A24%3A01]

O’ Malley’s record as Francis’s own chief adviser on sexual abuse matters shows according to
journalist Hilary White that Francis and O’ Malley have “all but completely dismantled” the “effective” reforms instituted against clerical sex abuse by Benedict:

“Pope Benedict installed effective procedural reforms on clerical sex abuse; Francis… has all but completely dismantled or reversed those changes… Benedict ‘had defrocked or suspended more than 800 priests for past sexual abuse between 2009 and 2012’… His reforms specifically included bishops who refused to act against priest-abusers… ‘This Pope has removed two to three bishops per month’… These reforms – and – removals – have ceased entirely under Francis [and O’Malley].” (Remnant, “Pope Francis Accused of Inaction in Notorious Sex Abuse Cases, January 25, 2017)

What is O’ Malley’s record in his diocese according the Bishop Accountability website (http://www.bishop-accountability.org/OMalley_Fact_Sheet.htm):

When Cardinal O’Malley is described as papabile, his work on sexual abuse cases as a bishop is often cited.  While O’Malley has considerable experience as a “fixer” in the troubled dioceses of Fall River MA, Palm Beach FL, and Boston, his performance in that role raises concerns.  A close look at the cardinal reveals a career-long pattern of resisting disclosure of information, reinstating priests of dubious suitability, and negotiating mass settlements that are among the least generous in the history of the crisis.
See also a PDF of this Fact Sheet.

As Boston archbishop, Cardinal O’Malley has disclosed minimal information about accused priests. He did not release a list of accused priests until August 2011, years after committing to do so, and then he re-packaged information that was already public: his list did not reveal the name of even one accused priest who was not already known. In fact, he admitted to withholding the names of 91 accused archdiocesan priests – even though the archdiocese had settled with some of their victims and regarded the allegations as ‘compelling and credible.’ [See O’Malley’s August 25, 2011 letter.]
And unlike at least 10 of more than 25 other US bishops who have released lists, O’Malley refused also to name accused religious order clerics. According to a Boston Globe investigation, at least 70 accused order clerics – including some who have gone to prison for child sexual abuse – are missing from the cardinal’s list.

With only 159 names, O’Malley’s long-awaited list was far shorter than expected. In a secret report by the archdiocese’s abuse delegate in 2000 – two years before the crisis broke in Boston – the archdiocese cited a total of 191 accused priests. In his 2003 report, Massachusetts Attorney General Reilly stated that 237 Boston priests had been accused.

According to a largely overlooked archdiocesan report released in April 2006, Cardinal O’Malley’s Review Board “cleared” 45% of priests (32 of 71) investigated for child sexual abuse from July 2003 through December 2005. In these 32 cases, the Board “did not find probable cause that sexual abuse of a minor had occurred.” The names of most of these cleared priests still are not known.

Cardinal O’Malley’s 45% clearance rate of accused priests is much higher than the national average. Catholic Church officials nationwide in 2005 deemed only 10% of allegations false or unsubstantiated.

3. Under O’Malley, the Boston archdiocese has a double standard for employees accused of sexual misconduct. Accused priests may remain in place; accused laypeople are suspended immediately.

The Archdiocese’s published policy indicates that the removal of a priest who is under investigation is not mandatory: “For the period of the preliminary investigation, the Archbishop may request that an accused cleric voluntarily refrain from the public exercise of sacred ministry …” However, if the accused is a lay employee, the Archdiocese’s response is unambiguous and strict: “[T]he supervisor will immediately place the accused person on administrative leave.”

Rev. Jerome Gillespie was accused in 2005 of soliciting oral sex from a woman and her 12-year-old daughter.  Although most charges against him were dismissed, the priest agreed to “sufficient facts” to a charge of annoying and accosting a member of the opposite sex, and a judge ordered him to be evaluated for sex offender treatment and to have no contact with minors for two years without first disclosing his case to guardians. In 2008, it was discovered that O’Malley had quietly returned Gillespie to ministry. After SNAP publicized Gillespie’s reinstatement, O’Malley again withdrew the priest from ministry.

Rev. Thomas Curran was removed from ministry by Cardinal Law in 2002 after a convicted child rapist accused Curran and Rev. Paul Shanley of raping him repeatedly as a boy.  In 2007, Cardinal O’Malley announced that Curran had been cleared of all charges and assigned “permanent disability” status. In 2010, another victim of Curran came forward, and the priest was placed on leave again.
Rev. James Power was accused in 1993 of sodomizing a 13-year-old boy in 1980. In 1996, the archdiocese settled with the victim for $35,000. In 2002, Cardinal Law removed Power from ministry and a second victim came forward. The priest’s personnel file, made public in 2002, included an unsigned note, dated August 27, 1993, saying “100% positive other kids.”  In 2009, Cardinal O’Malley announced the archdiocese was “unable to substantiate“ either allegation and that Power was removed from leave and assigned senior priest status.

5. As bishop of Fall River MA, O’Malley was accused by the local prosecutor of concealing offenders’ names until the statute of limitations had expired.

As Bishop O’Malley was leaving the diocese of Fall River, Massachusetts, in 2002, the local prosecutor, Bristol County District Attorney Paul Walsh, took the extraordinary step of publicly rebuking the bishop for a decade-long delay in submitting to him the names of 21 accused priests. “Why didn’t he release these names to us 10 years ago?” the DA said. By the time O’Malley gave DA Walsh the priests’ names in 2002, the time window for prosecuting had closed for all but one of the cases.

6. Compared to other bishops, Cardinal O’Malley has not been financially generous or fair to victims of clergy abuse.
In terms of per-survivor amounts, the mass settlements O’Malley negotiated in Fall River in 1992 and in Boston in 2003 have been ungenerous – both rank in the lower 50%.

Pray an Our Father now for the restoration of the Church.

3 Responses to Pope Benedict installed effective procedural reforms on clerical sex abuse; Francis The Merciful has all but completely dismantled or reversed those changes. Pope Benedict ‘had defrocked or suspended more than 800 priests, his reforms specifically included bishops who refused to act against priest-abusers. These reforms, and removals by comparison have practically ceased under Francis and his Cardinal in charge of sex-abuse cases, Cardinal Sean O’Malley of Boston