Is the USA becoming a perpetual voter fraud country like Venezuela?

Is Biden a It’s a Wonderful Life-like Mr. Potter & has he turned America into a Venezuelan Hyperinflation “Sleazy, Amoral place named ‘Pottersville'” with Voter Fraud?

On Christmas Eve 1945, George’s Uncle Billy goes to the bank to make an $8,000 cash deposit and encounters Mr. Potter. Billy takes Potter’s newspaper and opens it to the front page, gloating over the heroic war record of George’s brother Harry, but then unintentionally puts his deposit in the folded newspaper before handing it back to Potter. Back in his office, Potter finds the money and realizes Uncle Billy’s mistake, but keeps the money knowing that the bank examiner is at the Building & Loan on a routine visit, and the missing money will ruin the Baileys. George later visits Potter to ask for a loan to cover the lost funds. When Potter asks George for collateral, all he has is a $500 equity in a life insurance policy with a face value of $15,000; Potter declares that George is worth more dead than alive, and then swears out warrants against him for criminal malfeasance and misappropriation of funds. Potter’s final appearance in the film occurs later that evening. George, deliriously happy on his way home, shouts “Merry Christmas” to Potter through his office window. Potter responds, “Happy New Year to you – in jail!” Little does Potter know that George, on the verge of suicide and wishing he had never been born, had just been shown a vision by his guardian angel, Clarence Odbody, of what the town would have been like had George never existed. In this alternate reality, the Building & Loan has long since closed, and the town has become a sleazy, amoral place named “Pottersville”. As George reaches home he finds that Mary has asked neighbors and friends to scatter through town to raise what funds they can to help George. To top it all off, they receive a wire from George’s wealthy friend, Sam Wainwright, who instructs his office to advance George up to $25,000, which more than covers the loss and yet again blocks Potter’s attempt to close the Building & Loan. – Wikipedia [https://en.wikipedia.org/wiki/Mr._Potter]CNBC Poll: Inflation Surpasses Coronavirus as Number One National Concern – Canon 212
Worst Inflation in 40 Years as Consumer Prices Soar 6.8 Percent – Canon 212

BlabberBuzz News wrote “Bidenflation Continues Ruining Everything In Its Path“:

Inflation suddenly quickened in August, as deficiencies of a wide range of consumer goods and services increased prices.

The Personal Consumption Price Index for August increased 4.3 percent from one year ago, showing increases in the prices paid by consumers for both goods and services, Commerce Department data showed Friday. That is the fastest speed of inflation since January 1991.[https://www.blabber.buzz/blab/pop/1030851-bidenflation-continues-ruining-everything-in-its-path?utm_source=c-alrt&utm_medium=c-alrt-email&utm_term=c-alrt-AOL&utm_content=6pmvgfDW-0NOF0MqPHZ7iOa5ucSyM-vSD6Ynm5JYtSzg.A&lctg=c6b2b5ab2bb6ca21486566f740be3c9d]

It appears that Joe Biden may be like It’s a Wonderful Life’s Mr. Potter” who is turning America into a Venezuelan hyperinflation “sleazy, amoral place named ‘Pottersville.'” Is Biden America going to be the next country to be famous for its hyperinflation like Venezuela?:

Hyperinflation in Venezuela is the currency instability in Venezuela that began in 2016 during the country’s ongoing socioeconomic and political crisis.[1] Venezuela began experiencing continuous and uninterrupted inflation in 1983, with double-digit annual inflation rates. Inflation rates became the highest in the world in 2014 under Nicolás Maduro, and continued to increase in the following years, with inflation exceeding 1,000,000% by 2018. In comparison to previous hyperinflationary episodes, the ongoing hyperinflation crisis is more severe than those of Argentina, Bolivia, Brazil, Nicaragua, and Peruin the 1980s and 1990s, and that of Zimbabwe in the late-2000s.[https://en.wikipedia.org/wiki/Hyperinflation_in_Venezuela]

Is the USA becoming a perpetual voter fraud country like Venezuela?

The Epoch Times reported that Venezuelan leftist Hugo Chávez used massive voter fraud to become “a new kind of dictator” according to a “former CIA official and his team [who] found through their investigation that Chávez started to focus on [Smartmatic] voting machines to ensure victory as early as 2003, when over 20 percent of Venezuelans signed a recall referendum to remove him from his president position”:

It’s unconventional warfare. It is basically a 9/11 attack of the electoral system,” said the former CIA official who is an expert in Latin American politics and counterterrorism.

His big concern is that compromised voting systems controlled by corrupt transnational organizations will destroy the rule of law and democracies that protects people’s freedom and rights.

Hugo Chávez, a controversial politician, served as president of Venezuela from 1999 to 2013, later dying from cancer at the age of 58.

But in the past decade, the authenticity of his wins in all these elections was questioned by his opponents and the free world, but no allegations were verified by a judicial system.

The former CIA official and his team found through their investigation that Chávez started to focus on voting machines to ensure victory as early as 2003, when over 20 percent of Venezuelans signed a recall referendum to remove him from his president position.

“He [Chávez] started talking to a company called Indra, a Spanish company which [ran] elections [in Venezuela at that time,]” he said.

After figuring out Indra’s voting machines couldn’t be manipulated, Chávez contacted Smartmatic, a voting machine supplier that was first founded by three Venezuelans—Antonio M. Mugica, Roger Piñate, and Alfredo Anzola—in Venezuela in 1997 and then registered in Delaware in April 2000.

“There was a bidding for the referendum election [in 2003]. Indra got disqualified and Smartmatic won that. So in the 2004 recall referendum, Smartmatic was taking care of [the counting],” he said.

In his eyes, history repeated itself in the U.S. great election of 2020.

In June 2004, Smartmatic participated in a Venezuelan recall referendum. “At midnight of the election, the machines were counting. At 3:00 a.m., Chávez suddenly won by ten percent. Before 3:00 a.m., the result was opposite,” he said.

After that, Chávez didn’t lose any election no matter how much opposition he faced in Venezuela.

“So basically, it is a new kind of dictator. In Caracas [capital of Venezuela], they had to start trying to exercise totalitarian power,” he concluded.

He said that similar things happened in several states during the 2020 U.S. election, in which the poll results suddenly changed from favoring President Donald Trump to Democratic presidential candidate Joe Biden at 3:00 a.m. on Nov. 4, the day after the election. [https://www.theepochtimes.com/voting-machines-are-a-totalitarian-tool-dressed-in-a-coat-of-democracy-ex-intelligence-official_3604150.html]

Yesterday, the National Pulse reported that “Mark Malloch-Brown, the chairman of the voting company Smartmatic… [s]peaking on behalf of Smartmatic…  admitted in 2010 that ‘part of our technology is licensed from Dominion. ‘”

Remember the Ex-CIA official told the Epoch Times “that [totalitarian] Chávez started to focus on [Smartmatic] voting machines to ensure victory as early as 2003” which “‘
is licensed from Dominion.'” [https://thenationalpulse.com/breaking/soros-smartmatic-president/] 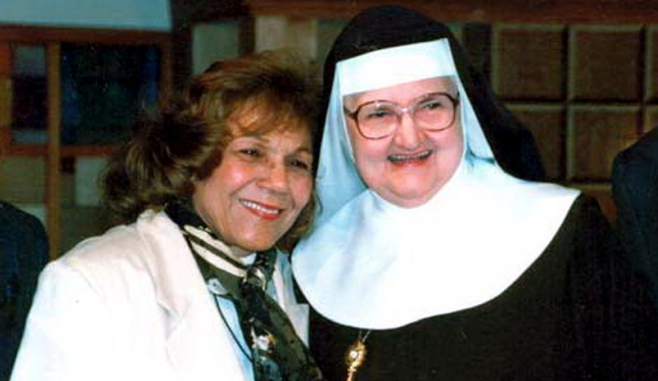 Coincidentally, Maria Esperanza de Bianchini of Venezuela who “has been dubbed the female Padre Pio and is a candidate for sainthood” died one year after “Chávez started to focus on [Smartmatic] voting machines to ensure victory.” Esperanza de Bianchini “made a prophecy saying, ‘It will start here.’ This she said in her native Venezuela which at that time was a prosperous country”:

Servant of God Maria Esperanza de Bianchini of Venezuela (died 2004) who accurately predicted the 9/11 attack on the Twin Towers in New York City. She has been dubbed the female Padre Pio and is a candidate for sainthood…

… At one time, she made a prophecy saying, “It will start here.” This she said in her native Venezuelawhich at that time was a prosperous country because of its large crude oil reserves.

Now we know Venezuela is in dire economic crises, one which started in 2014 amid socialist policies that, because of the drop in oil prices, led to a situation worse than the Great Depression in the US, with 32 million Venezuelans unable to afford food, its hospitals without means to even buy basic medicines.[https://www.sunstar.com.ph/article/1858661]

Will the United States become the next totalitarian impoverished Venezuela if we don’t fight the massive voter fraud that is attempting to destroy America?
Pray an Our Father now for reparation for the sins committed because of Francis’s Amoris Laetitia.

– Will US be Venezuela?: Ex-CIA Official told Epoch Times “Chávez started to Focus on [Smartmatic] Voting Machines to Ensure Victory as early as 2003”: http://catholicmonitor.blogspot.com/2020/12/will-us-be-venezuela-ex-cia-official.html– Tucker Carlson’s Conservatism Inc. Biden Steal Betrayal is explained by “One of the Greatest Columns ever Written” according to Rush: http://catholicmonitor.blogspot.com/2021/01/tucker-carlsons-conservatism-inc-biden.html?m=1 – A Hour which will Live in Infamy: 10:01pm November 3, 2020:
http://www.thecatholicmonitor.com/2021/01/a-hour-which-will-live-in-infamy-1001pm.html?m=1 What is needed right now to save America from those who would destroy our God given rights is to pray at home or in church and if called to even go to outdoor prayer rallies in every town and city across the United States for God to pour out His grace on our country to save us from those who would use a Reichstag Fire-like incident to destroy our civil liberties. [Is the DC Capitol Incident Comparable to the Nazi Reichstag Fire Incident where the German People Lost their Civil Liberties?: http://catholicmonitor.blogspot.com/2021/01/is-dc-capital-incident-comparable-to.html?m=1 and Epoch Times Show Crossroads on Capitol Incident: “Anitfa ‘Agent Provocateurs‘”:
http://catholicmonitor.blogspot.com/2021/01/epoch-times-show-crossroads-on-capital.html?m=1]
Pray an Our Father now for the grace to know God’s Will and to do it. Pray an Our Father now for America. Pray an Our Father now for the restoration of the Church as well as the Triumph of the Kingdom of the Sacred Heart and the Immaculate Heart of Mary.