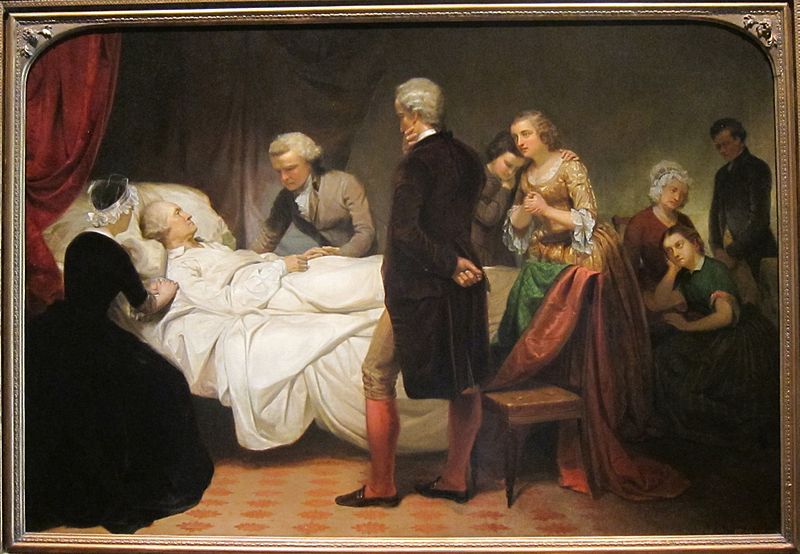 George Washington on his death bed.

Palliative care proponents argue that hospice is for people whose “days are numbered,” whereas the palliative care model is supposedly more encompassing.  Palliative Care proponents say that they are all about serving those whose days are numbered, just like the Hospice model, but that they also provide comfort care to those who are not terminal.  I worked with the palliative team for a year, and I have my doubts about this.

In twelve years as an ordained Catholic priest, eleven of those years were served by me as a respected pastor of diocesan parishes, and one of those years was spent by me as the “go to” Catholic priest chaplain in a Protestant hospital in the what is referred to as the “Southwest Region” of hospitals.  The people I worked with in the chaplain department were respectful of me and of my Church, and even though the hospital is Protestant in name, it is safe to say that 90% of employees there and 80% or more of patients there are Roman Catholic.

To reveal the name of the hospital I worked at would bring no positive benefit, and it could potentially hurt the people I worked with in the chaplain department.  The people in the chaplain department do not make policy, and they are good at what they do.  Just as I will keep the hospital name anonymous, I will also use a pseudonym for this article and subsequent articles related to this one, for obvious reasons.  After speaking with Catholic and Protestant chaplains at other hospitals in the Southwest Region of the U.S.A., we have come to realize that all our observations and insights are the same, vis a vis palliative care and its agenda.

In my first two months as a Catholic Chaplain in a hospital with over 600 beds, I came to the very fast realization that death ministry would be my ministry day and night, every day and night, for the next twelve months.  In a thirty day month, I would get two full Saturdays off and two full Sundays off, but other than that, I was either spending the entire day or entire day and night at the hospital.  On a personal note, I must admit that this was very difficult ministry.  As a pastor I was accustomed to baptisms twice a month, weddings, marriage preparations, First Communions, and so on.  This particular priestly ministry as a full time hospital chaplain is very demanding, emotionally and spiritually.  While hospital ministry is something I eagerly do as a pastor, to do chaplain ministry full time is beyond my strength to do again.  There would be anywhere from one to seven deaths every twenty four hours at this hospital, and there usually would be around three deaths per twenty four hours.  Since most terminal patients were Catholics in this hospital, I would be the chaplain called on for bioethical advice and/or questions.  The nature of my ministry, and the volume of it, required me to work closely with the Palliative Care Team.

Leadership and ownership at the Protestant Hospital had daily and nightly requirements for the chaplain department and its individual chaplains.  Each of the eight chaplains was responsible for two to three units of the hospital on a daily basis.  Every three months, each chaplain would be given a different set of hospital units to visit on a daily basis.  During the summer, I might have been assigned the 20 beds in MICU, the 18 beds in NICU, and the 35 rooms on the oncology/cancer floor.  It was my duty to visit new patients in each of those rooms on a daily and nightly basis, and when time permitted, it was my duty to visit patients for second and third visits.  Most of the time, there was no fourth visit, as the patient either died or was discharged from the hospital.

In addition to the daily visits of rooms, other duties of the chaplains consisted of:

1- responding to heart attack codes or stroke codes broadcast on the PA system (this seemed to happen every one to two hours)
2- presenting patients with Advanced Directive information, informing them of options for medical power of attorney, living wills and so on;
3- responding to families who belonged to the same Church belief system, whenever they had bio-ethical issues or questions;
4- helping the palliative care team make visits to patients.

The Catholic priest chaplain was expected to see patients who were “actively dying,” or to see someone who had just passed away and their family.  The Catholic priest was always in high demand, and I always lamented the fact that there were not more of us.

The term “palliative care” finds its etymology in the Latin word “pellis,” which means “skin.”  For us Catholics, we are familiar with the annual custom wherein the pope places the pallium over the skin/shoulders of newly ordained metropolitans bishops. The pallium, placed on bishops’ shoulders, is made of wool, reminding us of the Good Shepherd who placed the lamb on his shoulders. The pallium is a burden which the bishop is supposed to carry, inasmuch as he is to care for his lambs and sheep.  “Palliative Care” pretends to relieve the burden of suffering that fate has placed on people’s shoulders.

The palliative care team would give an “informational lecture” to us lowly chaplains about once every two to three months.  In these lectures, we were shown charts and diagrams, which were designed to anesthetize our consciences.  We chaplains were indoctrinated on how much money is wasted on people at the end of life.  We chaplains were shown diagram after diagram, proving that 95% of medical attention is spent on patients in their last one to two years of life.  We were left to induce and deduce the conclusion:  “The faster you can end a patient’s life, the more money will be saved by the hospitals.”  They wanted to use us chaplains as the pawns in their goal of getting patients to stop pushing for treatments and solutions to sicknesses and diseases, and urge “comfort care” so that it becomes the end all, over and against health and cure.

The palliative team that I worked with for one full year definitely did a lot of good work, I cannot deny that.  As a friend of mine is fond of saying though:  “Even a broken clock is correct two times a day and night!”  The palliative teams do help to decrease suffering and pain, of that I am sure.  Does the end justify the means though?  If the goal is to get rid of chronically ill people by letting them die off sooner than later, then is it morally good only to focus on the good which palliative teams accomplish, namely, “comfort care”?

One of the women I ministered to had alzheimer’s, and she was in her 80’s.  This woman had a stroke and was in a coma, and the palliative team urged the 7 adult children to stop asking that medicine be administered to fight off infection, so as to expedite “natural death” which would let her be happy sooner than later.  The palliative team urged the adult children of the woman to agree to the removal of nutrition and hydration, and after a long meeting and looking at literature which I provided them, the eldest son, who had at first agreed to this, changed his mind and embraced the Catholic position.  The adult son said to five of the siblings who wanted to follow the palliative team’s advice:  “Have any of these damn doctors ever died from removal of nutrition and hydration?  How can they tell us that our mom won’t know or won’t feel the pain of death by starvation?  Hell no!”  The son later said the same words to the doctor.

A week later, the mother woke up and talked, telling each of the children that she loved them.  About two weeks later, the mother died naturally, while still receiving nutrition and hydration through a feeding tube (the feeding tube is not considered “extraordinary care”).  Had the children listened to the palliative team, they would have been robbed of the beautiful goodbye, and they would have had to live with the knowledge that they killed their own mother.  Americans need to wake up and resist the agenda of palliative teams.  Once Palliative Teams are assigned to a patient is established “comfort care” becomes the end all and the primary care doctor can lose a lot of his control once the palliative team takes over.  Take heed and beware!

1 Response to IS PALLIATIVE CARE BECOMING SYNONYMOUS WITH PASSIVE EUTHANASIA?