WHAT DOES IT SAY WHEN TWO DICTATORS SHAKE HANDS 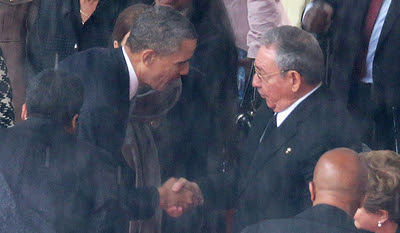 President Barack Obama paused to shake hands and speak with Cuban dictator Raul Castro at Nelson Mandela’s funeral in South Africa. The handshake took place on the same day that Castro’s thugs were cracking down on nonviolent dissidents across Cuba.

Be the first of your friends to like this.

NEW YEAR’S Day marks the 55th anniversary of Cuba’s communist revolution. It is the oldest — indeed the only — full-blown dictatorship in the Western Hemisphere. As Human Rights Watch noted in April, no other country in Latin America is ruled by a regime that “represses virtually all forms of political dissent.” More than half a century after Fidel Castro seized power with the promise that “all rights and freedoms will be reinstituted” — and more than seven years since Raúl Castro succeeded his brother as tyrant-in-chief — Cuba is consistently rated “Not Free” in Freedom House’s annual index of political and civil liberties worldwide.

All this is borne out by the US State Department’s most recent report on Cuba’s human-rights practices. Though written in mostly dry bureaucratese, the document confirms that the island is no Caribbean paradise for Cubans who have the temerity to oppose the regime. Skim just the opening paragraphs and phrase after phrase stands out, evoking the reasons why Cubans remain so desperate for freedom that even now many will gamble their lives at sea to escape the Castro brothers’ nightmare:

So when dissidents and pro-democracy activists held peaceful gatherings across the island to commemorate International Human Rights Day on December 10, they knew what to expect. Security agents were deployed to threaten, beat, and arrest the protesters; meetings were violently broken up; as many as 300 people were detained. Among the victims were dozens of members of Ladies in White, a dissident movement comprising the wives and mothers of Cuban prisoners of conscience. At least one woman was so severely beaten that she was taken to the hospital in Santiago for emergency surgery.

It would be heartening to report that the world erupted in outrage at this latest illustration of the Cuban government’s brutality, which was all the more vile given Cuba’s recent election to the UN Human Rights Council. Alas, no. While Raul Castro’s thugs were attacking and arresting nonviolent dissidents, Castro himself was at Nelson Mandela’s funeral in Soweto, where Barack Obama made a point of greeting the dictator with a friendly handshake. That got plenty of attention. It certainly got more than any gesture Obama has ever made to show solidarity with Cuba’s beleaguered human-rights heroes.

When he was running for president, Obama told voters in Florida that he would “never, ever, compromise the cause of liberty” and that his policy toward Cuba would “be guided by one word: Libertad.” In reality his policy has amounted to little more than dialing back US restrictions on travel and business with Cuba. That has proven an ideal way to further enrich the Castros and the Cuban military. It has done nothing to mitigate human rights atrocities in the hemisphere’s most unfree country.

If the president wishes to send a powerful message of support and encouragement to the champions of Cuban libertad, he need only share their stories with the world. Men and women are still being persecuted, tortured, and murdered in the Castros’ hellhole. Dissidents are still disappearing. Or dying in suspicious road accidents. Or being drowned while trying to flee the country.

Perhaps the president could spare a few minutes to look at a new report from the Cuba Archive, a US-based research project that seeks to meticulously chronicle every political killing or disappearance committed by Cuban rulers dating back to the Batista regime in 1952. For all the speculation that Raul’s accession to power would finally usher Cuba into a new era of pragmatism and reform, the toll in human lives keeps climbing higher and higher.

A president who has sworn to “never, ever compromise the cause of liberty” might speak out, for example, about the fate of Roberto Amelia Franco Alfaro, who was warned by the police to stop opposing the government — and then disappeared when he wouldn’t. He might call attention to the death of Sergio Diaz Larrastegui, a blind human-rights activist who was threatened with revenge if he wouldn’t turn informer — then fell abruptly, fatally ill. There have been scores of such cases in recent years, many thousands in the last few decades.

There is only one dictatorship in the Americas. On New Year’s Day it turns another year older. Cry, the beloved island.