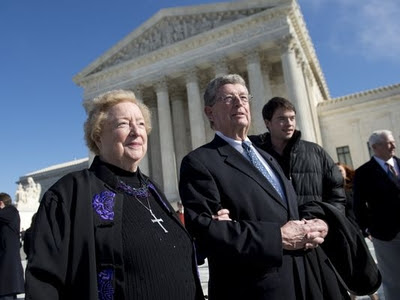 Eleanor McCullen, who challenged Massachusetts’ buffer-zone law, at the US Supreme Court building on Jan. 15.

The Court, the buffer zone, and the marketplace of ideas

Be the first of your friends to like this.

FOR ANYONE having trouble understanding why the Massachusetts law requiring a 35-foot “buffer zone” at abortion clinics is so offensive to the First Amendment, there was a moment during the oral arguments in McCullen v. Coakley — the Supreme Court case challenging the law — that crystallized the issue perfectly.

Massachusetts officials have always justified the 2007 buffer law as a narrow, impartial response to the problem of obstruction, disorder, and intimidation of women seeking abortions. That concern is understandably taken seriously in the state where John Salvi murdered two employees of Planned Parenthood clinics in 1994.

But federal and state statutes already make it illegal to interfere with anyone’s access to an abortion clinic, let alone to terrorize or harass women with violence or the threat of violence. No one disputes the constitutionality of those statutes, just as no one challenges Section (e) of the Bay State’s buffer-zone law, which allows anyone who “knowingly obstructs, detains, hinders, impedes or blocks another person’s entry to or exit from a reproductive health care facility” to be punished with fines and prison.

It is only the 35-foot exclusion zone that raises serious free-speech concerns.

Public buffer zones aren’t unknown in American life — courts have upheld speech and protest restrictions around funerals, political conventions, and polling places. Even the Supreme Court plaza is off-limits to demonstrators and protests. But such “time, place, and manner” regulations must be scrupulously neutral. What pro-life advocates and even pro-choice civil libertarians have maintained all along is that this buffer zone isn’t.

Jennifer Miller, the Massachusetts assistant attorney general who was lead counsel for the state, tried to persuade the justices that this was only a “congestion case.” The buffer zone is aimed only at “conduct” occurring within 35 feet of clinic entrances, she said. Any effect on speech “is simply incidental to the permissible conduct.” When Justice Stephen Breyer prompted Miller to explain why Massachusetts lawmakers had enacted a buffer zone far larger than the 8-foot bubble the Supreme Court had upheld in a 2000 Colorado case, she cited evidence of “pro-choice advocates swearing and screaming at pro-life advocates. . . . You had the Pink Group, which is a pro-choice organization, pushing and shoving and jockeying for position.”

Well, that was a novelty: You don’t usually hear the most draconian abortion-clinic buffer zone in the country defended as a response to disorderly behavior by pro-choice rowdies. But it didn’t change a fundamental problem with Massachusetts’ law: It explicitly exempts “employees or agents” of abortion clinics from the restrictions that apply to pro-lifers.

That was the point that Justice Samuel Alito deftly drove home in the oral argument’s most memorable exchange.

Let’s imagine, he said to Miller, that a patient about to go into an abortion clinic is approached by two women. The first, who works for the clinic, says: “Good morning, this is a safe facility.” The other one, who isn’t an employee, says: “Good morning, this is not a safe facility.” According to Massachusetts law, the first woman has done nothing wrong, while the second has committed a crime.

“And the only difference between the two is that they’ve expressed a different viewpoint,” Alito observed. “Now how can a statute like that be considered viewpoint-neutral?”

Miller gave it her best shot, insisting that the law isn’t focused in the two speakers’ opinions — only “on what they’re doing in the buffer zone.” The pro-life speaker wasn’t guilty of expressing a disfavored opinion, Miller said; she was guilty of being within the 35-foot perimeter without a permissible reason.

But that only begged Alito’s question, and Justice Anthony Kennedy didn’t let Miller get away with it. Of course the Massachusetts law doesn’t overtly ban people with anti-abortion viewpoints from crossing into the buffer zone. But in practical terms, that’s the law’s inescapable consequence, Kennedy said. “Are you saying that the consequences of what [legislators] write are irrelevant to this argument?” Ouch.

McCullen v. Coakley is bound up with abortion politics, but it could just as easily be a case about a buffer zone that barred pro-union activists from getting within 35 feet of a worksite where there was a labor dispute. It could be about antinuclear politics or animal welfare or gun control. Governments have the right to preserve public order, but only as a last resort may they do so by interfering with the marketplace of ideas. Is a 35-foot buffer zone really the last resort? I’d be surprised if the court says yes.