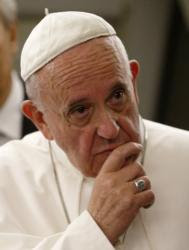 (Here is a picture of Pope Francis on Sunday evening, September 27, on the airplane during his airplane press conference, after leaving the United States)

INSIDE THE VATICAN REPORT

“Holy Father, you visited the Little Sisters of the Poor and we were told that you wanted to show your support for them and their case in the courts. And, Holy Father, do you also support those individuals, including government officials, who say they cannot in good conscience, their own personal conscience, abide by some laws or discharge their duties as government officials, for example in issuing marriage licenses to same sex couples? Do you support those kinds of claims of religious liberty?” —Terry Moran, ABC News, asking a question to Pope Francis on the papal airplane during an impromptu airplane press conference, on the evening of Sunday, September 27, just after the Pope left the United States to return to Rome

“Would that include government officials as well?” —Followup question by  Moran

The Secret Meeting of the Papal Trip

It was, arguably, the most significant meeting, symbolically, of the entire trip.

It should, therefore, be brought to the attention of the public, both in the Church, and in the secular world.

That the meeting occurred may, perhaps, spark controversy. This is evidently why it was kept secret. The Vatican evidently feared the “politicization” of a “pastoral trip” which clearly wished to emphasize the encounter with Jesus Christ, with the poor, with the faithful, with the handicapped, with children, and with all Americans of whatever background.

But there was also, evidently, a desire to meet with a person who has taken a controversial stand out of conscience.

The meeting is a fact, and facts are the material of which reality is composed, and human beings, though they cannot, as T.S. Eliot said, bear very much reality, strive nevertheless to live in reality. And reality cannot be understood without knowledge of the facts. Of what really happened.

On Thursday, September 24, in the afternoon after his historic address to Congress, just a few minutes before flying to New York City,  Pope Francis received, spoke with, and embraced Kim Davis — the Kentucky County Clerk who was jailed in early September for refusing to sign the marriage licenses of homosexual couples who wished to have their civil marriages certified by the state of Kentucky.

Kim and her husband had come to Washington for another purpose — Kim was to receive a “Cost of Discipleship” award on Friday, September 25, from The Family Research Council at the Omni Shoreham Hotel.

“Thank you for your courage”

Kim greeted him, and the two embraced.

Kim Davis gave me this account of the meeting shortly after it took place.

“The Pope spoke in English,” she told me. “There was no interpreter. ‘Thank you for your courage,’ Pope Francis said to me. I said, ‘Thank you, Holy Father.’ I had asked a monsignor earlier what was the proper way to greet the Pope, and whether it would be appropriate for me to embrace him, and I had been told it would be okay to hug him. So I hugged him, and he hugged me back. It was an extraordinary moment. ‘Stay strong,’ he said to me. Then he gave me a rosary as a gift, and he gave one also to my husband, Joe. I broke into tears. I was deeply moved.

Vatican sources have confirmed to me that this meeting did occur; the occurrence of this meeting is not in doubt.

Those who have seen the images of the film of the Pope answering the questions of the journalists on the airplane, on the matter of individual conscience, his determination and passion, are persuaded that he had in mind not a theoretical issue of conscience, but a specific person, someone he had met and embraced — someone whose burden, as a loving pastor, he had taken on his own shoulders.

He was thinking of this person when he answered those questions.

Why Did the Pope Meet Kim?

What was the purpose of this meeting?

Pope Francis met with Kim, embraced her, encouraged her, and, on the papal airplane, when asked the question cited at the outset, he stated, very strongly, that “conscientious objection” is “a human right.”

It is not surprising that the Holy Father met Kim Davis. The Holy Father is considered by many to be the father of all Christians, and is a man of compassion, a man ready to listen to and to comfort all who have suffered for their faith.

It was the Holy Father’s explicit request to visit a prison in Philadelphia, and he took the time to speak with each of the 100 prisoners he met on that occasion.

This is the attitude that prompted the Holy Father to receive Kim, who had been in jail.

And her response, from the very first moment of the meeting, showing great affection toward the Holy Father, showed that she responded to this desire of his to comfort her.

The meeting with the Holy Father was a moment of consolation for Kim.

It strengthened her conviction, she told me, to obey the law of God, before the  law of man.

It is the teaching of the Catholic Church that, when the human law contradicts the natural law, it is not a valid law.

This encounter between Pope Francis and Kim Davis takes on new importance since the ACLU (the American Civil Liberties Union) has asked that Kim be held in contempt of court.

This means that, should the judge agree with the ACLU, Kim could again in coming days be ordered to be held in prison.

In this sense, the Pope on September 24 clearly “wrapped his protective mantle” around Kim Davis, discreetly, in private, in a way completely hidden from the world, but in a way that was deeply moving for her personally, as a person of conscience.

As I write this, a man in an Oklahoma prison is about to be executed for a murder he claims he did not commit.

Pope Francis has asked for his life to be spared.

His name is Richard Glossip.

At this late moment, it is not likely that his execution will be stayed, so he will most likely be dead by the time you read this.

(Here is a link to his story.)

In Syria, Russian aviators today are flying sorties against ISIS positions, in an effort to shore up the regime of Syrian President Assad.

Workers in diverse places, including China, are being laid off this week, according to reports in the financial media, by the tens of thousands.

We live in a real world, with real problems, and in a fallen world, where egoism and cruelty have led to injustice and violence since the killing of Abel by his brother Cain.

And I write this to set into context the story of the very private meeting of Pope Francis with Kim Davis, which occurred on Thursday afternoon, September 24 — the afternoon of the Pope’s address to Congress.

There has been a storm of media attention regarding this encounter since I broke the story yesterday evening. “Why did the Pope wish to see Kim Davis, of all people?” many asked on websites across the internet.

The answer, I think, is this.

Amid all of his many and well-publicized gestures of affection, respect and tenderness during his trip — kissing children, caressing the sick and handicapped, blessing prisoners in a Philadelphia jail — gestures of tenderness which Father Jonathan Morris, when I was with him on Fox News during the Pope’s final Mass in Philadelphia, called the single most striking thing about the entire trip, Pope Francis also wished to offer a very private, intimate gesture of respect and tenderness to a woman who has been widely vilified and has suffered imprisonment due to her fidelity to her personal religious convictions with regard to marriage.

At first, many doubted that this story was even true. “Never happened,” many said, in web postings and in emails to me.

Of course the story is true.

The encounter did occur.

Why did the Vatican keep the meeting private? How was it even possible that it occurred, amid the scrutiny of the Pope’s every move by thousands of journalists 24/7? And, again, why Kim Davis?

The Vatican — in my opinion — decided to keep this encounter private because it wished to respect Kim’s intimacy and not create a circus around her and her husband which might have been emotionally overwhelming. It was respectful of her.

The meeting was possible — in my opinion — because America is still a free country, and people can make private plans to meet which are not necessarily rendered public instantly. There is still space for personal encounters out of the glare of the media spotlights.

Why Kim? This was a very personal encounter and it had — in my opinion — a personal purpose: to let Kim Davis know that the Pope understood and appreciated the emotional and spiritual cost of her stand of conscience to the point of going to jail for her beliefs.

To coerce that conscience, to compel it by force to act against its own deeply held beliefs, becomes, in this understanding, a type of cruelty, a type of violence against the person — a type of execution of that part of the person which is most intimate and precious.

In this sense, the Pope was recognizing that Kim, moved by deeply held beliefs, was under pressure, including time in jail, to submit those beliefs to an external power, the power of the state.

The case of Kim Davis and the Pope is not the only news story in this cycle, and it is not the most important.

The Pope’s decision to meet with Kim Davis was one additional gesture of tenderness toward a person who is passing through a very public struggle of conscience on a very public stage.

That he met and spoke with her privately is, in this context, entirely appropriate.

Pope Francis, in his “little gestures” toward those who are weak, suffering, on death row, and engaged with struggles of conscience, is coherent and inspiring.

“Oremus pro invicem” — “let us pray for one another.”

I am a retired Roman Catholic Bishop, Bishop Emeritus of Corpus Christi, Texas
View all posts by abyssum →
This entry was posted in Uncategorized and tagged Holy Father, Pope Francis. Bookmark the permalink.
%d bloggers like this: