FRANCIS’ FRIEND, FATHER SOSA, GENERAL OF THE JESUITS, “BAPTIZES HIMSELF A BUDDHIST” 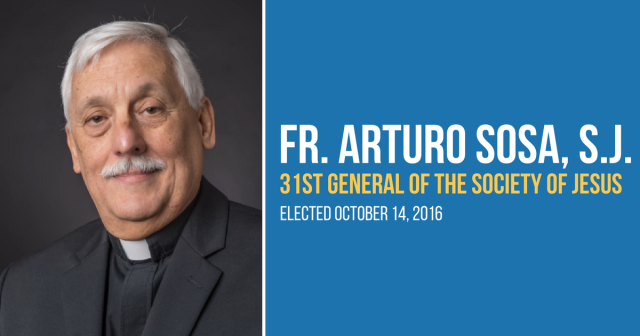 ‘It is not permitted to be present at the sacred rites of infidels and heretics in such a way that you would be judged to be in communion with them’.

I don’t even know where to start.

Thanks to a tip from a reader this morning, I headed over to the official website of the Conference of Jesuit Provincials in Latin America and the Caribbean.

While there, I did some looking around. I followed the link to their Facebook page. It’s colorful. Colorful in a way that carries its own possibly troubling meaning these days: The specific article I was alerted to was this one, about Fr. Arturo Sosa, the alwayscontroversial new Superior General of the Jesuits, who recently participated in a conference in Cambodia “between Buddhists and Christians who work for peace.”

He gave a homily, according to the article, on the themes of diversity, fear of difference, the “building of walls” that results from fear, and violence.

He then visited a Buddhist temple, where he addressed the 80 monks gathered there as follows:

Thank you so much for your time and the wisdom you shared today.

I have learned many things from you, and you have given me many things to think about and pray about. It is deeply consoling to see how we are united in our desire to promote peace and reconciliation in our world. It is also comforting to see how we share the belief that the path to peace begins from within, from the deep transformation of the inner person, from growth into detachment and loving-kindness.

I am grateful for what my Jesuit brethren do to promote dialogue with Buddhism here in Cambodia, whether at the level of academic exchange, prayer together or in the shared standard of living and common action at the service of the poor. Thank you for the meaningful and inspiring testimony of how you live our Jesuit mission of reconciliation.

Among the many things I have learned from Pope Francis, one is his insistence on the importance of creating a culture of encounter. He uses this phrase all the time. He believes that in our divided world, where some want to build walls, what we must do is to promote the encounter, without fear and respect, people who meet people, listening deeply and respectfully to each other, building relationships and friendships.

Thank you for this meeting event this afternoon, which has enriched me, and I hope it will bear fruit in service.

It was an entirely pedestrian address. Sanitized. No mention of Jesus Christ. No indication of Fr. Sosa’s desire to bring souls to the fullness of Truth, as so many of his forebears in the Society of Jesus were known for. As I finished reading through it, in fact, I couldn’t help but think of St. Francis Xavier, the apostle to Asia. One of the first Jesuits, he worked tirelessly in India, Malaysia, Japan, and had he not fallen ill before reaching the mainland, would have become a missionary to China as well. The Catholic Encyclopedia says of St. Francis Xavier:

It is truly a matter of wonder that one man in the short space of ten years (6 May, 1542 – 2 December, 1552) could have visited so many countries, traversed so many seas, preached the Gospel to so many nations, and converted so many infidels. The incomparable apostolic zeal which animated him, and the stupendous miracles which God wrought through him, explain this marvel, which has no equal elsewhere. The list of the principal miracles may be found in the Bull of canonization. St. Francis Xavier is considered the greatest missionary since the time of the Apostles, and the zeal he displayed, the wonderful miracles he performed, and the great number of souls he brought to the light of true Faith, entitle him to this distinction.

What the Jesuits of 2017 present us with instead in the example of their leader, Fr. Sosa, is the following image, with a bizarre caption that appears when one holds their mouse over the photo: If you can’t read it, it says, “Father Sosa is officially the first Superior Jesuit in Buddhist Baptism.” This is a rough machine translation of the caption written into the code of the page, which reads, in Spanish, “Padre Sosa es oficialmente el primer Superior Jesuita en bautizarse budista.” More clearly put: “Father Sosa is officially the first Jesuit Superior to baptize himself Buddhist.”

Now, I have no idea what it means to “baptize oneself Buddhist.” Probably because it doesn’t. Mean anything, that is. Buddhists don’t baptize. Buddhists don’t really even believe in God. As Carl Olson and Anthony Clark explained in this piece on Catholicism and Buddhism from Ignatius Insight:

It is sometimes said that Buddhism is atheistic. Yet Buddhism is not interested in the question of God, so it is more accurate to describe it as agnostic. Buddhism “works” whether or not there is a God. A Buddhist allows others to believe in a God or gods, but such beliefs are merely convenient means to the final end, which has nothing to do with a God or gods. “God is neither affirmed nor denied by Buddhism,” wrote Merton in Mystics and Zen Masters, “insofar as Buddhists consider such affirmations and denials to be dualistic, therefore irrelevant to the main purpose of Buddhism, which is emancipation from all forms of dualistic thought.”

It was the common teaching of the Church before the heady days of ecumenism and interfaith mania following the Second Vatican Council that Catholics were to avoid the majority of ecumenical prayer and of course, interfaith gatherings.

In the excellent catechetical text, My Catholic Faith: A Manual of Religion, we read:

How does a Catholic sin against faith?

A Catholic sins against faith by infidelity, apostasy, heresy, indifferent to them, and by taking part in non-Catholic worship.

We may lose our faith by: (a) not learning well the doctrines of the church; space (b) willfully doubting trues that have been revealed to the church; (c) reading books and other literature against our religion; space (d) space attending assemblies of people who are opposed to our religion; and space (e) space neglecting the practice of our religion.

Persons who do not believe in Christianity as a divinely revealed religion, whether they have been baptized or not, are commonly referred to as quote infidels”. Infidelity is refusal to believe in anything that cannot be perceived with the senses, or comprehended with the understanding.

But is it not utterly reasonable to have faith in Almighty God Who knows much more than we can ever hope to know and Who can do things beyond our understanding? It is necessary that we serve God in the way He requires, not in the way it pleases us to do so. For this reason we must practice the religion revealed by God, and avoid making up our own religions according to our wins and innumerable fancies. Buddhists, Mohammedans, Hindus, Jews, and pagans, are infidels. As explained, Christians can also become infidels.

Why does a Catholic sin against faith by taking part in non-Catholic worship?

A Catholic sins against faith by taking part in non-Catholic worship, because he thus professes belief in a religion he knows is false.

1.) It is wrong to be present at Protestant or Jewish services even when we do not participate in them, because such services are intended to honor God in a manner he does not wish to be honored in. If he instituted the church of his own he must wish to be honored in the ways of that church. In addition we then give bad example, and expose ourselves to the danger of losing our faith.

When necessary, for social obligations, a Catholic may be present at a non-Catholic wedding or funeral, but he must not participate in the services. In no case may he attend other services of non-Catholic churches, such as the installation of their ministers, sermons, etc.

Now, look again at the picture above. Does Fr. Sosa appear to be “taking part in non-Catholic worship”?

And now the members of his own order see nothing wrong in saying that he has “baptized himself a Buddhist.”

Those of you who’ve been paying attention for a long time will no doubt be able to point to other similar examples in the not-too-distant past, perhaps most notably the so-called “ecumenical” prayer gatherings at Assisi, under the leadership of Pope John Paul II. Converts and those who’ve come recently to study the Church’s traditional teachings may not be aware of these things. For the sake of space, and my own sanity, I won’t begin listing them here. An exhaustive treatment would span many pages.

This kind of thing has to stop. As I’ve written before, as Catholics, we can’t be indifferent to indifferentism. And though we may be tempted to say, “What’s the big deal, this happens all the time now!”, we should resist that temptation. It’s always a big deal. It’s a big deal that we’ve become so cynical that it barely raises an eyebrow these days.

At times like these, I reflexively reach for the Act of Consecration of the Human Race to the Sacred Heart of Jesus (Pope Pius XI), which I’ve shared with you before:

Most sweet Jesus, Redeemer of the human race, look down upon us humbly prostrate before Thine altar. We are Thine, and Thine we wish to be; but, to be more surely united with Thee, behold each one of us freely consecrates himself today to Thy most Sacred Heart.

Many indeed have never known Thee; many too, despising Thy precepts, have rejected Thee. Have mercy on them all, most merciful Jesus, and draw them to Thy sacred Heart. Be Thou King, O Lord, not only of the faithful who have never forsaken Thee, but also of the prodigal children who have abandoned Thee; grant that they may quickly return to Thy Father’s house lest they die of wretchedness and hunger.

Be Thou King of those who are deceived by erroneous opinions, or whom discord keeps aloof, and call them back to the harbor of truth and unity of faith, so that there may be but one flock and one Shepherd.

Be Thou King of all those who are still involved in the darkness of idolatry or of Islamism, and refuse not to draw them into the light and kingdom of God. Turn Thine eyes of mercy towards the children of the race, once Thy chosen people: of old they called down upon themselves the Blood of the Savior; may it now descend upon them a laver of redemption and of life.

Grant, O Lord, to Thy Church assurance of freedom and immunity from harm; give peace and order to all nations, and make the earth resound from pole to pole with one cry: “Praise be to the divine Heart that wrought our salvation; to it be glory and honor for ever.” Amen.

And please pray for Fr. Sosa. He leads the deeply troubled order of which our own pope is a member.

2 Responses to FRANCIS’ FRIEND, FATHER SOSA, GENERAL OF THE JESUITS, “BAPTIZES HIMSELF A BUDDHIST”