THE “PASTORAL” VATICAN II COUNCIL HAS MADE POSSIBLE THE DEVELOPMENT OF DOCTRINE THAT HAS PRODUCED HETERODOXY AND HERESY, UNINTENDED CONSEQUENCES FOR MOST OF THE COUNCIL MEMBERS BUT WHAT WAS HOPED FOR BY THE PROGRESSIVES. 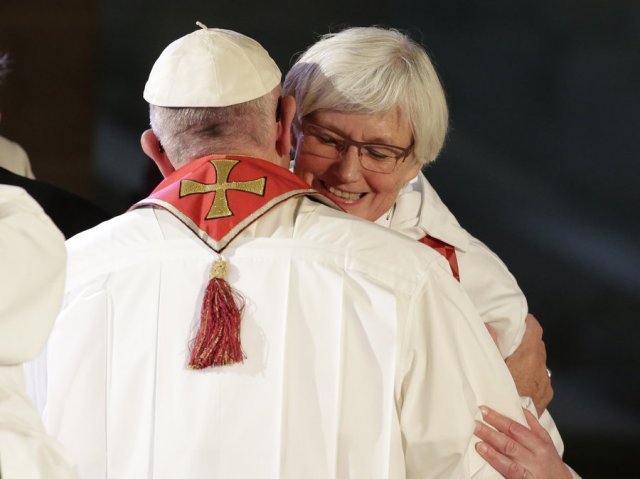 The interpretation of Vatican II and its connection with the current crisis of the Church.

The current situation of the unprecedented crisis of the Church is comparable with the general crisis in the 4th century, when the Arianism had contaminated the overwhelming majority of the episcopacy, taking a dominant position in the life of the Church. We must seek to address this current situation on the one hand with realism and, on the other hand, with a supernatural spirit – with a profound love for the Church, our mother, who is suffering the Passion of Christ because of this tremendous and general doctrinal, liturgical and pastoral confusion.

We must renew our faith in believing that the Church is in the safe hands of Christ, and that He will always intervene to renew the Church in the moments in which the boat of the Church seems to capsize, as it is the obvious case in our days.

As to the attitude towards the Second Vatican Council, we must avoid two extremes: a complete rejection (as do the sedevacantists and a part of the Society of St. Pius X (SSPX) or a “infallibilization” of everything the council spoke.

Vatican II was a legitimate assembly presided by the Popes and we must maintain towards this council a respectful attitude. Nevertheless, this does not mean that we are forbidden to express well-founded doubts or respectful improvement suggestions regarding some specific items, while doing so based on the entire tradition of the Church and on the constant Magisterium.

Those statements of Vatican II which are ambiguous must be read and interpreted according to the statements of the entire Tradition and of the constant Magisterium of the Church.

In case of doubt the statements of the constant Magisterium (the previous councils and the documents of the Popes, whose content demonstrates being a sure and repeated tradition during centuries in the same sense) prevail over those objectively ambiguous or new statements of Vatican II, which difficultly concord with specific statements of the constant and previous Magisterium (e.g. the duty of the state to venerate publicly Christ, the King of all human societies, the true sense of the episcopal collegiality in relation to the Petrine primacy and the universal government of the Church, the noxiousness of all non-Catholic religions and their dangerousness for the eternal salvation of the souls).

Vatican II must be seen and received as it is and as it was really: a primarily pastoral council. This council had not the intention to propose new doctrines or to propose them in a definitive form. In its statements the council confirmed largely the traditional and constant doctrine of the Church.

Some of the new statements of Vatican II (e.g. collegiality, religious liberty, ecumenical and inter-religious dialogue, the attitude towards the world) have not a definitive character, and being apparently or truly non-concordant with the traditional and constant statements of the Magisterium, they must be complemented by more exact explications and by more precise supplements of a doctrinal character. A blind application of the principle of the “hermeneutics of continuity” does not help either, since thereby are created forced interpretations, which are not

convincing and which are not helpful to arrive at a clearer understanding of the immutable truths of the Catholic faith and of its concrete application.

There must be created in the Church a serene climate of a doctrinal discussion regarding those statements of Vatican II which are ambiguous or which have caused erroneous interpretations. In such a doctrinal discussion there is nothing scandalous, but on the contrary, it will be a contribution in order to maintain and explain in a more sure and integral manner the deposit of the immutable faith of the Church.

One must not highlight so much a certain council, absolutizing it or equating it in fact with the oral (Sacred Tradition) or written (Sacred Scripture) Word of God. Vatican II itself said rightly (cf. Dei Verbum, 10), that the Magisterium (Pope, Councils, ordinary and universal Magisterium) is not above the Word of God, but beneath it, subject to it, and being only the servant of it (of the oral Word of God = Sacred Tradition and of the written Word of God = Sacred Scripture).

From an objective point of view, the statements of the Magisterium (Popes and councils) of definitive character, have more value and more weight compared with the statements of pastoral character, which have naturally a changeable and temporary quality depending on historical circumstances or responding to pastoral situations of a certain period of time, as it is the case with the major part of the statements of Vatican II.

The following issues – Our Lady, sanctification of the personal life of the faithful with the sanctification of the world according to the perennial sense of the Church and the primacy of the adoration of God – are the most urgent aspects which have to be lived in our days. Therein Vatican II has a prophetical role which, unfortunately, is not yet realized in a satisfactory manner.

Instead of living these four aspects, a considerable part of the theological and administrative “nomenclature” in the life of the Church promoted for the past 50 years and still promotes

ambiguous doctrinal, pastoral and liturgical issues, distorting thereby the original intention of the Council or abusing its less clear or ambiguous doctrinal statements in order to create another church – a church of a relativistic or Protestant type.

In our days, we are experiencing the culmination of this development.

The problem of the current crisis of the Church consists partly in the fact that some statements of Vatican II – which are objectively ambiguous or those few statements, which are difficultly concordant with the constant magisterial tradition of the Church – have been infallibilisized. In this way, a healthy debate with a necessarily implicit or tacit correction was blocked.

At the same time there was given the incentive in creating theological affirmations in contrast with the perennial tradition (e.g. regarding the new theory of an ordinary double supreme subject of the government of the Church, i.e. the Pope alone and the entire episcopal college together with the Pope, the doctrine of the neutrality of the state towards the public worship, which it must pay to the true God, who is Jesus Christ, the King also of each human and political society, the relativizing of the truth that the Catholic Church is the unique way of salvation, wanted and commanded by God).

We must free ourselves from the chains of the absolutization and of the total infallibilization of Vatican II. We must ask for a climate of a serene and respectful debate out of a sincere love for the Church and for the immutable faith of the Church.

We can see a positive indication in the fact that on August 2, 2012, Pope Benedict XVI wrote a preface to the volume regarding Vatican II in the edition of his Opera omnia. In this preface, Benedict XVI expresses his reservations regarding specific content in the documents Gaudium et spes and Nostra aetate. From the tenor of these words of Benedict XVI one can see that concrete defects in certain sections of the documents are not improvable by the “hermeneutics of the continuity.”

An SSPX, canonically and fully integrated in the life of the Church, could also give a valuable contribution in this debate – as Archbishop Marcel Lefebvre desired. The fully canonical presence of the SSPX in the life of the Church of our days could also help to create a general climate of constructive debate, in order that that, which was believed always, everywhere and by all Catholics for 2,000 years, would be believed in a more clear and in a more sure manner in our days as well, realizing thereby the true pastoral intention of the Fathers of the Second Vatican Council.

The authentic pastoral intention aims towards the eternal salvation of the souls — a salvation which will be achieved only through the proclamation of the entire will of God (cf. Act 20: 27). The ambiguity in the doctrine of the faith and in its concrete application (in the liturgy and in the pastoral life) would menace the eternal salvation of the souls and would be consequently anti- pastoral, since the proclamation of the clarity and of the integrity of the Catholic faith and of its faithful concrete application is the explicit will of God.

Only the perfect obedience to the will of God — Who revealed us through Christ the Incarnate Word and through the Apostles the true faith, the faith interpreted and practiced constantly in the same sense by the Magisterium of the Church – will bring the salvation of souls.

+ Athanasius Schneider,
Auxiliary Bishop of the Archdiocese of Maria Santissima in Astana, Kazakhstan

1 Response to THE “PASTORAL” VATICAN II COUNCIL HAS MADE POSSIBLE THE DEVELOPMENT OF DOCTRINE THAT HAS PRODUCED HETERODOXY AND HERESY, UNINTENDED CONSEQUENCES FOR MOST OF THE COUNCIL MEMBERS BUT WHAT WAS HOPED FOR BY THE PROGRESSIVES.