WHEN IS A PATIENT REALLY DEAD???? 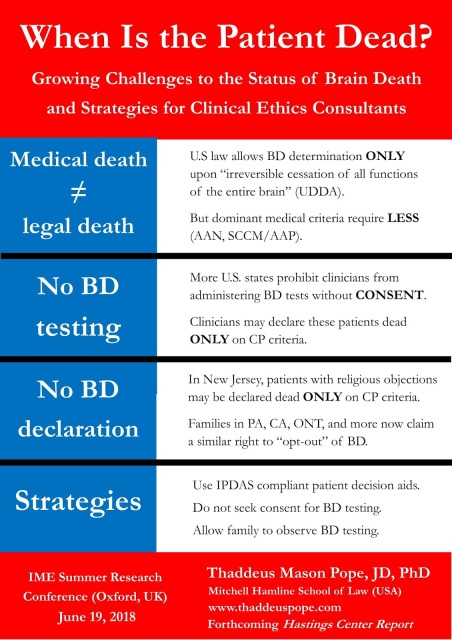 DEATH is the total permanent loss of circulation of blood leading to the cessation of vital functions dependent on such circulation such as pulsation, respiration, brain activity leading in turn to the destruction of these vital systems and organs necessary for the preservation of human life.  Death is not an instantaneous phenomenon, it is a process.
PROCESS means the successive occurrence in time of the physiological changes named above in parts of the human body.
CHANGES described above causing death can be measured in nano-seconds, seconds, minutes, hours, days, weeks or longer.

Words are signs to which society, by common consent, assigns meaning.  When people are consumed with a desire to promote some political, social or economic agenda they assign meaning to words that the great majority of other persons in the same society reject.

Such is the case with death.

To persons with a Malthusian or racist obsession, death is not longer a word describing a natural event.  It is a political or social or economic means to an end and natural death becomes irrelevant if hastening or causing the death of another person promotes some arbitrary good such as alleviating suffering, reducing world population, eliminating undesirable individuals or groups from society.

Since Doctor Christiaan Barnard in 1967 first successfully transplanted a human heart, the medical profession has ceased to be a profession and has become an industry.  The transplantation of organs from the human body of one person to the body of another person has become BIG BUSINESS.

The problem faced by the medical industry was the problem of death.  It is not possible to successsfully transplant human organs from a cadaver to a living person.  In order to transplant organs successfully they must be taken from the body of a living  person and transferred to the body of another living person and that procedure was illegal in practically every country in the western world up until the 21st Century.

How to solve that problem if the medical business was to reap the potential huge financial rewards of organ transplantation.  Simple.  Change the definition of death in the law.

A group of doctors met at Harvard University in 1972 and came up with the idea of defining death solely on the basis of the activity in the human brain.  Their proposal has come to be known as brain death.  Subsequent to the Harvard meeting the law was changed in all 50 states of the United States.  Now, the absence of the signs of brain activity in certain parts of the brain allows doctors to declare a patient “brain dead” and they can leglly proceed to extract all the organs of the patient for transplantation into another person even though blood is still coursing through the veins and arteries of the patient and with the aid of a ventilator pushing air into the lungs of the patient (the body of the patient will reflexively push the air out of the lungs) while the other organs are being removed.

Voila, the medical business now can remove the organs of everyone who enters a hospital as a patient.  All that is necessary is that the doctors induce coma.

Words are symbols with meaning.  We must fight to have the law in every state redefine death using the words I have written at the beginning of this post.

The Catholic Church is not opposed to organ transplantation, but insists that persons must not be harmed, much less killed, in order to procure organs for transplantation.  Here are some magisterial statements on the subject.

Pope John Paul II to the Participants of the 1989 Pontifical Academy of Sciences stated:

“The problem of the moment of death has serious implications at the practical level, and this aspect is also of great interest to the Church. In practice, there seems to arise a tragic dilemma. On the one hand there is the urgent need to find replacement organs for sick people who would otherwise die or at least would not recover. In other words, it is conceivable that in order to escape certain and imminent death a patient may need to receive an organ which could be provided by another patient, who may be lying next to him in hospital, but about whose death there still remains some doubt. Consequently, in the process there arises the danger of terminating a human life, of definitively disrupting the psychosomatic unity of a person. More precisely, there is a real possibility that the life whose continuation is made unsustainable by the removal of a vital organ may be that of a living person, whereas the respect due to human life absolutely prohibits the direct and positive sacrifice of that life, even though it may be for the benefit of another human being who might be felt to be entitled to preference.”9

“Death can mean decomposition, disintegration, a separation (cf. Salvifici Doloris, n. 15; Gaudium et Spes, n. 18). It occurs when the spiritual principle which ensures the unity of the individual can no longer exercise its functions in and upon the organism, whose elements left to themselves, disintegrate.”10

“Nor can we remain silent in the face of other more furtive, but no less serious and real, forms of euthanasia. These could occur for example when, in order to increase the availability of organs for transplants, organs are removed without respecting objective and adequate criteria which verify the death of the donor.”11

Incredibly, some jurisdictions are moving to make the donation of organs automatic, that is, there is a presumption in law that a person is willing to have his organs removed for transplantation.  Truly, we are rapidly moving into a dystopian future.

1 Response to WHEN IS A PATIENT REALLY DEAD????