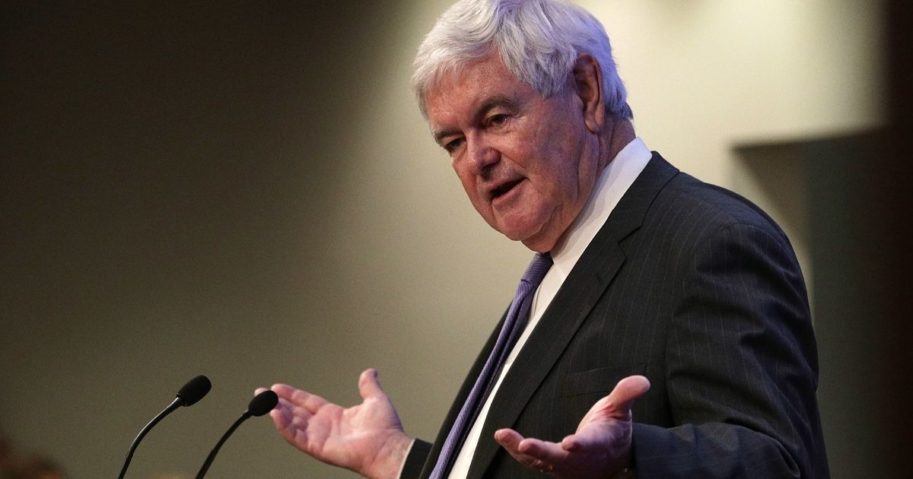 Leftists in the government, the establishment media and Big Tech are often criticized for their extreme notions of censorship against “hate speech,” which usually refers discomforting words or ideas they disagree with.

The political right would call anyone who supports silencing another’s speech “un-American,” citing our constitutional right to freedom of speech and proclaiming its fundamental importance in obtaining truth.

He said one name: George Soros.

Gingrich was attributing the ever-growing rate of crime in Democrat-run cities to the installation of district attorneys who have allegedly been financed by Soros.

In closing his discussion with “Outnumbered” host Harris Faulkner, Gingrich was allowed his final thought.

“Look, the number-one problem in almost all these cities is George Soros-elected, left-wing, anti-police, pro-criminal district attorneys who refuse to keep people locked up,” he said.

“Just yesterday they put somebody back on the streets who’s wanted for two different murders in New York City.”

Gingrich then criticized Joe Biden and Kamala Harris for their endorsement of said problematic attorneys.

“You cannot solve this problem, and both Harris and Biden have talked very proudly out what they call ‘progressive district attorneys,’” he argued.

That is when things got awkward.

Finalizing his thoughts, Gingrich said, “They’re a major cause of the violence we’re seeing because they keep putting the violent criminals back on the street.”

“I’m not sure we need to bring George Soros into this,” commentator Melissa Francis responded.

Faulkner was visibly caught off-guard by the interjection.

“He paid for it,” Gingrich rebutted. “I mean, why can’t we discuss the fact that millions of dollars–”

Immediately another Fox News commentator, Marie Harf, cut in: “No, he didn’t. I agree with Melissa. George Soros doesn’t need to be a part of this conversation.”

The program was completely silent as the camera rested on Harf for an odd moment before switching back to Faulkner, who also sat in hesitant silence.

The program continued in the most pregnant on-air pause I’ve ever seen on Fox before Faulkner gave her closer for the segment.

Francis and Harf didn’t respond to his claims with counter-evidence; they simply pounded the table with their own preferred perspective on Soros, as if to correct Gingrich.

Breitbart has reported on Soros’ history funding DAs throughout the nation with a goal “to defeat ‘law-and-order’ candidates and elect ‘progressive’ prosecutors.”

Among these prosecutors, according to Breitbart, are “Kim Foxx, the Chicago-area prosecutor who mishandled the Jussie Smollet hate crime hoax; Kim Garnder, the St. Louis prosecutor who charged the McCloskeys after they defended their home from a Black Lives Matter mob by standing outside with their guns; and Diana Becton, who has charged a California couple with a hate crime for painting over a ‘Black Lives Matter’ mural on a public road.”Should anyone’s name be off limits in public discourse?Yes No  Completing this poll entitles you to The Western Journal news updates free of charge. You may opt out at anytime. You also agree to our Privacy Policy and Terms of Use.

Given the context of Soros’ intimate relationship with leftist extremism, why does it seem like Fox News commentators are at his defense? Or at least silencing discussion about him?

Faulkner apologized Thursday, saying the interruptions of Gingrich were “not ideal” and that he should’ve been allowed to express himself without interruption.

“Do we debate with fire here? Yes. But we must also give each other the space to express ourselves,” she said.https://platform.twitter.com/embed/index.html?creatorScreenName=WestJournalism&dnt=true&embedId=twitter-widget-1&frame=false&hideCard=false&hideThread=false&id=1306714177772417031&lang=en&origin=https%3A%2F%2Fwww.westernjournal.com%2Fbetrayal-fox-news-cuts-off-newt-gingrich-linking-george-soros-race-riots%2F&siteScreenName=WestJournalism&theme=light&widgetsVersion=219d021%3A1598982042171&width=550px

This moment won’t bode well for Fox News with viewers who are aware of Soros’ apparently significant financial influence in America’s political landscape.

Such censorship is unbecoming of journalists and only garners suspicion that will ultimately discredit the service they purport to provide trusting Americans.