President Joe Biden on Wednesday blasted Texas’s abortion law, which went into effect on Wednesday, promising to “protect and defend” the right to abortion.

“Today, Texas law SB8 went into effect. This extreme Texas law blatantly violates the constitutional right established under Roe v. Wade and upheld as precedent for nearly half a century,” Biden said in a statement released by the White House:

The Texas law will significantly impair women’s access to the health care they need, particularly for communities of color and individuals with low incomes. And, outrageously, it deputizes private citizens to bring lawsuits against anyone who they believe has helped another person get an abortion, which might even include family members, health care workers, front desk staff at a health care clinic, or strangers with no connection to the individual.

“My administration is deeply committed to the constitutional right established in Roe v. Wade nearly five decades ago and will protect and defend that right,” he added. 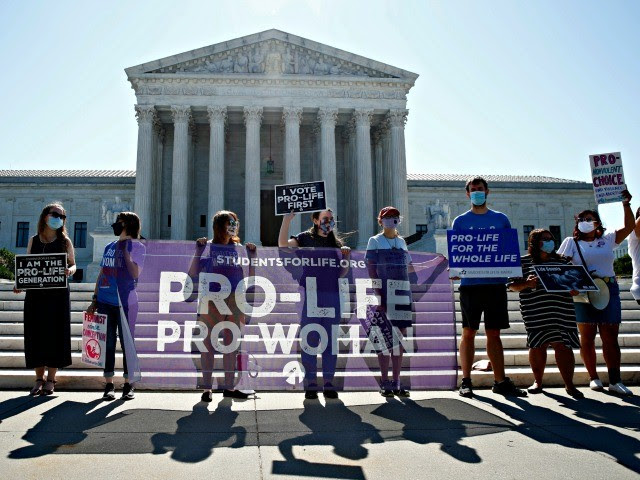 On Wednesday, Texas became the first state in the nation to ban abortion after a fetal heartbeat is detected. As Breitbart News reported, abortion providers “applied to the U.S. Supreme Court for an injunction, but the Court has not yet ruled on the matter – though could do so at any time – and the law, as passed by the Texas legislature and signed into law by Gov. Greg Abbott (R), is now in effect”:

However, for major matters like this, standard procedure is for the justice supervising the relevant appeals court – in this case, the U.S. Court of Appeals for the Fifth Circuit – to refer the application to his eight colleagues for the full Supreme Court to vote on the matter.

The abortion providers’ appeal comes after their hopes to block the law were thwarted over the weekend when the Fifth Circuit canceled a hearing initially planned for Monday. The district judge was blocked from granting a preliminary injunction before September 1.

Other Democrat lawmakers have reacted similar to Biden, accusing the Lone Star State of taking away “reproductive rights” from women.

“States like Texas have doubled down on their efforts to strip away reproductive rights. I told @TeenVogue: Congress needs to show more courage, step up and protect access to abortion,” Sen. Elizabeth Warren (D-MA) said. “And if we need to get rid of the filibuster to do it, so be it.”