IF THIS DOES NOT SHAKE YOUR COMPLACENCY NOTHING WILL!!!!!!

What The Q Is Going On In Our World?

There has been quite a storm in the media about the mysterious movement called ‘Q’. Who, or what is this notorious Q? Is it a bad psyop to deceive good people? Or is it a good operation to take down the bad guys? What is truth, and what is fiction?A good way to know if something is good or bad, is to look at what the mainstream media says about it. Since they are entirely controlled by the wicked (= Cabal, Deep State, NWO, etc), who use it to manipulate the minds of mankind, we can know exactly who their enemies… and friends are. Here is the key: their friends will always be praised, protected, and positively presented. The enemies of the wicked however… will always be smeared, silenced, and suppressed by the mainstream media. This golden rule helps you discern who is who in the world of deception.
The mainstream media is the nr one tool of the wicked to lie to humanity, control what we believe, and direct the course of our existence. Near the end of 2020 the mainstream media exploded in an all-out witch-hunt against Q, discrediting them in every possible way. Most Q platforms were deleted, anyone talking about them got censored, and thousands of social media accounts of Q followers were cancelled. An example: yesterday I posted a short comment about Q on Facebook, and immediately I was blocked for three days.That’s how scared they are of somebody saying something about Q… THE WICKED ARE TERRIFIEDThis massive attack on Q shows one thing: those who own the mainstream media, are terrified of Q.
What does that tell us?

So what is Q? It is an anonymous group of top level military intelligence patriots, who are exposing the widespread corruption in the U.S. government, Big Media, Big Pharma, Big Tech, and basically in every aspect of our society. This exposing is done on platforms like Qalerts.pub.

Q’s main mission is to awaken the ignorant public to what is going on behind the scenes of the media theatre. All mainstream media and goverment entities are given a strict narrativewhich they have to present to the public. That way the wicked can manipulate the minds of the masses. Their greatest fear is that the public would wake up from this deception, and start thinking for themselves. Therefore Q encourages people all over the world to do research, and spread the actual facts about what is going on. Q calls these investigators ‘citizen journalists’, ‘digital soldiers’ or ‘midnight riders’.

Below you can see an example of a ‘Q Drop’…

Your ability to spread information across the digital battlefield and bypass their control is what they fear [narrative failure] and why they are doing everything in their power to disrupt [false labeling [daily attack], censorship, termination, gov hearings > foundation to term/censor, etc].

Q raised up a worldwide army of ‘Midnight Riders’. According to Webster Dictionary a Midnight Rider is a member of a secret band who rides masked at night, doing acts of violence for the purpose of punishing or terrorizing evil. The ‘violence’ in this case, is truth that tears down the lies of the media.

Q explained that once the general public has reached a certain level of awakening, they can move to the next phase of their plan: take down the international network of corruption, that is present in every high position of our world.

More about Q can be seen in the following documentary…

THE FOLLOWING VIDEO EXPLAINS Q
– A MUST SEE! –https://rumble.com/embed/v8r2yj/?pub=6lp0nQ Exposes Pure Evil
Q revealed that the richest entities in the world, like the Rothschilds, Rockefellers, Gates, Soros, the Saoudi Arabian royal family, and royalty in nations around the world, have become so extremely evil, that they need to be stopped… or the world will be destroyed by them.

The following illustrates the sheer level of wickedness of those who rule the world, with their trillions of dollars… On December 12th 1972 Marie-Hélène de Rothschild held a Surrealist Ball at Château de Ferrières, one of the family’s gigantic mansions. While these events are usually extremely secretive, photographs of this particular Ball surfaced on the web.

Here you see the Rothschild hosts welcoming the wealthy elite. The lady wears the head of a horned animal, the symbol of satanism. Their diner tables were dressed up with dismembered baby dolls, and cracked baby skulls… Other tables had naked mannequin cadavers… 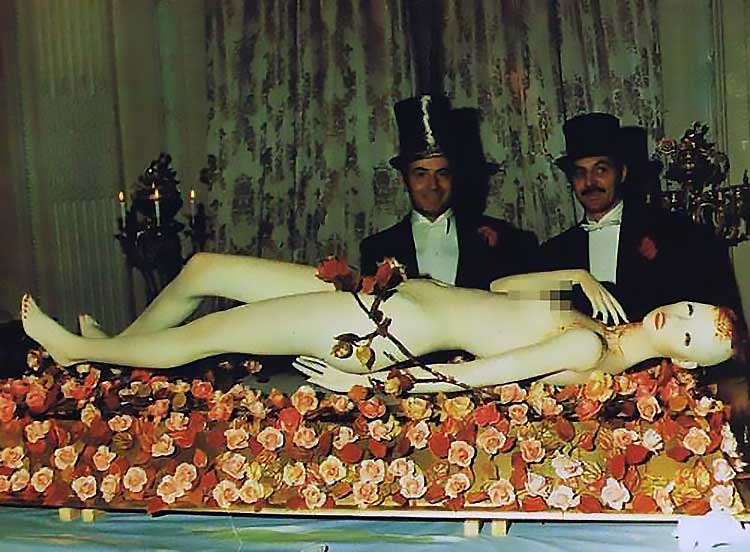 This elite bal represented something nefarious, which is a hallmark of these evil people: human sacrifice. This was not the only time their secret parties were accidentally exposed to the world. Similar photos showed up from high profile Hollywood parties, where celebrities feast on tables adorned with human bodies. These hideous displays at the parties of the world’s wealthiest, reveal something appaling: these people celebrate human sacrifice, and cannibalism. It gets even worse: Q and many other truth speakers in our times, have revealed that the elite of the world are deeply involved in ritual child sacrifice.

Patriot –
A little perspective…
Patriots are dying to defend this great country and the FREEDOM she provides.

Children are being kidnapped, tortured, raped, and sacrificed in the name of pure evil.

Stay the course.
We are FIGHTING a deeply entrenched enemy.
Think LISA BARSOOMIAN (Smile).
2018 WILL BE GLORIOUS.
Q

Child sacrifice is the hallmark of the highest level of evil in the world. This practice goes back thousands of years, to many ancient cultures.

1 Response to IF THIS DOES NOT SHAKE YOUR COMPLACENCY NOTHING WILL!!!!!!