After raid heard ’round the world, the choice is between Constitutionalism and de facto Communism 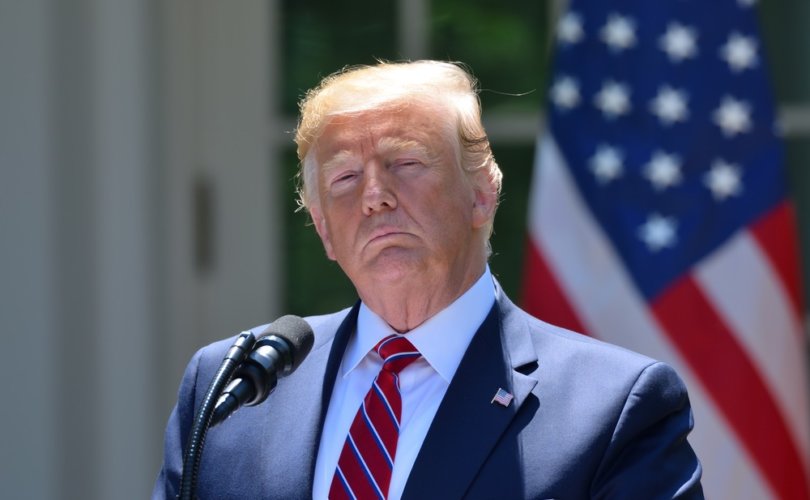 Listen to this article

(Population Research Institute) — When the Biden administration’s private police force, formerly known as the FBI, raided Donald Trump’s home yesterday, my first reaction was shock. My second was — and this may surprise you — relief that the other side has finally, unmistakably, shown its hand.

As soon as Trump announced his campaign for the presidency on June 16, 2015, he was surreptitiously targeted for destruction by the Democrats and their Deep State allies at the FBI, CIA, and DOJ. But neither the Russian Collusion Hoax, nor three failed impeachment efforts, nor a stolen election, nor the farcical January 6th commission has to date stopped the leader of the MAGA movement. So desperate to stop Trump from running again, determined to decapitate the movement that he led, they have come out of the shadows.

In doing so, the people who currently control the levers of power in Washington could not — short of assassinating the former President — have made their distain for the Constitution and the rule of law any clearer.

It goes without saying that there is no historical precedent, at least in American history, for such actions.  Despite the bitter political feud between Thomas Jefferson and John Adams, neither sought to use the powers of their office while president to defame or frame the other. So it has been down through the past two-and-a-half centuries — until now.

Tens of millions of Americans now know, if they didn’t before, that the gloves are off, and that the mailed fist will be the response of the authoritarian state to any serious challenge to its authority. If Joe Biden, Merrick Garland, Christopher Wray and their henchmen can raid Trump’s home on some pretext, seize everything that isn’t nailed down, and even break into his personal safe (which was empty), then no one is safe from these new tyrants.

7569 have signed the petition.

Keep me updated via email on this petition and related issues. Sign this Petition

A lot of people have called the raid a “Banana Republic” tactic, but I believe the matter is far more serious than that. The parallel I see is with the behavior of the Chinese Communist Party and its leaders.

Take China’s current leader, Xi Jinping, for example. As soon as he took over the CCP in 2012, Xi began moving against his political enemies. But rather than simply having these officials arrested, he would first send in Party investigators who had been instructed to look for evidence of “corrupt activities.”

Since all senior CCP officials — without exception — engage in corrupt business dealings, it was easy for the investigators to dig up enough dirt to make such a case. “Corruption” became the pretext that Xi used to first disgrace, then arrest, and finally imprison members of the CCP’s Central Committee who were a threat to his continued rule.

As the Chinese saying goes, “If you want to find someone guilty, you will not lack evidence.”

The Democrats have been trying to find Trump guilty of something, anything, for the past seven years. Increasingly desperate to remove him from the political chessboard, they have nevertheless failed again and again. This final effort to ransack his personal residence was supposedly predicated on his mishandling of secret documents. But the President is the ultimate authority on classification, has a secure facility at Mar-a-Lago and, according to his attorney, has been working harmoniously with the National Archives to make sure that everything is properly preserved.

It’s worth remembering, too, that the FBI did not raid former Secretary of State Hillary Clinton’s home for her personal server and electronic devices. Nor did the DOJ charge her for deleting 33,000 emails, many of which were highly classified. In fact, there were no consequences whatsoever for the lifelong Democrat.

SUBSCRIBE TO OUR DAILY HEADLINES US Canada World Catholic

The real reason why Trump’s home was raided must lie elsewhere. Could it be that the FBI and its political handlers, who tried and failed to destroy Trump with the Russian Collusion Hoax, were simply looking for any dirt on him they could possibly find? That would certainly explain why, after their smash and grab operation, they reportedly hauled away 15 boxes of materials without even going through them first.

What the raid made clear is that the few in Washington — call them fascists, socialists, communists, or what you will — intend to deceive and dominate the rest of America for a long time to come. And that, instead of a handful of rogue FBI and DOJ officials, we are dealing with a cancer that has metastasized throughout both agencies, and perhaps others.

It represents an abuse of power so over the top that it seems deliberate, perhaps intended to break our spirit by showing us who really runs the country (not us). Or perhaps it was intended to provoke a response that, like the flash bangs and pepper balls fired into a peaceful crowd on January 6th, would be used to paint all conservatives as “domestic terrorists.”

The first thing we have to do in response is storm the polls in November. We must win by such a margin that, stuff as many ballot boxes as they might, the other side is loses bigly. We need a decisive majority in the House and control of the Senate to keep the current madness in check.

The second thing that we must do is support Trump when he announces that he is running — again — for president.  That day must come soon, because he is the only battle-tested, battle-ready candidate we have. After seven years on the firing line, he not only knows where in the Swamp the enemy is hiding, but understands what it will take to dig them out, root and branch.

And remember all the while that you are not doing this for Donald Trump, but for your children and grandchildren. As Newt Gingrich said yesterday, “If 30 FBI agents can take over the house of a former President of the United States and probable candidate for President, what can they do to you? … ”I think it’s a very scary step towards a police state, and eliminating the Constitution as a real document.”

Steven W. Mosher is the author of The Politically Incorrect Guide to Pandemics, newly published by Regnery, and the president of the Population Research Institute.

Steven Mosher is an internationally recognised authority on China and population issues as well as an acclaimed author and speaker and founder and head of the Population Research Institute. He was the first American social scientist to visit mainland China in 1979 where he witnessed women being forced to have abortion under the new “one-child-policy” which he then exposed to the world. Mr. Mosher was a pro-choice atheist at the time, but witnessing these traumatic abortions led him to reconsider his convictions and to eventually become a practicing, pro-life Roman Catholic.

Mosher has appeared numerous times before the US Congress as an expert in world population, China and human Rights abuses. He has also made TV appearances on Good Morning America, 60 Minutes, The Today Show, 20/20, FOX and CNN news, as well as being a regular guest on talk radio shows across the nation.

He is the author of the best-selling A Mother’s Ordeal: One woman’s Fight Against China’s One-Child-Policy. His latest book is Bully of Asia, exposing the threat of China to the entire world at this time.

Steven Mosher lives in Virginia with his wife, Vera, and their nine children.