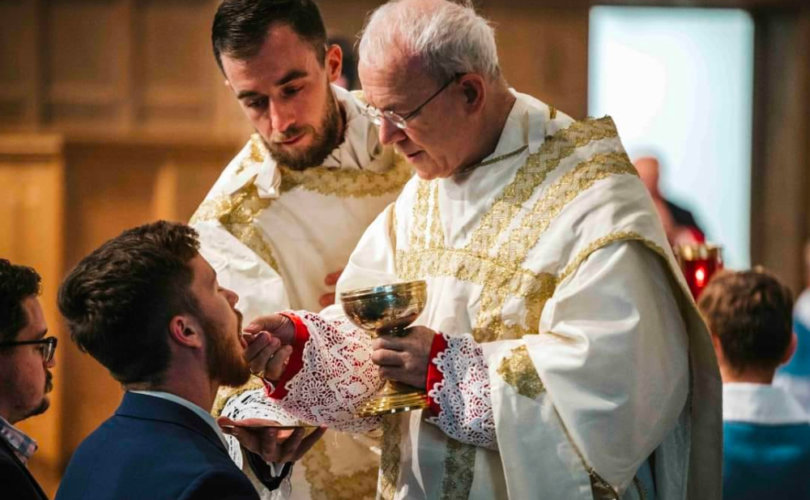 (LifeSiteNews) – On October 18, Bishop Athanasius Schneider will speak at an eventhosted by Sophia Institute Press, in Virginia near Washington, D.C. Together with Dr. Peter Kwasniewski and Diane Montagna, he will discuss his new book The Catholic Mass (published by Sophia Institute Press), which is a defense of the traditional Latin Mass and its God-centered spirituality.

There are numerous reasons why I would urge Catholics not only to try to come to that event, but also to read His Excellency’s new book.

First of all, I consider Bishop Schneider to be one of the holiest and most courageous prelates we currently have in the Catholic Church. Everybody who has been blessed to meet him in person and to spend time with him will have noticed his utmost pastoral nature.

He is, first and foremost, a priest. A priest who is always open to requests for baptisms, sick calls and for pastoral counsel and care. Bishop Schneider is a man who distributes blessings wherever he goes, whether by car or on foot.

I remember one time, when he was to bring the Holy Eucharist to a sick person in town, he carried the Host down the aisle in the church, bestowing a Eucharistic blessing on each and every one who happened to be in church or arriving outside. Bishop Schneider is truly a Christ-bearer. Just recently, when talking about him with a lady who also knows him, we noticed how over the years this bishop has increasingly become more and more like Christ. I wish everyone of our readers to be blessed to meet Bishop Schneider in person.

But recently, our family also had a more painful experience. When our children recently traveled out of state for a weekend, they went to a Novus Ordo Mass, which they barely do. They were so shocked about what they saw that they had to tell us everything in detail when they returned home. Our daughter Isabella even told us that she had to leave the church at some point and had tears in her eyes, in light of the irreverence of the priest and the congregation. There were barely any genuflections during Mass; the priest greeted the congregation at the beginning and asked them questions which they answered.

As our son Robby related, at the end of Mass, the priest leaned on the altar (table) as if it was a kitchen table, telling his audience a joke. The final blessing was so fast, one could not even get on one’s knees to receive it reverently. Not to mention how the priest handled the Holy Eucharist and its Particles that were on his hands: he rubbed them off on his vestments! These things are so painful to those who believe in the Real Presence, because all of this conduct and these gestures reveal a lack of reverence toward God Himself, Who died for us on the Cross to redeem us.

After this painful experience of our children and in preparation for this essay, I returned to reading Bishop Schneider’s new book The Catholic Mass: Steps to Restore the Centrality of God in the Liturgy, and it is like a cold glass of water in the midst of a desert.

Chapter by chapter, Bishop Schneider explains the nature of Holy Mass and why and how it is celebrated in the traditional way. He tells us about the Mass as “Prayer,” “Adoration,” “Ritual,” and as “Sacrifice” and “Salvation’s Source,” to name only a few explanations of the Mass. Everybody reading this book will deepen his faith in the Holy Sacrifice of the Mass and will return to it with more awe and reverence (or with more indignation, should the Mass he attends be unworthy of God). And it will also foster our determination to remain loyal to the traditional Latin Mass and the traditional Sacraments, at all costs. This ancient rite is worth fighting for.

In this new book, the auxiliar bishop of Astana, Kazakhstan also enters into the discussion about the defects of the Novus Ordo Mass, and his words very well explain how we could come to the point in Church history where children, like the Hickson children, have to come home heart-broken from a Novus Ordo Mass somewhere in America.

As my husband Robert always stresses to our children, the Holy Mass is most of all a sacrifice, and he likes to call it the Holy Sacrifice of the Mass, which immediately highlights this aspect.

Bishop Schneider begins his chapter on “The Mass Is Sacrifice” with the sentence: “The Holy Mass is the Sacramentum Crucis, the Sacrament of the Cross: this is its essential definition.” And a little later he adds that the Holy Mass “is the sacramental form of the sacrifice of Golgotha.” And since “this act of sacrifice is the greatest act that has ever taken place or will ever take place in human history,” every aspect of the Mass deserves utmost reverence and attention, both from the priest and from the congregation.

From this one tenet, everything flows. It flows that we bow our heads, that we kneel during the Consecration, that we sing to God and say prayers of thanksgiving and of praise. We thank God for having saved us from damnation and for continuously giving us His Grace to lift up our wounded human nature toward Him, unto eternal salvation.

It is this love and gratitude for this Divine Love, as expressed by Christ laying down His Life for us – and by God the Father sacrificing His Only Son – that makes us want to defend the ancient rite, the Mass of all ages and the traditional Sacraments.

This becomes also clear when reading Bishop Schneider’s book. Our resistance flows out of a deep affirmation and gratitude.

READ: Bp. Schneider: Pope’s ‘persecution’ of the Latin Mass an ‘abuse of power’ which must be resisted

The bishop of German descent explains the different aspects of the Mass as a sacrifice, especially that Christ offers Himself again in an unbloody manner, as a “victim to the Eternal Father” (Pope Pius XII), as well as that the Mass is an expansion of the one Sacrifice that took place on Calvary, with Christ’s giving again and again His Body and Blood for us. Schneider says that the “sacrifice of the Cross speaks to us of the most fruitful love, and its fruits are infinite because they are borne by a Divine Person.”

By way of sacrificing His Life for us, Christ showed His Love for us – He proved it.

That is why the aspect of the sacrifice is so important. Yet, as Bishop Schneider shows us, “it is an obvious fact that the dimension of sacrifice is diminished in the Novus Ordo Missae.” He also points out how Protestants have been “consultors in its drafting” and that later Protestant congregations were saying that they could easily attend that new Mass, since, in the words of one such Protestant congregation, “many obstacles that could prevent a Protestant from participating in a Eucharistic celebration seem to have disappeared.”

Further explaining what was changed in the Novus Ordo Missae, the Kazakh prelate says that this Mass “weakens the essential, sacrifical aspect” as it can be seen “in the new Offertory Prayers, which are essentially prayers for the blessing of a meal, emptied of their properly sacrificial meaning.”

It is worth quoting Bishop Schneider here some more: “The Offertory is meant to point to the Cross, so the Church expresses in a solemn and somewhat drawn-out manner the intentio, i.e., what she intends to do, which is not to carry out a simple meal, but the greatest action, which is the sacrifice of Christ.” Thus, the Novus Ordo Offertory Prayers are in his view “dogmatically, doctrinally, and spiritually defective and should be replaced by the ancient prayers.”

Bishop Schneider even goes so far as to issue a warning. By expressing “such a limited intention,” the Novus Ordo Offertory Prayers are “theologically ambiguous” and “fail to recall” what the Council of Trent stated, namely: “If anyone says that in the Mass a true and real sacrifice is not offered to God; or that to be offered is nothing else than that Christ is given to us to eat, let him be anathama.”

The Kazakh prelate then goes on to say that the Eucharistic Prayer II of the Novus Ordo“almost entirely” lacks the “sense of sacrifice.” The consequence of such prayers is that even priests lose the sense of the nature of the Mass. States the bishop:

Were we to survey the clergy, we might be surprised to learn that many now consider the Mass to be merely a banquet. This Protestantizing tendency is very dangerous and cannot be denied.

Here comes to mind once more the priest whom the Hickson children just witnessed at a Novus Ordo Mass during their vacation.

I hope that many of our readers will be able to attend the event with Bishop Athanasius Schneider on October 18. May he continue to spread his blessing wherever he goes, and may he continue to enlighten Catholics about the current errors that have crept into the Church and to encourage a holy resistance, at the same time raising the hope that God one day will restore the Church in her ancient beauty again.