POLST CAN BE DANGEROUS TO YOUR LIFE 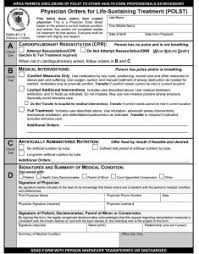 It’s normal to want to trust your doctor’s advice, to heed his every word when it comes to your own care, or the care of a loved one. You know he has taken the Hippocratic Oath and you believe he has your best interests at heart. But is that always the case? What happens when you have a serious or terminal illness? Will he still give you the care that everyone deserves? When it comes to POLST forms, education is key.

Physician Orders for Life-Sustaining Treatment (POLST) is “a standard document that, when signed by a designated healthcare professional, dictates whether to withhold or administer certain forms of medical treatment and/or care. POLST is known by different acronyms in various states (MOST, MOLST, POST, etc.). . . . A brightly colored form that is very visible in a patient’s medical chart, POLST has boxes to check off indicating that a patient does or does not want cardiopulmonary resuscitation (CPR), antibiotics, nutrition and hydration, etc.”

At first blush, this document and the promotion of it sound very much like something that is patient-friendly and helpful when a major illness occurs and immediate steps must be taken to ensure proper care. But if one scratches beneath the surface, a POLST form in the wrong hands has a dark side that must not be ignored.

One POLST advocate who speaks about the form and its good points is Dr. Susan Tolle, director of the Center for Ethics in Health Care at Oregon Health and Science University.

“The POLST program has helped people get their wishes respected,” Tolle explained, of a chart showing POLST-enrolled citizens at a lower number of hospital visits than those with a “do not resuscitate” form or no form at all. . . .

People with POLST were hospitalized less often, she continued, “That’s when a lot of other people began expressing interest, but that’s also when I began getting a lot more phone calls from Washington, D.C., saying, ‘Exactly how much does this program save? Can you tell us about the cost savings and POLST?'”

They also asked about any incentives to promote the program and whether any were in place.

“You began to get a sense that they were much more interested in cost savings [than] they were in whether or not somebody’s wishes were carefully . . . recorded and respected. So that began to make me very nervous, and we have not made any kinds of costs estimates and savings projections for fear they would be very much misused. And (the) data suggests it would be a lot of money.”

Curious, isn’t it, that the topic of cost-savings would come up? We found it particularly strange that Tolle would let people know that, while she was concerned about the questions being asked, she wanted the audience to be assured that indeed money would be saved.

Perhaps her remarks are not all odd if we scratch beneath the surface and understand POLST in the broader context of healthcare rationing, palliative care, and active euthanasia. After all, they are all twigs from the same branch of the tree of evil that Pope John Paul II called the culture of death.

The Belbury Review blog recites the history of POLST and healthcare rationing: “POLST owes its existence more to Oregon’s experiment with healthcare rationing than it does to the state’s assisted suicide experiment. In fact, POLST grew out of an effort in the late 1980s by Portland area hospital ethics committees (not patients) who were considering how to limit ‘futile treatments.’ Eventually ethicists came up with a document that would discourage providers and patients from requesting treatments that were ‘not medically indicated’ – i.e., treatments not considered appropriate by a panel of ‘experts.'”

In other words, POLST can be another way of signing your own death warrant!

On the palliative care front, medical professionals tell us that one of the tools in a successful palliative care program is the POLST form, saying POLST can transform a patient’s wishes into physician action. The article notes that, for the patient confronting a terminal illness with little time remaining, POLST can be indispensible.

The caveat in this case is that there is a very fine line between managing a patient’s pain in an ethical manner and hastening the patient’s death. Either avenue could be taken when a POLST form exists.

POLST is no different than any other end-of-life care form, signed by someone who has the best intentions for his care being given in accord with natural law ethics, but overseen by another individual whose perspective is driven by motives that are not at all wholesome.

2 Responses to POLST CAN BE DANGEROUS TO YOUR LIFE