IS IT ANY WONDER THE LAITY ARE CONFUSED? 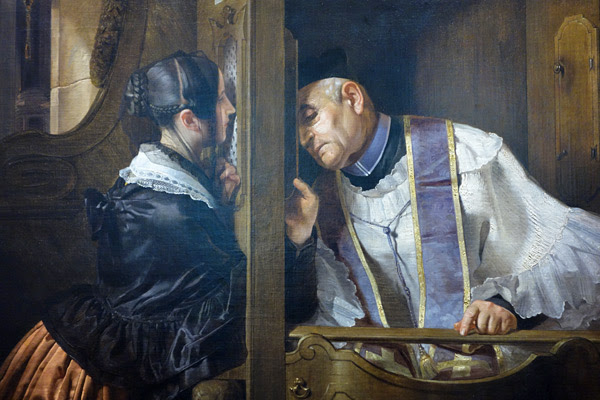 THE CATHOLIC THING
[Emphasis in BOLDFACE by Abyssum]

A friend wrote recently that he was puzzled by the effort of certain prelates to change Church teaching about the divorced and civilly remarried at the recent Synod. He observed that the proposed solution seems rather unnecessary since the discipline about receiving Communion is already widely ignored both here and abroad. In the rather subjective and lax approach to such questions, most divorced and civilly remarried people are hardly likely to observe Church discipline when they have already rejected the doctrine upon which it is based. If they want to go to Communion, it’s very unlikely that they will seek anyone’s permission.  [But changing doctrine will falsely ease their conscience – Abyssum]

In Italy, an undercover female journalist recently violated the sanctity of the confessional to get material for an article she was writing on this precise question. The reaction has been rather enlightening. She went to confession and sought advice about whether she, as a divorced and civilly remarried Catholic, could receive Communion – a ploy to see if confessional practice was keeping pace with the enlightened movement among the progressive bishops.

The confessor had some interesting bits of advice. The fundamental advice was based upon a radical [and false – Abyssum] notion of private conscience: he simply told her to follow her own conscience. [One can only safely follow an informed/formed conscience – Abyssum]  In other words, if she was subjectively convinced that her second marriage was a true marriage, in spite of Church teaching, she should receive Communion, since her conscience is telling her that she is not in a state of sin.

He also advised her that she might also consider changing her parish, so as to avoid scandal (which indicates that the priest was quite aware of Church teaching, as are many of the parishioners in his parish). And then he encouraged her to seek an annulment, but one has to wonder why, if she is convinced in conscience that she is truly married and has a right to the sacraments. Why bother?

This confessor then tries to excuse himself and perhaps soothe his own conscience when he goes on to “advise” the woman, “I am telling you what the Church is asking, but at the end it is you who must make a choice. . . .It’s clear that from my position, I will never tell you that you can take the communion, as long as the Church recognizes only one matrimony. But I will never tell you either that you cannot take it.”  [Incredible! – Abyssum]

In all, a rather pathetic dereliction of the confessor’s own duty, which leaves all the responsibility on the penitent. He sounds like a civil servant simply reading some regulation to someone and then saying it’s up to you what you do with it. I am not telling you that should follow the law. I’m just reading it to you and explaining its meaning in case you can’t read or can’t understand its meaning.

What the confessor never does is try to help the penitent properly and correctly form her conscience, that is, in accordance with the teaching and law of the Church. He simply dodges that in favor a totally subjective understanding of the obligation to follow one’s conscience, which properly understood is indeed the teaching of the Church. It’s so easy on the confessor: Whenever you face a hard teaching, just throw the whole thing back on the penitent’s subjective conscience. At least where the Sixth Commandment is concerned. Would such a confessor give the same advice if the penitent was confessing a temptation to murder – “I will only read the Fifth Commandment to you, but then you must follow your own conscience on this matter.”

In this mishmash of confessional “advice,” there are two exit points from the Church’s discipline as related to Communion for the divorced and civilly remarried: private conscience and easy annulments. Follow your own conscience has been the escape clause for confessors to properly handle confession of common sexual irregularities  – and still remain popular. It has long been the practical pastoral solution for bishops and priests who wanted to hold on to their jobs and also be loved by those who reject Church teaching on contraception. That’s where all this “just follow your own conscience” advice really got started, even before Humanae Vitae and Vatican II.

Indeed, one way to interpret the efforts of the progressive bishops and the birth control commission to change the Church’s moral teaching on contraception is that they were simply trying to solve a problem for confessors and a teaching problem for intellectuals and prelates. Catholics were already practicing contraception in large and growing numbers by the end of the Second World War, and this trend exploded with the production of the pill just a few years before the Council. The easy solution was to change the teaching of the Church and “liberate” confessors and teachers from this teaching.

A similar post facto solution is being applied today with the divorce and remarriage problem, since more and more Catholics are in this situation. But if they are already free – via private conscience – to receive Communion, as many believe themselves to be, among those who bother with the Church at all, why the big effort to change the discipline? My friend suggests that it most likely has to do with the paychecks of Church employees, as more and more such employees divorce and remarry, but want security in their jobs.

Under present Church discipline, the divorced and civilly remarried cannot hold Church positions. What a problem that must be for German Church employees. Is it any wonder who is leading the charge for change at the Synod?

About Fr. Mark A. Pilon

Fr. Mark A. Pilon, a priest of the Diocese of Arlington, Virginia, received a Doctorate in Sacred Theology from Santa Croce University in Rome. He is a former Chair of Systematic Theology at Mount St. Mary Seminary, a former contributing editor of Triumph magazine, and a retired and visiting professor at the Notre Dame Graduate School of Christendom College. He writes regularly at littlemoretracts.wordpress.com.