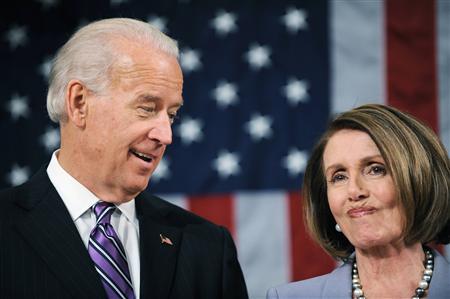 As the race for the White House gears up, all eyes are on the presidential contenders, and there has never been a larger crop of Catholics either already in the race, or waiting in the wings. If anyone wants to get a glimpse into the contemporary Catholic Church in the United States, the range of Catholic politicians reflects the amazingly diverse and difficult variety of American Catholics.

As the race for the White House gears up, all eyes are on the presidential contenders, and there has never been a larger crop of Catholics either already in the race, or waiting in the wings. If anyone wants to get a glimpse into the contemporary Catholic Church in the United States, the range of Catholic politicians reflects the amazingly diverse and difficult variety of American Catholics.

The “conservative Catholics” are best represented by Senator Rick Santorum. A life-long Catholic, Santorum became more serious about his faith after marrying. Now a daily mass attendee, Rick Santorum has put his Catholic faith at the center of his conservative political life. With a strong appeal to conservative Evangelical voters, he is consistently disappointed by the lukewarm reception he receives from fellow Catholics. With strongly conservative opinions on defense and foreign affairs, Santorum is also an outspoken opponent of same-sex marriage and abortion. The sympathy for his family during a health crisis of his disabled daughter revealed a softer side to Santorum and strengthened his pro-life credentials through personal experience.

Also lined up in the Evangelical Catholicism camp is Republican Marco Rubio. A junior senator from Florida, Rubio is the son of Cuban immigrants. For a time he abandoned his family’s Catholicism for the Mormon faith and then became more committed to Christianity through attendance at a large Evangelical Protestant Church. Recently, however, Rubio and his family have returned to a regular and fervent commitment to Catholicism. Rubio retains strong friendships within the Evangelical church and like Santorum will appeal to conservative voters in both the Catholic and Evangelical communities. With his Cuban background, Rubio adds to the conservative Catholic brand a strong Hispanic appeal, and as such represents the growing presence of the Hispanic Catholic population in the United States.

Jeb Bush, the brother and son of former presidents, and the former governor of Florida also has a strong Catholic Hispanic appeal through his wife, Mexican-born Colomba. Bush converted to Catholicism through his wife’s influence and attributes his strong pro-life stance and conservative views on family issues to his Catholic faith. Bush also represents another dominant stream in American Catholicism: the Catholic convert. With an increasingly influential voice in American Catholicism the converts from Protestantism blend Evangelical fervor with a deep Catholic commitment and are a force to be reckoned with.

Another Catholic convert who could be a presidential contender is Louisiana Governor Bobby Jindal. Jindal is the son of Indian immigrants who converted to Christianity in high school and then to the Catholic faith in college. While not yet declaring an intention to run for president, Jindal has been named by many conservatives as a strong candidate. As the first Indian-American state governor and as a Rhodes scholar at Oxford he has intellectual muscle, and reflects both the more learned side of American convert Catholicism as well as it’s increasingly diverse and multi-cultural dimension.

Catholics who are also named as possible Republican contenders are former Vice Presidential candidate Paul Ryan, New Jersey governor Chris Christie and Kansas Governor Sam Brownback. Brownback is a convert to the Catholic faith while Christie and Ryan are life-long Catholics. All three take pro-life stances, with Brownback recently signing a strong anti-abortion bill in his state. Fiscal conservatives, they represent the new wave of Catholics who have shifted from their traditional allegiance to the Democratic Party.

American Catholic politicians however, are not all conservative. Martin O’Malley, the former governor of Maryland is weighing a run as candidate for the Democratic Party. Although he claims an Irish Catholic heritage, O’Malley signed a bill as governor green-lighting same-sex marriage. When the Archbishop of Baltimore challenged him O’Malley replied, “I do not presume, nor would I ever presume as Governor, to question or infringe upon your freedom to define, to preach about, and to administer the sacraments of the Roman Catholic Church. But on the public issue of granting equal civil marital rights to same-sex couples, you and I disagree.”

Although not in the race for the Democratic nomination, other high-profile Democrat Catholics who might run are former Speaker of the House Nancy Pelosi and Vice President Joe Biden. Both take typical progressive views on pro-life and family issues. Despite claiming to be “faithful Catholics” Pelosi and Biden are consistently pro-abortion and in favor of same-sex marriage. While they might appear Catholic on peace and justice issues, they have cheerfully and publicly disagreed with both Pope Benedict and Pope Francis. Pelosi, Biden and O’Malley reflect the other major stream in American Catholicism: cafeteria Catholicism.

The three Democratic Catholic politicians, like the members of the Kennedy dynasty, are all products of cultural Catholicism in American, whereas the Republicans are either converts or committed reverts to their Catholic heritage. Therefore the level of understanding and commitment to Catholic teaching is of a very different order among the Republican hopefuls than among the Democrats.

The range of Catholic politicians, from Santorum and Rubio to O’Malley and Biden, reveals the true complexion of American Catholicism. Many observers have said that it is as if there are really two Catholic Churches in America: a dissenting “progressive” church and a faithful “conservative” church. With very different understandings of what it means to be Catholic and what it means to be American, the conflicting political and social opinions amongst the Catholic politicians will make for a fascinating and contentious national debate in the coming nineteen months.

Read Fr Dwight  Longenecker’s blog, browse his books and be in touch at dwightlongenecker.com